This section explains the usual gestation period of around 63 days after the first mating, and what signs to look for just before she strains and starts producing pups. But with some bitches the whelping can be earlier.

Can a bitch whelp outside the 'normal' 63 days? 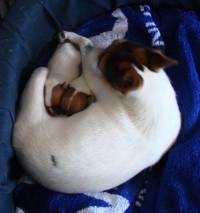 Yes. Three days early is within the realms of normality for average sized breeds but with some small breeds, bitches can whelp up to 5 days early, that is 58 days after the first mating, and the pups survive. However, it is unusual with a whelping earlier than 58 days for the pups to be sufficiently developed to survive.

On the other hand, an overdue bitch that is a bitch that has not produced any pups by the 63rd day after the first mating is a reason for concern. If there are no signs of the bitch showing signs of being in labour by the 63rd day, it is recommended that veterinary advice is sought. Veterinary advice should also be sought immediately should there be any signs of blood or a green discharge before labour has commenced.

But as a general rule, provided the bitch shows no signs of distress, has no blood or green coloured discharge, and the 63rd day after mating has not been reached, there is no reason for concern. However, with modern technologies like ultrasound, if you are worried it does not harm the bitch to consult a veterinary surgeon. It is important your mind is at rest so your bitch can concentrate on the job her instinct is telling her to do.

What are the first signs of labour?

The first sign of imminent labour is usually a drop in the bitch's body temperature which is normally 38.6 degrees Centigrade or 101.5 degrees Fahrenheit. A temperature drop of around 2 degrees is usual a day or two before the bitch begins to strain. Some bitches refuse food during this period, some scratch around in their bed, and some just pant and shiver. An observant breeder will notice some or all of these signs. It is important to have a warm room and/or bed ready, so the pups and mother can be kept at around 21 degrees C or 70 degrees F during the birth and at least for the first critical week or so.

The raising of a litter of puppies from 3 days before the bitch is due to whelp up until the point of sale is clearly explained in our DVD 'HOW TO RAISE A LITTER OF PUPPIES'. However, it is hoped that these discussions will assist in consideration of some of the more contentious issues surrounding the correct handling of the most important and vital process surrounding the marvellous experience of a bitch giving birth naturally.