The Weimaraner is an old European hunting breed. Probably descended directly from the ancient grey French Scent Hounds of the 13th Century, the modern pure breed Weimaraner and the Weimaraner Longhair have unbroken records which date back to the 1860's. Today, their distinctive grey colour and functional shape makes them unique among Gundogs. 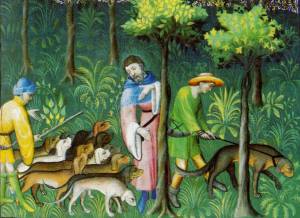 It is documented that Louis IX of France (1226 - 1270 AD) owned a pack of Scent Hounds which were grey in colour and known as 'the Grey Hounds of St Louis'. In the 13th Century when Scent Hounds were favoured, hunting was not just the sport of aristocrats. Hunting was also a necessity when food was scarce.

Grey Scent Hounds have been used to assist with hunting since the 13th Century when the old type hunting dog which worked in front of the pack was called a 'Brache', 'Leithund', Leash Hound or Lead Hound. These Scent Hounds tracked the smell the prey left on the ground, like the one pictured here. This illuminated manuscript 'Le Livre de la Chasse' by Gaston Phoebus (1331 - 1391 AD) shows a huntsmen with a 'Lead Dog' on the leash with the other dogs in a pack following behind. 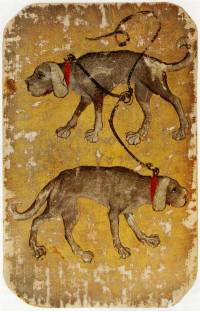 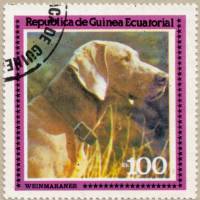 So the various types of dogs, or 'races' are they are more commonly called in Europe developed according to the terrain and the size of the game these dogs were designed to hunt. Falconry, nets, spears as well as bows and arrows were used in this period which pre-dated the invention of guns.

The Grey Scent Hounds of Europe, like the pair coupled together on this 13th Century playing card, which were used for tracking the scent of wild boar and deer on the ground, were likely ancestors of the Weimaraner[1]. But Scent Hounds which are grey in colour should not be confused with the breed we know today as Greyhounds. These Sight Hounds, probably Egyptian in descent, and tracked the prey by air borne scent. They came in any colour and are much lighter in general build as well as in the head and flews than the European grey coloured Scent Hounds. Sight Hounds work differently to Scent Hounds and chase wild prey like gazelle and bring them down, so assisting huntsmen to kill them.

History of the Weimaraner 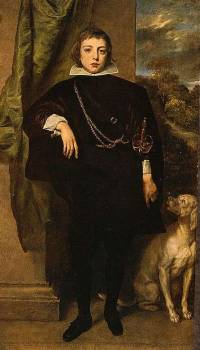 By 1631 Van Dyke, a student of Rubens painted one of these grey Scent Hounds which was a probable ancestor of the Weimaraner. The beginnings of any of the breed we know it today are only as old as their records. Before the 1800's the predecessor of the Weimeraner, the grey coloured Weimar Pointer was commonly used for large game hunting like wild boar and deer. As the large estates broke up, hunting birds and small game became more popular amongst the Germans of the 1800's. These dogs, with their natural hunting tendencies of strength, tracking skills, speed and courage, were easy to work with in the field and in water, as well as making ideal companions at home. 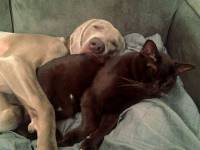 Weimar, the capital city of Thuringia, is an area where several popular German breeds had their beginnings. The modern Weimaraner as a pure breed began with the Grand Duke Karl August, head of the Court at Weimar, born in 1757. The people who made up the Court of Weimar followed the Grand Duke, Karl August, in attempting to perfect the hunting talents of their dogs. Their breeding was a closely guarded secret for decades.

The Weimaraner becomes a Pure Breed

From 1860, hunters from the local district conducted a 'dog market' each year just a short distance from Weimar. This continued until the beginning of World War Two, sponsored by a group organised specifically for the promotion of pure breed dogs. The first dog show in Germany was held in Hamburg 1863. Then German Stud Book was founded in 1876[2] containing an unbroken line of Weimaraner pedigrees until 1924[3]. But although the Weimaraner Club of Germany was formed in 1897, the Breed Standard including the Longhair[3] was not adopted until 1935. 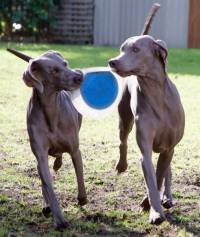 Playing with a frisbee

Then came an important period in the development of the Weimaraner as a pure breed because it coincided with a time of political turmoil in Germany. Called the 'Weimar Period', the rise of Hitler sadly affected all arts as well as dog breeding because of the mandatory burning of so many books and records. But somehow, two typed folders of Weimaraner pedigrees from 1940 - 1944 survived. These folders were mainly the work of Major Robert Herber who had been President of the German Weimaraner Club since 1921. After World War Two concluded, many American soldiers returned home taking with them Weimaraners with verified pedigrees. This secured uninterrupted records of Weimaraner pedigrees from 1924 to the present day[3].

History of the Weimaraner Longhair 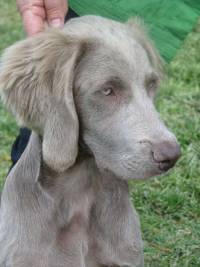 The Weimaraner Longhair has also been documented with records dating from the 1860's. This was probably caused by an infusion of other German Hunting breeds a long time ago when hunting dogs that served the same purpose were bred together[3]. At that time purpose was more important that physical looks. 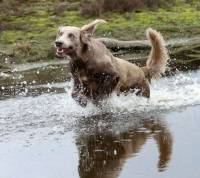 Today the Weimaraner Longhair is the result of a single recessive gene, so it needs both parents to carry this gene in order to produce it. But certainly today the Longhairs appear in the same litter as their short haired counterpart and the two varieties can be bred together.

History of Weimaraners in Australia

From a subsequent litter from the original pair, Graf and Fidget, the well-known Gundog judge, Mr Jack Pontin acquired 'Passeau Silver Wraith'[4]. This would have greatly assisted the recognition of the Weimaraner here both in the show ring and in the field. As these were the first Utility Gundogs to arrive in Australia, they had to compete in Field Trials alongside the English Specialised breeds of Pointers and Setters. But for registration and show purposes, fortunately Weimaraners were classified as 'Gundogs' and not 'Hounds' as predicted by 'Skipper' Taylor when first announcing their arrival. 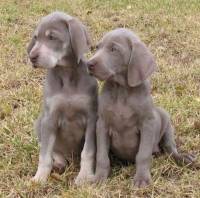 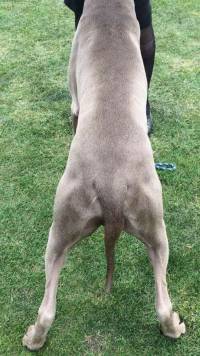 The Weimaraner is a medium to large sized grey utility gundog, standing 57 - 67 cms (22 - 26 inches) tall and weighing 25 - 40 kgs ( 55 - 88 pounds). He comes in two varieties, Weimaraner which has a smooth coat and the Weimaraner Longhair. But his most defining feature is his colour which must be grey. This means it must be shades of silver, roe or mouse grey with the head and ear leathers slightly paler. But he must be neither blue which also usually affects the colour of the eyes and nails[6a] nor have yellow or reddish points like the pup pictured. Only small white markings on the toes or chest, or seasonal coat changes like the 'eel stripe' of a darker shade of grey which runs down the back, are permissible.

Head and Neck of the Weimaraner

The skull must be in balance with the size of body, so is broader in dogs than in bitches. The throat and clearly defined cheeks are clean, the occiput visible, and the median groove or fluting down forehead ends in a slight stop. The nose is large and protrudes over the underjaw. It is of a dark flesh colour which merges gradually into grey colour of the skin where it joins with the bridge of the nose. 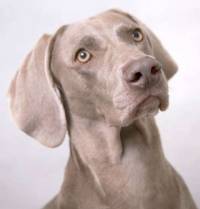 The muzzle and jaws are long and powerful and close in a normal scissors bite. The bridge of the nose is straight or slightly arched, but never concave. The flews are moderately deep, with the lips and gums flesh coloured. The dropped ears should be broad, lobular in shape but rounded at the tip, and have sufficient length to reach the corner of mouth. The ears are set on high but when the dog is alert, they turn forwards and fold. The round eyes are dark to pale amber in colour with tight fitting lids showing no haw. In puppies the eyes are sky blue. 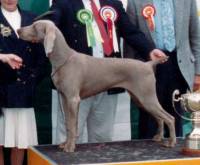 The neck is sufficiently long to balance the dog and carry the head proudly, so enhancing the Weimaraner's noble appearance. In profile, the arched neck flows over well the defined withers into a topline that merges gradually into the relatively long, firm back. The shoulders are long, sloping and well angulated at the point of shoulder.

Body of the Weimaraner 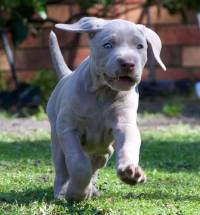 Even in puppies, the front legs should look straight, parallel and sinewy when viewed in profile or from the front. The pasterns are also sinewy, but should have sufficient slope to act as the dog's shock absorbers. The front semi-hare shaped feet are firm and strong with light to dark grey nails and well pigmented pads. The hind feet should have no dewclaws. The forechest should be well developed. But the chest itself although not unduly broad, should have sufficient depth to reach almost to the elbows. The ribs should be long and well sprung without the ribcage looking as though it is barrel-shaped.

The back is firm and muscular and of sufficient length to give the appearance of having a body longer than its height at withers in the proportions of 12:11. The croup is long and moderately sloped so the strong, well coated tail is lower set than other Utility Gundogs. But when the dog is alert or trotting, the profile picture of the back remaining level is completed by the tail which is carried level with the back or higher. The underline and belly rise slightly without being tucked up. 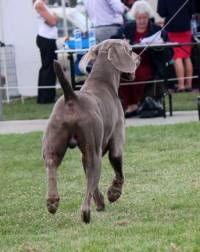 From the rear, the upper thighs should look long, strong and well muscled. The lower thigh should be sinewy leading into strong hock joints and rear pasterns that are parallel and almost vertical. This allows the dog to have a ground covering, smooth trot with balanced reach and drive. But the soundness of the dog's gait also depends on the elbows working free of and parallel to the median plane of the body.

Coat of the Weimaraner

The Weimaraner is double coated but both varieties only have very sparse undercoat. Whilst the short-haired variety looks smooth, the top coat is denser and thicker than the smooth coats of other Utility Gundogs. 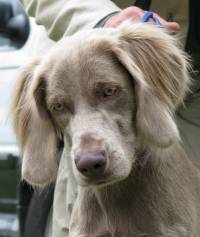 The longhair has topcoat which is straight or or slightly wavy. Whilst the hair on the head is smooth, it is velvety on tips of the leathers and long and flowing at the base of the ears. On the body the flanks, for example can have 3-5 centimetres of coat and it can also be somewhat longer on side of neck, forechest and belly. There is feathering behind the legs and the tail generally has a good flag. Also on the Longhair, the feet have hair between the toes.

[4] Harding & Ryan, 'Searching for Silver Grey' self published 2005 Ghostdog productions 'The History of the Weimaraner in Australia', Pages 7 - 13.