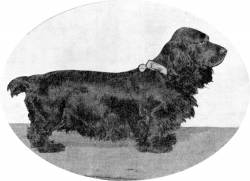 Before Federation in 1901, the huge Colony of Western Australia developed separately from the rest of Australia. At that time, if any dog shows were held, they were conducted in the south-west corner of the State. Until 1945, their only dog club in WA was the Western Australian Kennel Club (WAKC). This situation was different from that in the Colony of NSW where, at that time each State had several different controlling bodies or Kennel Clubs.

Uniquely, the (WAKC), enjoyed affiliation with the Kennel Club of England. This meant its Rules extended to granting titles beyond that of Champion. Consequently, the Field Spaniel pictured carried the prestigious title of Grand Commonwealth Champion. Apparently he accumulated the six Challenge Certificates necessary under the Kennel Club of England's rules for him to become a Grand Commonwealth Champion[4a]. This dog, Bonnie Union Jack was imported into WA in 1906 by Mr Ralph Potts[5].

The Royal Agricultural Society of WA, which had been holding Shows since the 1830s,  probably hosted WA's earliest dog shows. Although records are difficult to find, the 1898 'West Australian' newspaper recorded that a particular Airedale Terrier that I had been researching had won a first prize at a Show[1]. Additionally, by1911, it was reported that 120 dogs competed in their 'Royal' Show[2]. This obviously preceded the WAKC becoming affiliated with the English Kennel Club' because records document that the WAKC was founded in 1912 and conducted its first Championship Show in 1914[4].

Affiliation with the English Kennel Club had at least two advantages over the dog clubs in the Colony of New South Wales. These were:

Meanwhile, the RAS of WA, which had been holding Agricultural since at least 1834, probably also hosted WA's early dog shows. Although the year the year they included dogs remains unclear, by 1905 when the RAS of WA had moved to the Claremont Grounds in Perth where, by 1911, 120 dogs competed in their 'Royal' Show[2]. During his time, the RAS of WA also established Stud Books for breeds of cattle and sheep throughout the State.

Because of this experience in establishing Stud Books, in 1945 when there was an upsurge of interest in purebred dog activities, the WAKC put in place an arrangement for the RAS of WA to take over over the WACA's Secretarial duties  for a fee. The WAKC became the Canine Association of WA (CAWA).  In 1952, the CAWA was re-constituted with the right for either party to terminate after giving six months notice.

The CAWA grew in membership under this arrangement. The highlights were

After much turmoil, in 1977 the CAWA broke ties with the RAS of WA and became an independent body. In 1988 WA was linked to the NSW registration system. Today the controlling body for Western Australia is still the CAWA which trades as 'DogsWest'. 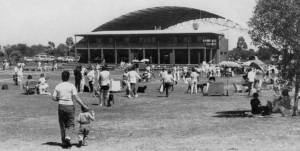 Dog Showing Complex, WAWestern Australia is unique in that, in 1980, just 16 km south of Perth, the capital city of WA, a 14-acre bush block was designated as a 'Kennel Zone'. It provided 25.3 km² where dog activities associated with breeding and boarding dogs could be conducted without a  permit. In the built-up areas in the rest of Australia a permit is required to keep more than two dogs. Additionally, in 1987 the CAWA built the wonderful administration complex and undercover dog showing area pictured.

[1] Information supplied by Mr Wright, Albany WA from 'The West Australian' Thursday 12 May 1898

[2] Mr Piesse, President. RAS of WA 'A Century of Shows', Article published as Foreword in the 1934 Perth Royal Show Catalogue.