History of the Chow Chow

The now extinct prehistoric dog-like mammal the 'Simicyon', appears to have influenced Chinese breeds to have have broad skulls and wide mouths[7], as seen in the development of the Shih Tzu, Lhasa Apso and Tibetan Terrier and Asian Toy breeds. Perhaps this "Pei' dog influenced the transition of the early Esquimaux dog to produce dogs of Chow type in China which looked like the ancient Grave Statue pictured on the left. For centuries, the Chow Chow was:

"... a good second to his master in the operation of capture. Ever distrustful of strangers, he is the faithful guardian of his village, wakeful and noisy at night, sleepy and persecuted during the day. He is brave in the defence of his home, keen of nose, and untiring in the chase, though sorely oppressed by the warmness of his heavy coat, necessary as a protection against the thorns and prickly creepers which tangle his native thickets. His powers of scent are used today in the capture of birds for the table, just as, in all probability, before the European bird-dog was invented"[1a]

Because the name 'Chow' in modern language is usually associated with food, there is a perception that this dog was primarily bred for human consumption. Although many centuries ago this may have occurred, it is more likely that the name Chow Chow originated from "pidgin" English which was the language of trade used in Chinese ports in the early 1700's to describe anything that was traded especially spices like ginger[1]. 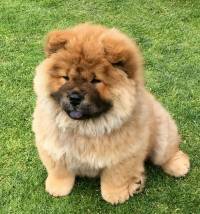 By the late 1700's the Chow Chow had become known as an all-purpose type of dog commonly seen roaming not only around the streets of the cities, and also throughout the countryside. In 1790 the Chow Chow was first brought to England by the East India Trading Company. In 1802 White wrote the following description:

"... they are about the size of a moderate spaniel; of a pale yellow colour, with coarse bristling hairs on their backs; sharp upright ears and peaked heads, which give them a very fox like appearance. Their hind-legs are unusually straight, without any bend at the hock or ham, to such a degree as to give them an awkward gait when they trot. When they are in motion their tails are curved high over their backs like those of some hounds, and have a bare place on the outside from the tip midway, that does not seem to be matter of accident but somewhat singular. Their eyes are jet-black, small and piercing ; the insides of their lips and mouths of the same colour, and their tongue blue.... These dogs bark much, in a short, thick manner, like foxes, and have a surly, savage demeanour, like their ancestors... " [1a] 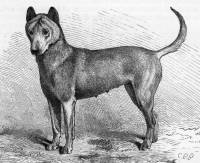 In 1828 the London Zoo acquired some as a curiosity. Despite records of being exhibited at Birmingham and other Shows, it would be 1894 before the Kennel Club (UK) finally recognised them. From the earliest times the Chow came in both rough and smooth coats. Both coats displayed the characteristic 'Scowl' the first description of which was 'loose skin on the forehead accentuated by slight differences in pigmentation'.[2]

History of the Shar Pei 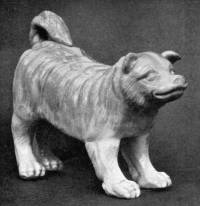 Statues of wrinkled dogs like the one pictured bearing a strong resemblance to the Shar Pei date back to the Han Dynasty (c 200 BC). Others have been discovered in Tai Li, a small village in the Southern Province of Kwantung, which borders the South China Sea. More recently a 13th Century Chinese manuscript refers to a wrinkled dog. The name 'Shar Pei' literally means 'sand skin', referring to the roughness and shortness of the coat[8].

The Shar Pei's survival as a pure breed today relied on Hong Kong becoming a British Colony in 1842. This was because by one century later, the Chinese Communist Party had eliminated dogs from most of China[6]. But fortunately, because in the meantime the Hong Kong and Kowloon Kennel Association had recognised the Shar Pei as a pure breed in the 1970's, they were able to provide bloodlines for the rest of the world to resurrect the breed[3]. They were introduced into Australia in the early 1980's[5a].

History of Chow Chows in Australia

Chow Chows were among our earliest exotic breeds to be imported into Australia with 5 arriving between 1907 and 1911 and another 7 listed in Tyzack's Stud Book[4]. Archival records of Melbourne Zoo also record that at least 7 'Chinese Dogs' were on display[5]. 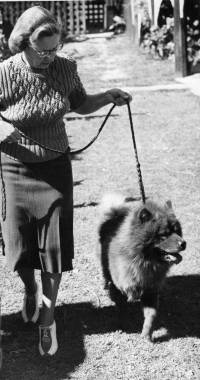 Before the outbreak of World War Two, another 12 Chows were recorded as being imported from UK[9]. This was remarkable considering the only way these dogs could travel was by sea which could take up to 3 months. Two separate newspaper clippings tell different stories of this long voyage. One reports a top winning dog breaking its chain and disappearing overboard, while another reports that two prized dogs

"... enjoyed a deluxe passage, receiving better service and attention than passengers in First Class! They were fed raw spinach and special food preparations throughout the voyage. In the tropics they were bathed three times a day and for most of the voyage. Their attendants, an elderly English couple, slept on the open deck to be near them. This couple jumped at the chance to migrate to Australia when two elderly Hurstville women offered them the job of caring for the two Chow Chow dogs they were importing"[10] 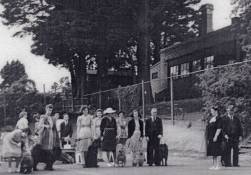 In 1934 the Chow Chow Club of Australia was formed. By 1940 this had became became the Chow Chow Club of Victoria, holding their first Open Parade at the home of Mrs J Helpmann, who became their first Patron. She was also the mother of the famous multi-talented, Sir Robert Helpmann. With such patronage, the fame of the Chow Chow spread to every State in Australia. For example by the 1940's, Queensland dog Ch Red Dragon of Macreag (pictured above left) had won at least 81 First Prizes and 33 Challenges.

Comparison between the Chow Chow and the Shar Pei

The unique features of the Chow Chow are

The unique features of the Shar Pei are

[9] E.M.Simpson and Phillipa (Betty) Pierce 'History of the The Chow Chow in Australia' Self Published 1995