The Kangaroo Dog was vital to the survival of our earliest settlers which played an integral part of early Australia. Today it is but a distant memory. This article traces its history which certainly had all the essentials of becoming an iconic Australia pure breed. But its demise is a sad story of political correctness combined with the Great Australian Cringe. 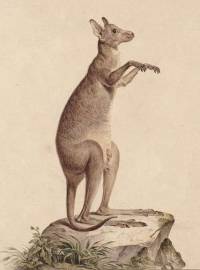 Captain Cook arrived in Australia in 1770. His ship, 'the Resolution', carried 85 passengers including the Botanist, Sir Joseph Banks who described many of the diverse plants and creatures he found living in Botany Bay. Among them was a 'strange animal' called a 'Kanguroo'. This name was believed to have been derived from the gangurru, a Guugu Yimidhirr Aboriginal word referring to the Grey Kangaroo.

"To compare it to any European animal would be impossible as it has not the least resemblance of any one I have seen. Its fore legs are extremely short and of no use to it in walking, its hind again as disproportionately long; with these it hops 7 or 8 feet at each hop in the same manner as the Gerbua, to which animal indeed it bears much resemblance except in Size, this being in weight 38 lb and the Gerbua no larger than a common rat[1]". 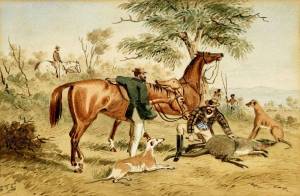 In 1788, Governor Phillip arrived with First Fleet consisting of 11 ships containing almost 1,000 people[2]. His personal belongings included Greyhounds which were used for hunting. As this was a Century before shotguns came into general use, squatters learned to survive on whatever they could find to eat. Considering it would be years before farms would become sufficiently established to feed the growing white population, kangaroos became a vital food source:

In the early days of Australia, when game was cheap and flour expensive, it was a common saying amongst the hospitable bushmen to their guests: 'Pitch into the kangaroo, boys and spare the damper'.

Powder and shot were also very expensive. Consequently had it not been for the kangaroo dogs, the bushmen and their guests would not have had any kangaroo meat to pitch into. So next to bullocks, stringybark, and greenhide, the kangaroo dog helped settle the country[6]. 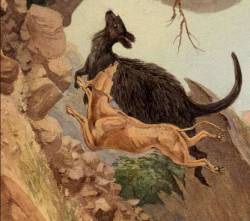 By 1793, Arthur Philip's marine officers complained that English Greyhounds were incapable of bringing down kangaroos, wallaroos  and the myriad of other different sized marsupials which carried their young in a pouch. Hunting with dogs provided fresh meat for our early settlers.

Consequently, a Kangaroo Dog was developed by crossing Greyhounds with early British hunting dogs which were named Deerhounds etc. according to the prey they were bred to hunt. The result was a large, strong hunting dog weighing up to 80 pounds. It had the Greyhound's speed combined with the large, strong bone.

If confronted by one dog acting singularly as shown[8], the kangaroo would use its front legs to grasp the poor dog and quickly disembowel it with its lethal hind claws. To avoid this, successful Kangaroo Dogs instinctively devised a special way acting in pairs to upend the kangaroo and then kill it.

How the Kangaroo Dog Worked

At an estimated speed of 40 kph, the faster dog would position itself close behind and to the side of the kangaroo and grab the base of its tail on the upward leap. In this way, the kangaroo would fall head-long into the ground. The second dog would then leap upon the kangaroo from behind and break its neck. Because so many brave dogs were maimed or killed by the kangaroos, those dogs which survived were bred with. Consequently, the Kangaroo Dog was developed with the instinct vital for its survival and that of our early settlers[3]. 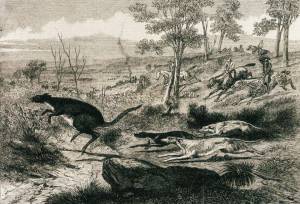 'This dog is essentially Australian, in fact, may be called the national dog of Australia. In the early days, everything was hard to get in the bush - flour was at a premium, (gun) powder and shot (were) not to be lavishly expended, and sheep were not to be killed except in some dire emergency. Kangaroo were plentiful... good to eat, and a dog who was fast enough to kill them, saved mutton, flour, (gun) powder and shot. A good Kangaroo Dog, therefore, was often a perfect godsend to a struggling squatter'[4]. 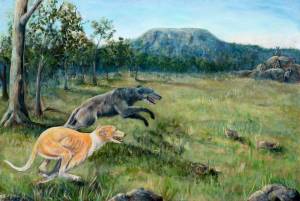 Word Pictures of the Kangaroo Dog are as few and far between as early drawings. With no Breed Standard ever written, no Stud Book records, no photographs and precious few paintings, we have to rely on early writings.

At the first dog show recorded in New Zealand in 1882, this early Word Picture is assumed to have been written during the 1850's, was when the Canterbury Dog Club held a Show under the auspices of the Papanui Coursing Club. It read:

'They were big, bony dogs with light shaggy coats, their colours ranging from whitish fawn to brindle iron-grey and black. They were imported from Australia to New Zealand to kill the wild dogs which had become a menace to run holders and their sheep. They were declared to be as game Bulldogs, fierce as tiger cats and match any kangaroo that leapt over the plains. They were also one of the few canine species that would kill a bitch'[5].

In his book 'Barkers and Biters' (1914) Robert Kaleski wrote:

The first dogs were very bog bony devils with a light coat of shaggy hair. They ran by both scent and sight... they are nearly all yellow or brindle, with an odd black one.. after about 15 years the breed began to get lighter in coat owing to the climate; continued doing so until now they are now as smooth and shapely Greyhounds, although just as big as ever [10].

The Kangaroo Dog becomes a Pure Breed in England 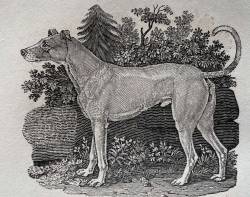 In England in 1873, King Edward VII who, at that time the Prince of Wales, became patron of the Kennel Club. He exhibited a 'Kangaroo Hound' at the 2nd International Show, London in May 1864[13]. Consequently, the dog was registered in the 1st Kennel Club Stud Book in the 'Foreign Hound' section.

The following Word Picture was written:

Also, in 1864 at the first Dog Show held on the Australian mainland, 5 Kangaroo Dogs (Rough) and 13 Kangaroo Dogs (Smooth) were entered[11]. By then, these dogs were clearly established and it was recorded they had 'strong limbs and chests with an evident capacity for speed and endurance'.  The following year, in 1865, 8 Rough and 15 Smooth were shown. However it was reported that the Roughs were so poor that the first prize winner was the only one awarded any prize.

In 1872, at the National Grand Spring Exhibition (which was later given the name 'Royal Show'), there was one Kangaroo Dog entered, but it's coat type was not specified. The 'Argus' newspaper 25 October stated 1872 stated:

'First on the list of Sporting Dogs was the class for Kangaroo Dogs, in which there was only one exhibit, which was judged not worthy of a prize. As the best Kangaroo Dogs were always bred from Scotch staghounds ('stag' being a male deer], it was scarcely worth while offering a prize for this class'. 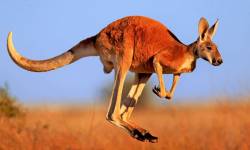 'For the information of those outside our colonies, and perhaps a few in it whose lives have been spent in the cities, I may say that the name kangaroo dog is applied to any large mongrel which can catch or assist in running down kangaroos. In the early days when these indigenous animals were plentiful - in fact, pests - all sorts of dogs were bred for the purpose of destroying them, the cross chiefly used being that of a Deerhound and a Greyhound'[7].

He then added that they were:

'sometimes adjudicated upon by English judges who have never seen a kangaroo extended out of a "gentle hop' in the Zoological Gardens"[7a].

The Demise of the Kangaroo Dog 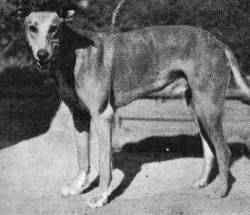 Kangaroo Dogs had thrived in wide open spaces, catching sufficient food for squatters and lonely convict labourers who had been forced into the job of shepherding. Additionally when these dogs were kept as household pets, they were handy protection against dingos, desperate convicts and robbers who stole sheep. Kangaroo Dogs that were successful in these roles were bred and sold to others who needed them.

However, by the late 1800s, fencing surrounded huge paddocks. By this time lamb and beef had also replaced kangaroos for meat. Guns had replaced the necessity to use dogs for killing game. Additionally as kangaroo skin had also become so popular as a fashionable product, the Kangaroo Dogs' job was done. People no longer kept them even as pets. After all, it was much more socially acceptable to keep fancy British pure breed dogs! 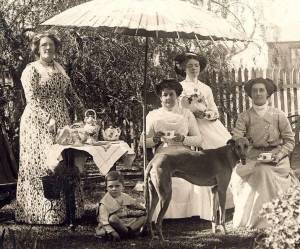 Typical of Scent Hounds, the Kangaroo Dog's basic instinct is a sweet-natured, gentle dog totally trust-worthy when kept in a domestic situation. Instead, in order to survive and serve its master, the Kangaroo Dog  learned to do the most brutal job imaginable against our innocuous looking but dangerous marsupial. These brave dogs died in their thousands learning to kill kangaroos to feed the early explorers who paved the way for our pioneers. With their job redundant, they were abandoned like rusty tools. Some Kangaroo Dogs became so desperate for food they even killed sheep. Then they were saddled with a bad reputation. Consequently, through no fault of their own, Kangaroo Dogs became extinct.

Kangaroo Dogs have never been acknowledged for the critical part they played in in establishing this country. Instead they were despised because of it. Anywhere else in the world, this breed would have been revered by thousands of admirers keeping his image and the memory of his job alive. Instead, typical of our Great Australian cringe, the kangaroo dog is now but a distant memory.