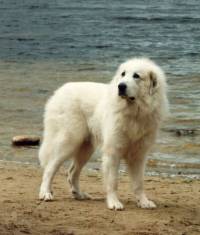 The Pyrenean Mountain Dog earned a special place in Australia's history as our first resident Livestock Guardian Dog. He filled his traditional role just 50 years after the first British settlement. Hence he played a significant role in Australia's fledgling sheep industry. His continuous presence here has been documented ever since.

History of the Pyrenean Mountain Dog

The original purpose of the Pyrenean Mountain Dog was that of transhumance, which was an ancient practice. In search of better pastures, sheep were moved sheep up mountains in summer and back into valleys in winter. But as the numbers of wolves and bears disappeared, the dogs' numbers declined. In the case of Pyrenean Mountain dogs, these dogs were then adopted as companions and watch dogs and named 'the Royal Dog of France'![1]. 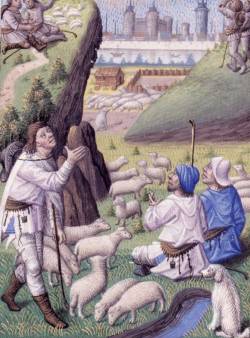 In his 'Book of the Hunt' by Count Gaston Phoebus (1387 - 1389 AD) there are illustrations of a large white dog like a Pyrenean guarding at least 3 different Châteaux in France - Foix, Orthez and Carcasonne, located at 3 separate districts in France. Additionally, this wonderful French picture by Maître Francois produced around 1476 AD, clearly illustrates a large white Livestock Guardian Dog watching over a flock of sheep.

In 1675 these dogs' 'haughty looks' were described by the Court of Louis XIV in Versailles. Apparently, Madame de Maintenon was accompanied to the waters of Barèges by the young Duc du Maine (the illegitimate son of Louis XIV and Mme de Montespan) and returned to Versailles with an 8-month old Pyrenean puppy. Two years later, the Marquis de Louvois (minister for war) acquired a Pyrenean at Betpouey. This caused such a sensation that the Pyrenean became a favourite of aristocrats at Versaille and in the provinces[3]. 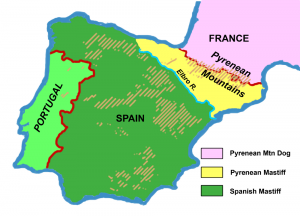 Areas Where these Breeds Developed

History of the Pyrenean Mastiff

The Pyrenean Mastiff moved flocks up the mountain range on the Spanish side of the Great Pyrenees in the summer, and brought them back to the shelter of the villages in the winter, north of the Ebro River. The Pryenean Mastiff could have been influenced by the third breed famous in the Iberian Peninsula, the Spanish Mastiff.

In Spain, the numbers of wolves and bears also declined. Then came the Spanish Civil War and WWII. So the Pyrenean Mastiff came near to extinction. But due to the efforts of Señor Rafael Malo-Alcrudo, the breed was resurrected and the Pyrenean Mastiff was recognised as a pure breed by the FCI in 1982 and in Australia in 2002. 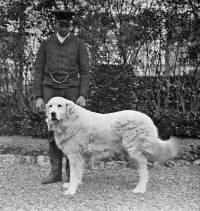 Count Henry de Bylandt, wrote the first Pyrenean breed standard in 1897. Then, from 1902, Monsieur Théodore Dretzen became involved. He searched isolated parts of the Pyrenean Mountains and found sufficient numbers dogs of the original breed type to establish his Zaiella kennels at Bois-Colombes, near Paris. He exhibited his dogs successfully, his most famous dog Ch Porthos who is pictured here was exhibited from 1907 when two Pyrenean clubs were formed[4]. The first was the Pastour Club founded at Cauterets by Dr Moulonguet, Jean Camajou and Bernard Sénac-Lagrange and under the presidency of Baron de la Chevrelière. They published the first French standard. The second the Pyrenean Dog Club was founded by de Bylandt, Dretzen and Eugène Byasson. 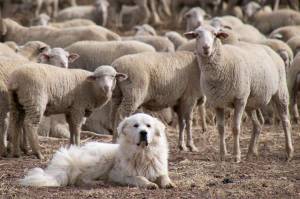 After World War One, the rivalry between these two clubs was put aside and, in 1923 la Réunion des Amateurs de Chiens Pyrénéens (RACP) was formed. Bernard Sénac-Lagrange became its president and successfully lead his group through the task of writing the breed standard. He then accomplished the task of getting the Pyrenean registered with the Société Centrale Canine (the French KC). Today, the Breed Standard is very close to the standard written in 1923 with only a few clarifying amendments[3]. 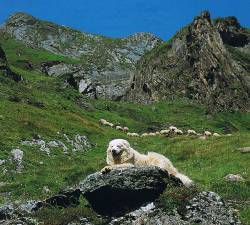 In 1833,17-year-old Irishman, Samuel Pratt Winter travelled to the north of Van Dieman's Land (now called Tasmania) with a friend who owned property near Launceston. There the young man gained farming experience in Australia with the view of establishing a property of his own. He then crossed Bass Strait to investigate a part of Australia which had not previously been inhabited by the British. This area is now known as 'Victoria's Western District'.

In 1842, the young Samuel Pratt returned to England. He then travelled to the Bordeaux of France to the Pyrenean Mountains where Livestock Guardian Dogs had been used to guard sheep for thousands of years. With no fences on his proposed new property in Australia, he knew these dogs would be an asset when used in their traditional role. To this end, he landed the first Livestock Guardian dogs at Portland, Victoria on October 30th 1843.

By this time, Samuel Pratt had a sheep station situated around 80 kilometres north of Portland. Under the care of Pratt's servant, Paddy Hickey, the first arrivals were taken to Pratt's  property which consisted of unfenced wide open spaces. By the 1850's the sheep were put into two flocks which made it easier to look after them. During the daytime, the dogs would take the sheep out to graze in the wide, open spaces. At night, these grand dogs slept between the flocks and guarded them from human thieves and Australia's indigenous wild dog, the dingo. Just how many Pyrenean Mountain Dogs came to Australia as Livestock Guardians in those early days is unknown. But records show these marvellous dogs were certainly bred here and for 35 years, were employed in both Victoria and Tasmania. Unfortunately these original lines died out. 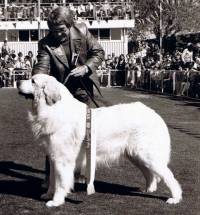 In 1939 although imports came to Australia, only a few litters were produced. But the breed received an injection of new enthusiasm when the Pyrenean Mountain Dog Club of Victoria was founded in 1971. Pryeneans in Australia were then put on the map when Attrill's Wight Beau (imp UK) won Best in Show at the Perth Royal Show in 1973 and Eddie and Ranee Van Eck's Eng & Aust Ch Briarghyll Kelso (Imp UK) (pictured) won Best Exhibit in Show at the 1976 Adelaide Royal Show. Then Pyreneans with the Van Eck's Andorra prefix dominated the show ring here for many years[3]. 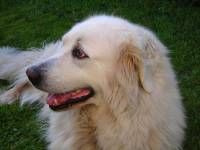 The Pyrenean Mountain Dog still works as a natural guard dog protecting sheep and goats as well as a watch dog for its owners. He is a large, strong and powerful dog yet elegant and noble, standing at least 27.5 inches (70 cm) tall and weighing 110 pounds (50 kg) minimum, with bitches just a couple of inches less but still with proportionate weight. 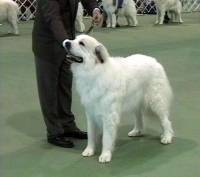 The head is strong without being coarse or looking heavy compared with the rest of the dog. The smoothly curved skull should be as broad as it is long. There should be no obvious stop formed by heavy eyebrows. Instead there is only a slight slope between the skull and the strong muzzle and its black nose. The eyes are almond shaped and dark with close-fitting black oblique eyelids showing no haw. The ears are fairly small and triangular with rounded tips set level with the eyes and lying close to the cheeks. The strong muzzle houses a normal scissors bite, with a level bite tolerated. Sometimes the two lower central incisor teeth are set deeper than the others. The roof of the mouth and lips should be black. 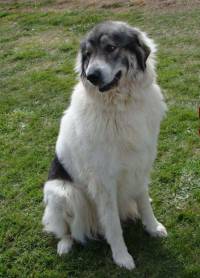 The neck is fairly short with little or no dewlap. He has a powerful body of good length, with medium angles forming both the lay of shoulder and turn of stifle. The forelegs are straight with strong but not excessive bone and short, compact feet with strong nails. The elbows are as close to the chest as his free striding trot with balanced reach and drive allows. The pasterns must allow for flexibility without weakness. The broad chest reaches just below the elbows, with the sides of the ribcage slightly rounded giving the curve of the lower body a definite waist which is more pronounced in the males than the females. The loin is broad and muscular sloping to the croup, giving the topline the impression of gracefully curving smoothly in to the tail.

The hindquarters are broad, strong and straight but the hind feet may turn out just a little. The hind legs must carry strongly made double dewclaws which are a breed characteristic and must be present.

The tail is sufficiently long to reach the hocks, and is carried low unless the dog is excited when it can curl above the level of the back with the tip turned to one side.  The tail is thickly coated like the rest of the dog and forms a plume.

The Pyrenean Mountain Dog usually has a white double coat, the outer coat lying flat or slightly wavy forming a mane around the neck and shoulders and pantaloons at the rear is more obvious in males. Alternatively on the head ears or at the base of the tail there may be patches of badger, wolf grey, or pale shades of lemon, orange or tan. But if there are patches of colour on the body, these must be sparse. Colouring is more obvious on puppies but this fades as the puppy matures.

In summary, the Pyrenean Mastiff is:

My sincere thanks to Helen and Richard Crago for their assistance in compiling this page.