A Dog of many Roles 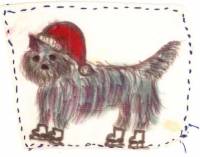 This is a remarkable true story of how adaptable of one little Cairn Terrier can be! 'Jock' adjusted from being a show and breeding dog to being thrown into the role of 'Toto' in a production of 'The Wizard of Oz' on ice. After this, he became my elderly mother's constant companion and 'Hearing Dog'. When she died, he became the resident dog in my sister's kindergarten. If Jock could write, this is how he could have told his story.

Written in the first person, this was first published as a story in May 1987 by the Kennel Control Council of Victoria (KCC) in their monthly Gazette. It was one of the monthly winning entries in a year long short story competition about pure bred dogs. The competition was judged by Mr Laurie Grant, all-breeds dog judge representing the KCC, Mrs Wendy Carlos also an all-breeds dog judge, educator and part time journalist, and Mr Peter Hitchener, professional journalist and TV's well known Channel 9 news presenter. In its original form, this story was called 'My Life through the Eyes of a Cairn Terrier'[1].

Hello! My name is 'Jock'. I was born in a litter of just two. A lot of people came to admire my sister and me, but I seemed to be the favourite. Imagine my dismay when a nice family came and chose my sister to take home! Now I had my mother all to myself. She taught me how to dig holes, and how to make a great fuss of Muriel who brought me my food! Several other dogs lived with us but I was always pleased when Muriel came to see me.

But then Muriel put this thing around my neck! I just sat there. I wanted to go the opposite way. But Muriel was insistent. I tried everything I knew. I rolled over, screamed, and even tried bringing up my breakfast. But the next day out came Muriel again with the lead. I eventually decided when that lead was around my neck, reluctantly, and against my better judgement, I had to follow Muriel.

Becoming as a Show Dog 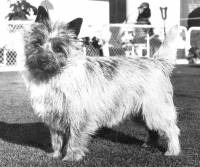 One day Muriel put me on the back seat of her car. I sat and looked out the window. How wonderful! I could see the world! When the car stopped we were at a new place where there were lots of interesting smells. There were also lots of dogs in all shapes and sizes! I growled at the big ones - although some of them had big ugly faces that scared me. But I could not be bothered with the little ones. Muriel took me to an area where we paraded around together with other dogs that looked something like me. I felt so proud to be the centre of attention with Muriel following me at the other end of the lead.

Then Muriel placed me on a table where a man called Mr. Judge talked to me and patted me. Then  and to my surprise, he felt my unmentionables! But we soon all paraded around again, I fluttered my eyes at him. Then Mr. Judge gave Muriel a ribbon. She praised and praised me. I was so pleased. We went to lots of these places by car, sometimes even staying away from home for some days. I loved these outings as it meant I had Muriel all to myself. I am told that is how I became Australian Champion Yiri Nougat Lad. But I prefer to be just called 'Jock'!

Me with Robyn Burley

Then I had several lots of lady Cairns come to visit me. That was great fun because, although some of them snapped at me, Muriel always held them so I could do what I needed to do. I have several Australian Champion children and grandchildren, they tell me.

But then another Cairn took my place. I was left home and the other dog was taken in the car. I was so jealous that I hated him and tried to fight him. Muriel put me in a back kennel. The only way I could attract Muriel's attention was to squeak my rubber toy. I did this constantly, especially if Muriel fed the other dogs before me!

One day, a lady Jane came to see us all. She took great interest in me. So, I squeaked my toy and fluttered my eyes like I did at the Dog Show until Jane said 'that one would be perfect'. She was obviously impressed by my good looks!

Jane took me in her car to a huge ice rink where there were lots of people, but no other dogs. The Iceland Figure Skating Club were putting on a Pantomime based on the film the 'Wizard of Oz' and wanted a Cairn to play the part of 'Toto'. By this time I was 5 years old, my coat and, as my coat had darkened, it contrasted well with the ice. Also, I looked like the  'Toto' in the film.

Over the next three weeks I had to learn to walk on ice. I did not like it and complained - in much the same way as I did when I was a pup learning to walk on the lead! As the ice was cold to walk on, I quickly learned to escape through one of the exits. But Jane always caught me and put me back on the ice. I finally decided I just had to do it. Then Jane gave me treats as rewards and many people made a big fuss of me. Apparently I had passed the audition. 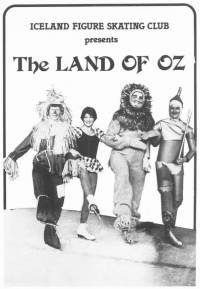 During the performance I had to run around the skating rink.  I was placed in a basket attached to a push bike ridden by the 'Wicked Witch'. As she rode around the rink, I had to jump out of the basket and find Robyn Burley who was playing the part of Dorothy. Robyn always had some cabana for me. Then she would then pick me up and skate around the rink with me under her arm. Robyn was also an Australian Champion. But being a lady, I guess Mr Judge did not have to feel her unmentionables! 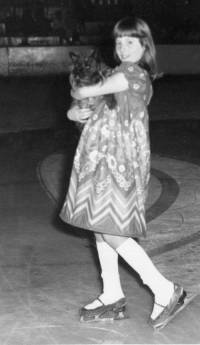 Then I had to sit in the centre of the ice rink while everybody skated around me to the music. The audience was amazed I sat there for so long. But what the audience did not know was that there was a hot water bottle concealed in my basket. Also Jane had taught me to 'stay'. I did not mind because I knew that I could see everything that was going from my warm vantage point.

We did eleven performances of the 'Wizard of Oz'. I never made a mistake. Everyone was very pleased with me that at the end of each performance I got far more applause than any of the other performers, much to Robyn's disgust! After each Show, I went to the party where they fed me with lots of goodies like sausage rolls. How I loved all the attention, especially at the Grand Finale!

A sort time after the 'Wizard of Oz' ended, Jane took me to meet her mother Gwen and placed me on her lap saying, 'Happy Mother's Day'. Gwen cried and said I was ugly. She had had Pekingese before me, but her hands were now not strong enough to manage that coat. Although I may not be as glamorous as a Pekingese, I knew I was far more intelligent! So, I snuggled up to her and put my paw on her hand every time she stopped stroking me. I soon won her over. 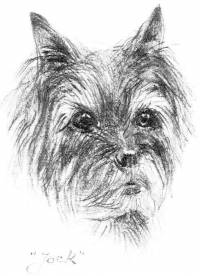 Me as sketched by Gwen

For seven years, I was her constant companion. How I loved Gwen! Her house was always warm, and with no other dogs living there, I was allowed to go anywhere I pleased. I  especially loved the couch where we spent many hours. Gwen  even had a little doggie door so I could go from the kitchen to the garden whenever I needed to.Gwen was too old to drive a car. But we did go for walks together. I had to walk sedately because Gwen had to balance herself with a stick. So, I never pulled on the lead or barked at other dogs like I used to when I was young.

Jane came over regularly to visit us. But when she gathered up the soap and towels and went into the laundry I knew she was going to bath me, cut my nails and sometimes also trim my coat. So, I hid. It took ages for Jane and Gwen to find me. But that was good fun! After Jane had finished, Jane and her mother always made a great fuss of me.

As Gwen aged, she could not hear as well as I could. So I took it upon myself to bark to tell her when someone wanted her, either at the door or on the phone. Gwen would follow me as I barked, praising me en route! I also now had other people in my life. Without any formal training, I instinctively knew I had to tell Gwen that someone wanted her attention!

I now also had a family in my life. Gwen's flat was attached to her daughter Sue's house, with only a connecting door between. Sometimes I would go to where Sue and her family lived. As they had not owned a dog for many years I managed to win them all over, especially Sue. 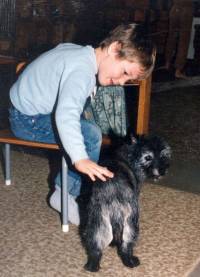 Me at the Kindergarten

Then came the worst day in my life. Gwen died. My world vanished before my eyes. Jane came over and she and Sue, who were sisters, cleared out everything from Gwen's flat!  Gwen's bed, the couch, and all those other familiar things were taken away. As I did not even have access to my doggie door any more, I lifted my leg everywhere in Sue's house to make it smell like my own! But Sue seemed to understand and installed my old doggie door in her laundry. At night I had the new experience of sleeping in a heated doggie bed!

At fifteen years of age, my new life was spent as the resident dog at a kindergarten. Sue was in charge and thought it would be a good experience for the children to have contact with a dog. So, my final role was to enjoy lots of treats and pats from tiny hands, as well as snuggling up to small children.

[1] Jane Harvey 'My Life Through the Eyes of a Cairn Terrier' KCC Gazette, published by the Kennel Control Council of Victoria May 1979, Vol 53 No 5 Page 12