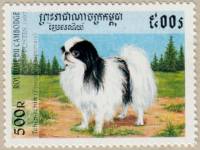 Originally called the 'Japanese Pug', this little dog is a born aristocrat who has been carefully watched over by the Imperial Palace of Japan for centuries. Today he is a small dainty Toy breed, characterized both by his unique expression which is called 'a look of astonishment', and his high stepping front action.

History of the Japanese Chin 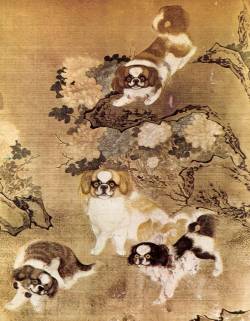 The Japanese Spaniel or 'Chin' dates back to 690 AD when communication between the Chinese and Japanese Imperial Courts began and small dogs were a common gift between the Emperors.

By the end of the next century, trade had also commenced between China and Japan. But because small dogs were only popular with the ladies of the Imperial Courts of Japan, they became quite rare[2]. By this time these dogs looked more like the wide-mouthed 'Pai' dogs described in the development of the 'Spirit Lion Dog' of China than the traditional Japanese Spitz type dogs.

By 1549, these little dogs again attracted the attention of the West when the Portuguese began trading with Japan[2a]. By 1614 Japan began trading with Britain. This continued for the next two centuries. During this time small dogs, similar to the Chinese dogs pictured on the left, were gifted to the Imperial English aristocracy[2b]. 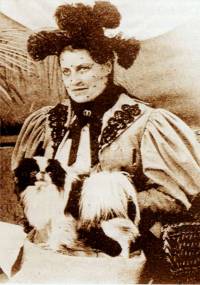 There is record of Japanese 'Pugs' being imported into England, two centuries before the Pekingese. Later, when Admiral Stirling brought more in 1854 they were still called 'Japanese Pugs'[1]. By 1860 it was written that they "were not more than nine or ten inches in length and remarkable for their snub-noses and sunken eyes, and are certainly more curious than beautiful".

Nine of these 'Japanese Pugs' were recorded as being present at a Show held in the Holborn Horse Repository in 1862, more than a decade before the First English Stud Book was published. But at that time was no means of verifying the pedigree.

The first English Champion was Mrs Addis' Ch Dai Butzu ll (pictured) bred by Mrs Loftus Allen whose husband was the master of a ship that traded with the Orient[4].

History of the Japanese Chins in Australia 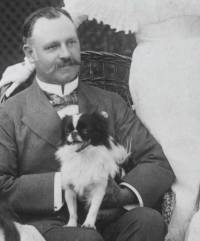 In Australia the Japanese Chin was first introduced in 1893 by Sir Malcolm Donald McEacharn who was a shipping magnate, politician and Lord Mayor of Melbourne. He is pictured here with his wife, Mary, daughters Eila and Madeleine, son Neil and their Japanese Chin Coolie Maru Keri. 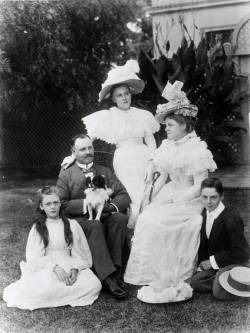 It was his business dealings with the Tokyo tramway company which helped electrify Melbourne's iconic trams, and earned him the role of consul-general for Japan. As prominent Melbourne socialites, Sir Malcolm and Lady McEacharn's dogs enjoyed public exposure so making the breed popular in Victoria prior to World War One.

After their first import of the Japanese Chin named Coolie Maru Keri, another 20 Japanese 'Spaniels' came to Australia. By 1912 yet another 10 had been exhibited and were hence listed in the Stud Book section of Tyzack's Annual[1].

Unfortunately the Japanese Chin disappeared during World War One and did not make their appearance here again until the 1960's  when some were imported firstly from New Zealand and then from Britain by Dr Dennis Maher[3]. 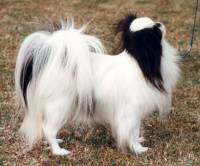 Today the Japanese Chin is a lively little dog of dainty appearance weighing ideally only 4 - 7 pounds providing type, quality and soundness are not sacrificed. His 'look of astonishment' is its most unique characteristic. 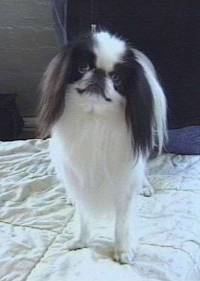 His fairly large skull is rounded in front and between the ears although never domed. His nose is large with open nostrils. It is usually black but in red and whites the colour can be appropriate to the markings. The muzzle is very short, wide, and the upper lips are well-cushioned or rounded on each side of the nostrils. The jaws and bite is level or slightly undershot. Their dark eyes are moderately large, forward facing and set far apart. A small amount of white shows in the inner corners of the eyes, giving their unique characteristic 'look of astonishment'. The small ears are V-shaped and well feathered, set wide apart high on the head and carried slightly forward.

The neck is of moderate length and the chest wide and the slender legs are straight with strong with fine bone and hare shaped feet. The body is square, short or compact but can look longer if its legs are well furnished, but never cloddy. The tail is set high on the level back, is profusely feathered and is curved over the back.

The coat may only be black and white or red and white, but must not have patches of any other colour or be tri-coloured. It is important that the texture is silky and not harsh or wiry. He moves with a stylish elevated action, lifting his front feet high with good reach but not bent like a hackney horse. Instead, the movement should be straight and true both fore and aft.