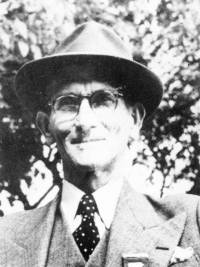 Mr Bill Brilliant was born on August 31st 1886 but his involvement in the dog world did not begin until he was 37 years old in 1923 when he purchased an Airedale bitch. As well as a huge involvement with Airedales, he was also one of Victoria's leading administrators. He joined the Committee of the the Victorian Poultry and Kennel Club in 1924 and after it ceased to be an alternative dog registration body, was President from 1948 to 1962 and continued as its Vice President until after his 100th birthday in 1986[1]. 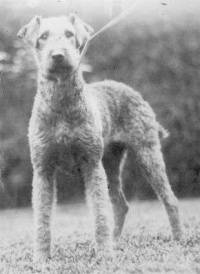 Simultaneously, a Management Committee member and later a Life Councillor (awarded for 20 years service) of the Kennel Control Council after the Royal Agricultural Society took control of registering dogs. I remember him as a well respected all-breeds judge, always showing a great interest in Airedales long after he he ceased being actively involved with breeding and showing them. 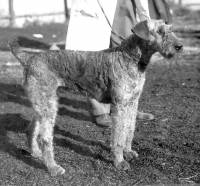 Bill Brilliant brought out a dog named ORATOR (later a Champion) who was the sire of MILLSWYN ARGO and WROSE PAM from the famous English kennel of Mr Hildabrand Wilson. WROSE PAM was described in her day as 'an outstanding bitch, chock full of quality with a grand coat and colour'. Then followed by PRINCE HILL ALPHA described as 'an outstanding, gloriously-put-together terrier' also CH FERNBACK RASCAL and RIVERINA GULLIVER. One of the Champions he produced in his early days is CH STONELEIGH SELECTED 'Biddy' (pictured).

In the 1929 English 'Our Dogs Annual', a famous judge of the time, Mr T W Hogarth said

'I think Ch STONLEIGH STORMER' was the best dog of the variety I saw in my journeyings throughout the Commonwealth. He teems with quality; tremendous foreface, unsurpassed ears and ear carriage; great neck and shoulders, plenty of substance and perfect feet, and full of character'. 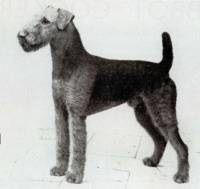 These dogs founded his very successful kennel. It was one of Bill Brilliant's dogs, CH STONELEIGH SOLARIO (pictured) who won Best Dog in Show at the 1934 Royal Melbourne Show under judge Mr Eric Dart[2]. Mr G. McEwin Duncan, who imported the first Airedales into South Australia at the turn of the Century, wrote the following about the dog in the KCC Annual 1936:

"Ch Stoneleigh Solario, an outstanding dog, going on to win best of all breeds, - a fair sized dog, with great bone and substance throughout, wonderful topline, strong quarters, nicely shaped neck, let in to good shoulders; legs and feet correct; a strong head without coarseness; carries his ears well, and altogether a very fine specimen".