Fox Hunting with a Terrier

From the 1500's to the 1800's, the sport of fox hunting grew out of necessity. At this time, Britain was overrun with foxes and other vermin which attacked livestock including poultry. Additionally, dens which were dug by vermin which lived underground were a hazard for horses and larger animals which could break a leg by stepping into these holes. Over the next three centuries fox hunting would become a sport.

Fox Hunting as a Sport 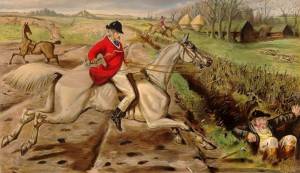 For lovers of fox-hunting, it is invariably productive of health and hilarity. Few, if any, sports can be brought into competition with it, which so completely engrosses the whole soul, and is so full of enthusiasm... fox-hunting is an eternal succession of emotive assortments - its doubts, fears, and uncertainties, its fatigues, its difficulties, and its dangers, rendering it incessantly interesting above all other sports. The bugle-horn seems to have made its way into general use with the hounds... it singularity constitutes an essential part of an huntsman's halloo and is preferred, because hounds fly more readily and impatiently to the horn, than to the voice of the huntsman.[1] 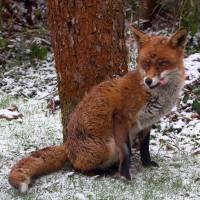 The fox is a remarkably playful animal that lives near urbanisation. The fox of England is usually tawny red, mixed with an ash colour, although this varies from country to country. It has a bushy tail which he wraps around itself, especially when sleeping in cold weather. He is a menace to farmers, stealing chickens and will attack other livestock. Foxes breed annually, usually in the spring. If the female's den is discovered, it will carry the pups off one by one to a different retreat. Foxes mature at about 18 months and live for 13 - 14 years[2]. 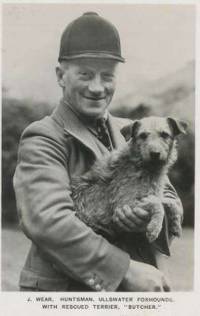 Fox Hunting was a sport in which terriers played an integral part. Accompanied by men on horseback with packs of hounds. The terrier whose flexible body historically was longer than it is high, allowed it turn easily when in a fox's den. The dog would find the fox and bolt it out of its hiding place. Then the huntsmen and the hounds could continue to follow them. Contrary to popular belief, the huntsmen killed the fox more often than the dogs.

No pack of fox-hounds was complete without good black and white terriers. This was because at a distance, a red or tanned terrier could be mistaken for the fox and accidentally shot. Also, large strong terriers were certainly the best for the purpose; but useless in a small burrow because as they could not always get to the fox[1a]. 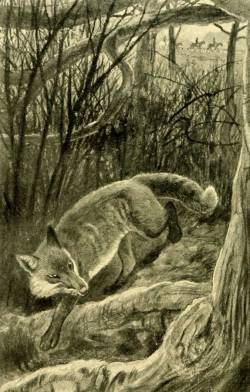 The terrier worked in one of two ways:

When following the terrier and the fox into the hole, the surest way not to lose them, was to keep below them, as near as they could. If the fox's den was large, a good terrier would trap the fox in at an angle. Then huntsmen would dig down to the terrier and the fox. The terrier would 'hold' the fox by nipping at it. This would distract it from digging further down. Care was taken to leave sufficient room so the earth was not thrown to where there may have been a chance of the pair moving again.

[1] W. Taplin  "The Sportsman's Cabinet" Printed and Published in 1804 for the proprietors, J. Cundee, Ivy Land Paternoster-Row 'The Fox-Hound' Page 268