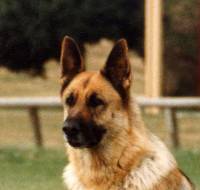 What is commonly referred to as the dog's ear consists of the lobe of leather cartilage covered on both sides by skin. The outer side is furry and the inner side is  usually smooth. The anatomical structures within the orifice inside the ear, are responsible for the dog being able to hear. But this page examines the ear lobe which varies from one breed to another in size, shape, thickness, carriage and mobility which affects the expression of each individual breed.

The ear set should be considered separately from the shape of the ear lobe itself. The ear set is the junction of where the ear lobe is attached to the skull. This can vary from a point at the top to the side of the skull. For example the pricked or erect ears of the German Shepherd Dog are set on high on the skull. They are carried upright and almost parallel on the inner edges, but never tilted inwards. They taper to a point and are set with the orifice facing the front. 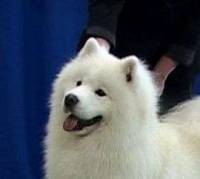 In contrast, the small, thick textured pricked or erect ears of the Samoyed are rounded at the tips and set on well apart on the skull. The thickness of the cartilage of the ear and the dense hair that covers them, protect them from the cold. 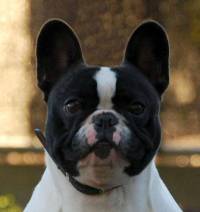 The most extreme example of pricked or erect ears that are set on high but are even more rounded at the tips is the French Bulldog. These are so rounded they are commonly known as as 'Bat Ears' because they are shaped like an old style cricket bat.

Sometimes also called semi-prick, this refers to an erect ear, with a 'set on' high on the head like ear of the German Shepherd Dog, but with some of the top part of the ear tipping forward. Some Breed Standards like the Collie (Smooth) and (Rough) are quite precise about how much of the ear can tip forward, but others like the Border Collie are not specific at all! In the case of young puppies of some breeds, potentially erect ears can be semi-erect until the teething process is complete. 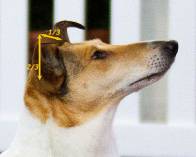 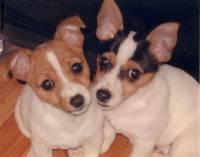 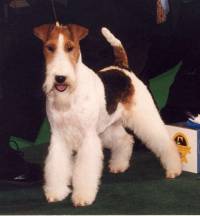 Button ears also are 'set on' high like the erect or semi-erect ear, but most of the ear lobe is folded forward. This causes the ear to sit well above the level of the skull, with the tips  pointing towards the eyes. The leather of the ear then covers the orifice, protecting the ear canal from the earth flying from the tunnels when the dog is digging.

Rose shaped ears have small, relatively thin leathers which fold backwards so you can see the inside or burr of the ear. These ears are called 'rose' because they resemble the petal of the rose. 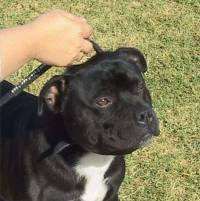 The Staffordshire Bull Terrier's and Bulldog's rose-shaped ears are set on high at the back of the skull. Historically this type of ear protected the leather of the ear from damage by dog's opponent when they were involved in a dog fight. Today, their rose shaped ears complemented by their round shaped eyes, adds to the their soft expression. 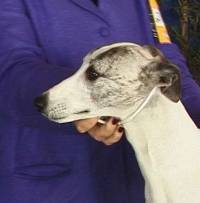 The Whippet and other Sight Hounds were bred to run at high speed in a double suspension gallop. So their ears are set on low, so when the dog is galloping, they 'streamline' the dog. 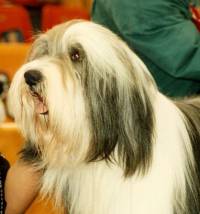 Dropped, pendulous or pendant ears are the opposite of erect ears and hang straight down from the head. There can be a small amount of lift at the back of the ear, but if they are required to be set on low, they should never fold above the level of the skull. 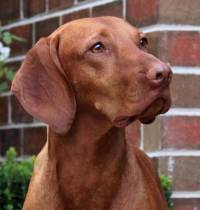 However, some breeds like Utility Gundogs have lobular shaped dropped ears which are set on high'. Examples of these are the German Shorthaired Pointer, the Hungarian Vizsla and the Weimaraner.