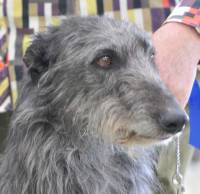 So many stories of fact and fable surround the history of these two related Gazehounds or Sight Hounds, the accuracy of their exact background has become lost in the mists of time. For these breeds are as old as the first civilizations of Scotland and Ireland respectively. It is fair to say the British Isles would not have become established in the first instance had it not been for the assistance of these magnificent, majestic hunting dogs.

History of the Irish Wolfhound and the Deerhound 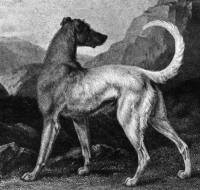 When the Celts first arrived in Britain decades before Christ was born, it was overrun with wild deer and wolves. So large hunting dogs were required to hunt prey from which they derived their respective names.  Although they may look somewhat alike, the Deerhound required speed, power and endurance to pull down a deer for the hunter to kill; whereby the more heavily built Irish Wolfhound was required to kill wolves. 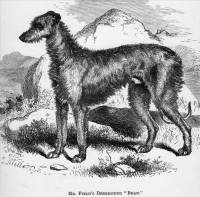 Following the birth of Christ, the Vikings who invaded both Scotland and Ireland, presumably interbred the two strains both for sport and for gifts to various kings. During the next two millennia, Britain became much more populated and wars were fought. Never-the-less, hunting expeditions firstly in virgin country and then on large estates, remained a popular pastime. So the large hound with its rough coat became legendary in both Scotland and Ireland.

' I am disposed to affirm that the old Irish Wolfhound and the Highland Deerhound are not only intimately allied in form and nature, but they are two strains of an identical breed, altered only in size and environment"[4] 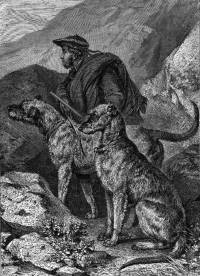 As the centuries rolled by hunting with dogs on large estates was no longer in vogue. So these giant hounds outlived their usefulness. But by the late 1800's the pure breed dog scene began taking centre stage. Enthusiasts of both breeds resurrected the lines they believed remained pure and so we have the (Scottish) Deerhound and Irish Wolfhound we know today.

History of Deerhounds and Irish Wolfhounds in Australia 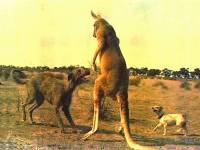 Deerhound in Australia Large hunting dogs have been present in Australia since the earliest settlements. They were used in conjunction with Greyhounds to rid settlers' properties of our indigenous quarry, the kangaroo and dingo. As there were no formal registration systems in Australia until the 1880's, whether these 'hunting dogs' were 'Deerhounds' or Irish Wolfhounds is unclear. At that time, crosses between these 'hunting dogs' and Greyhounds regularly occurred to make up an unrecognised breed, the Kangaroo Dog[5]. 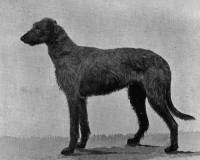 The first 3 pure breed Deerhounds were exhibited at the first VP&KC Show in 1881, with another 10 being imported by 1898, including Newton Spey (pictured). During the next decade, another 16 registered Deerhounds were bred here[1].

An Irish Wolfhound named 'Jasper' owned by Mr J H Clough of Collins Street West was entered in the first exhibition of 'Sporting and Other Dogs' held at the Exhibition Buildings, Melbourne on April 7 - 8 1864[3]. But the first documented arrival of a pure breed Irish Wolfhound was not until 1928. It was recorded that importer was so worried about crosses that no bitches were sold! So it was not until the 1970's when registered imports arrived that the Irish Wolfhound became established in Australia as a pure breed[2].

Comparison between the Deerhound and Irish Wolfhound

These breeds have a common background, are similarly coloured and resemble large rough coated greyhounds. But as the Irish Wolfhound is more substantially built than the elegant Deerhound, an in-depth comparison of these two breeds is presented below.

[3] Catalogue of the First Exhibition of Sporting & Other Dogs, Thursday & Friday April 7 & 8, 1864 promoted by the Council of the Acclimatisation Society, printed in Melbourne by Mason & Firth, Printers, Flinders Lane West Page 15

[5] W. Beilby 'The Dog in Australasia' published George Robertson & Company in 1897 Chapter on 'The Deerhound' Page 126