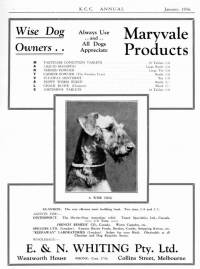 Maryvale AdvertisementNeville and Mollie Whiting commenced their success with the very successful bitch CH MARYVALE TIP TOP daughter of AERIAL ACTION bought from Len Latchford of Aeriel Kennels. In those days, dogs did not necessarily bear the kennel prefix of their breeders and, from the information I have to hand this could well have been the case with TIP TOP. 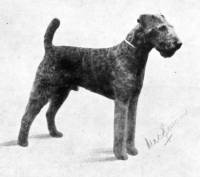 Neville Whiting imported KIERBY MERMAID and CH RENOWN MARQUIS in 1927 the basket of puppies (below) being from him and Maryvale Miss Muffett.

Then ARDROSS A LA MODE came in 1929. She was was apparently a beautiful bitch, with the following reference made to her:

'Had she been a couple of sizes larger she probably would have never got to Australia'.

Then Mr Whiting used CH ARDROSS AUTOCRAT  (IMP UK) about this time specifically to improve coats and produced CH MARYVALE MIKADO. This is a picture of him taken at 9 months, given some ring training by Mrs Mollie Whiting.

In 1930 came CH WOLSTANTON LUCKY STRIKE. Many breeders commenced with Maryvale Airedales, including Mr Thompson who looked after Rhodesia Kennels when Snowy Rhodes was away at World War Two.

The Maryvale kennels were situated in what is today a densely populated suburb of Melbourne. With modern day restrictions about kennels having to be so far from other properties, it is difficult to imagine these times when kennels were built so close to neighbours.

Neville Whiting was a great influence on the formation of the Airedale Terrier Club of Victoria and donated the perpetual trophies of the Renown Marquis tray, the F M Mitchell Cup and the Eileen O'Connor Shield, all of which were competed for for many decades. He and Mollie also Neville and Mollie Whiting also ran a business selling dog products. As he was a veterinary surgeon, he obviously traded on his professional expertise. The thumbnail above is an advertisement for his products with his lovely bitch Ch MARYVALE SOUBRETTE as centerpiece.