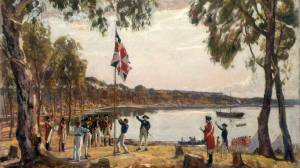 Prior to British settlement, Australia was inhabited by Aboriginal people. Their only dog was the Dingo which had also been in Australia for 10,000-18,000 years. However, on January 26th 1788, the British First Fleet consisting of eleven ships, arrived in Sydney Cove, New South Wales. This changed Australia forever. Ignorant of how different the terrain and climate was to that of Britain, this outlines their first couple of decades and explains how the first Australian industries emerged. 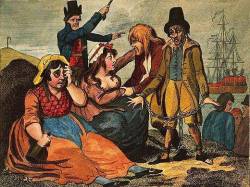 Under English law, convicted criminals and other undesirables were transported on these warships to a penal colony as an alternative to sentencing them to death. With more and more prisoners jailed for petty theft, the sentence of transportation was increasingly applied. Consequently England transported convicts to its colonies such as America. Between 1775 and 1783 when America's War of Independence was fought, Britain's 13 North American colonies threw off British rule to establish the sovereign United States of America (USA). From 1776 when the Declaration of Independence was signed, the newly formed USA refused to accept further shipments of British convicts.

Consequently, between 1788 and 1868, the British government transported approximately 165,000 convicts to its new colony, Australia. For example, in 1788 the First Fleet brought out more than 700 convicts. The Second Fleet in 1790 brought out another 928 more  convicts 26% of whom died on board and 40% were dead within 8 months, mainly through starvation. But the convicts kept coming for the next 80 years! The convicts who survived, struggled to find sufficient food to keep themselves alive. With complete disregard to our Aboriginal people  who, for tens of thousands of year had learned how to live off the land, at first the British attempted to use their farming methods in Australia. Meanwhile this is a description of how one of the female convicts survived:

Our kingaroo rats are like mutton, but much leaner; and there is a kind of chickweed so much in taste like our spinach that no difference can be discerned[1a]. 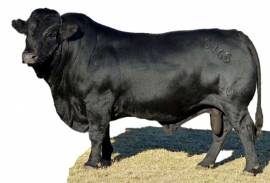 When the First Fleet sailed around the Cape of Good Hope of South Africa, the crew picked up supplies which included four cows and two bulls of native Drakensbereger black cattle. When the Fleet arrived in Sydney Cove, the cattle were yarded each night. In the absence of any Livestock Guardian Dogs to prevent them straying, a convict was made herdsman and given strict instructions not to let the cattle out of his sight.

However, 5 months later in June 1788, the cattle escaped. Numerous parties were sent out to try and recover them. After a three-weeks fruitless search, Governor Phillip gave up looking. He incorrectly concluded the cattle had been speared by the Aboriginal people, or strayed too far into the interior of this unforgiving land to warrant further investigation. Consequently, the starving community at Sydney Cove regarded bringing the cattle to Australia as an "absolute disaster". 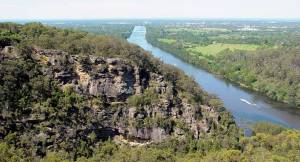 However, seven years later in October 1795, two convicts on a hunting expedition heard rumours from the Aboriginal people that cattle existed across the Nepean River. The new British settlers obviously underestimated the survival instincts of wild cattle! After travelling for two days across the river in a southerly direction, to the convicts' surprise and satisfaction they found a herd of over 40 cattle grazing. Further investigation revealed several herds of cattle totalling over 100 head that had crossed the Nepean River presumably when the river levels were low.

Five years previously, there had been a bad report about that part of the country when it as in drought, which would have made the river levels drop. Typical of Australian weather, long periods of drought are usually followed by huge amount of rain. Of course this transforms the whole countryside. That is why, in October 1795 the land was described land as 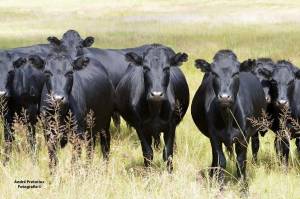 ".. country remarkably pleasant to the eye, and the finest yet discovered in New South Wales, the soil good and eligible for cultivation, everywhere thick luxuriant grass.. "[2].

Consequently, what at first appeared to be a terrible disaster, turned into perhaps the most important event of the early years of white settlement in New South Wales. It also gave an insight into the capabilities of selected areas of Australia to carry vast herds of livestock. By around 1812, pure breed Drakensberger Black Cattle had completely disappeared. However the land they 'discovered' was taken over by Captain John Macarthur and his wool industry.

Since the Bronze age 4,000 years ago, fossil remains prove that Basque people lived in Europe on both sides of what is now the French-Spanish Border. Famous for shepherding, these people selectively bred Merino sheep which became famous for their fine fleeced wool. 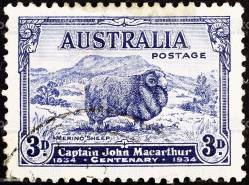 In the centuries before the Suez Canal was built, ships from Spain and Portugal sailed around the Cape of Good Hope in South Africa to trade with Asia and the Middle East. Hence South Africans had their wool industry already established by the time the British used this route to sail to Sydney Cove. Consequently, in 1789 when Captain Henry Waterhouse and Lieutenant William Kent sailed around the Cape en route to Australia, they picked up the first Merino sheep to be brought into the Colony of NSW. 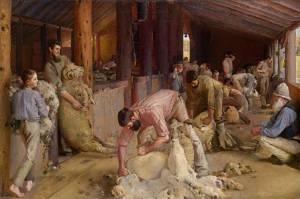 Meanwhile, Captain John Macarthur had grabbed 200 acres of land at Parramatta which he cleared using convict labour. While resident there, he purchased his first Merino sheep from Captain Henry Waterhouse and Lieutenant William Kent with the intention of producing fine fleeced wool. Politically this was an opportune time to attract the attention of the British elite to the potential of the new colony. The Napoleonic Wars had stifled the British economy by closing Britain off to European merchandise. Consequently, the expanding British Empire was desperately short of land suitable for grazing livestock.

To this end, in 1801 when Macarthur visited England taking examples of the wool shorn from these sheep, he pointed out that wool was non-perishable, hard to damage and travelled well. Consequently, John Macarthur's visit to his Majesty King George 3rd in 1801 was rewarded with the King's gift of more Merino sheep and his own ship, 'the Argo'. Then the influential politician Lord Camden, assisted John Macarthur's 1805 grab of a further 10,000 acres (4,046 hectares) in the area that the black cattle had 'discovered'[3]. 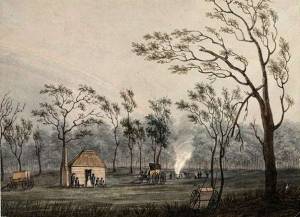 However, it was John Macarthur's wife, Elizabeth together with their two sons, James and William who established 'Camden Park'. Then Elizabeth's nephew, Hannibal joined them to manage the merino flock and the wool production. In 1807 they sent the first bale of Australian wool back to England for sale.

Camden Park was then turned into a property which, by 1820, housed some 5,000 Merino sheep. Not only did cross-bred Merinos fed the growing population, the fine wool industry made Australia one of the richest countries in the world.