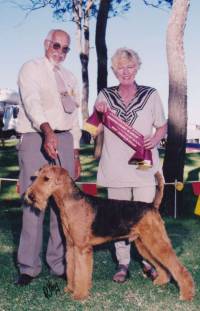 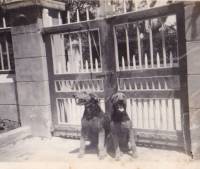 Robert Grannum was born and raised on the tiny island of Barbados in the Caribbean. Robert well remembers growing up with an Airedale 'Tibi' his parents bred and also "Matilda' who was bred in Venezuela. After Robert settled in Brisbane in 1974 and decided to breed Airedales, his registered the kennel prefix 'Bajan' which means someone who comes from Barbados. 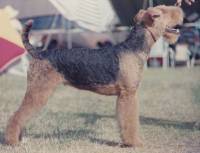 Robert's interest in breeding, exhibiting and judging pedigreed animals that commenced in Australia with Persian cats, with around 10 champions to his credit. In researching Airedales, in 1986 he was recommended to contact us for his foundation bitch after speaking to a prominent Schnauzer breeder and exhibitor who had moved up to Brisbane from Victoria. That foundation bitch was Ch. Rangeaire Rehearsal 'Penelope' or 'Penny' for short. 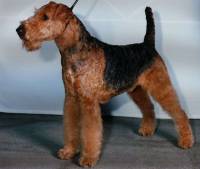 'Penny' obtained her title Australian Champion with relative ease. A Group winner with another dozen in-group awards, she won 34 Challenge Certificates totaling some 251 points. Mated to Ch Burfield Apollo She produced the only Airedale to gain Australian Obedience Champion (a title no longer available), the first two Bajan bred show Champions as well as a significant breeding bitch. These were 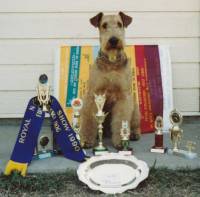 'Brady' (pictured) was owned and trained by the very talented Liz Wozencroft. He deserves special mention here as he is as far as I am aware, the highest qualified Obedience titled dog in the history of Airedales in Australia.

At first Brady was reluctantly shown. But when he took part in an Obedience Demonstration at the Brisbane Royal, Liz realized her first love was Obedience and entered him in a local competition. When he was unsuccessful, Liz entered him for another competition some three and a half hour's drive away. But when her husband objected saying

'You're mad taking an Airedale all that way... they're no good at obedience[1]'

... with a point to prove, Brady began being seriously trained. As both Liz and her dog enjoyed these sessions more and more, training became their daily routine. 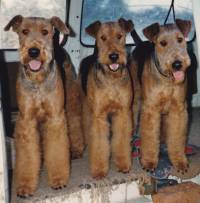 Brady won equal first place at that competition so far from home, with lots of people commenting how well and happily he worked. Just three months later he qualified for his first Obedience title, Companion Dog. Five months after that he gained the title of Companion Dog Excellent, winning the Open Dog Obedience Class at the Brisbane Royal.  He then gained his third Obedience title, Utility Dog.

Training him for tracking was the next challenge. But he happily tracked Robert his breeder, dragging Liz through the mud to find him hiding behind a tree! Brady not only gained his Tracking title, he also passed his Tracking Dog Excellent title. The combination of these 5 titles, made Brady an Australian Obedience Champion. 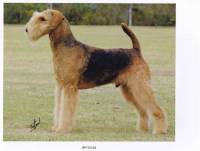 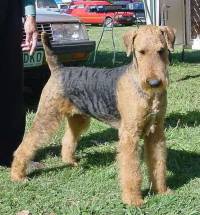 A complete outcross to the lines Bajan had previously been using, Billy was a useful stud dog. He produced 6 Champions 5 from bitches sired by Ch Bajan Al Capone and the 6th from an Al Capone grand daughter. These were 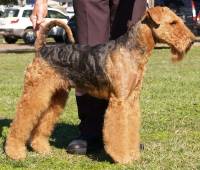 'Jay Jay' is Bajan's biggest success story as far as the show ring is concerned and should be able to make the title of 'Grand Champion'. He already has 78 Challenge Certificates including Best of Breed at the Brisbane Royal three times and over 600 Challenge points to his credit. A Best Exhibit in Group winner, 'Jay Jay ' has also had some 20 other Group placements, including 4th Best Puppy in Show at the Great Joint Terrier Show of NSW under an Italian judge and Best Junior in Show at the Sporting Terrier Club of Queensland under yours truly! Unfortunately 'Jay Jay' has not been bred with extensively as most Bajan bitches are such close relatives. 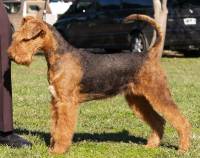 At the time of writing Jay Jay has produced one Champion mated to Ch Bajan Tangmer Champayne a granddaughter of Ch Southdale Figjam. This Champion is Ch Bajan No More Champagne. However, Jay Jay also has some young stock already pointed. 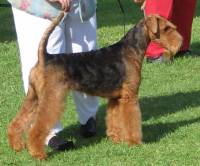 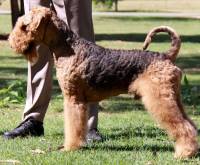 Grace produced 4 Champions - one to Ch Southdale Figjam, one to Ch Bajan Peer Gynt (above) and 2 to Grand Ch Fyreayre Robberyundarms. These latter 2 were the very successful litter and sister and brother (pictured) Ch Bajan Golda Meir and Ch Bajan Grigori Pasputin.