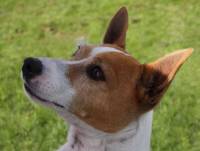 This section considers the overall shape or outline of a dog's head. Some of these variations are quite distinctive whilst others are quite subtle, each having been developed to perform a particular function. Understanding these different shapes and outlines and their variations are vital to recognizing breed type of each pure breed of dog. 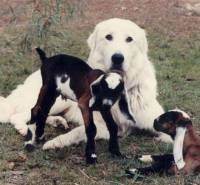 Firstly lets consider two heads where the entire head is taken into account. The two of most commonly recognized shapes are 'wedge shaped' and 'cone' or 'conical shaped'. These terms describe the head as a whole, rather than any particular parts. Whether the head is viewed from the top, from the front or in profile, this shape remains constant - that of a blunt cone or a blunt wedge.

The subtle difference between these two shapes is the roundness of the cone compared with that of the wedge which is easily seen at the back of these two heads. This more rounded shape throughout the head of the Maremma Sheepdog can be likened to that of an ice cream cone, but the flatness of the skull of the Tenterfield Terrier between the ears makes it more angular or shaped more like a rectangular wedge. 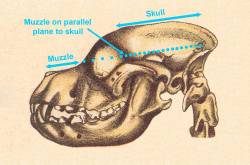 Head planes are best understood when the head is viewed in profile.

The most common term referred to in Breed Standards is parallel head planes. This is diagrammatically illustrated here by two separate blue lines: 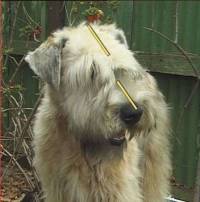 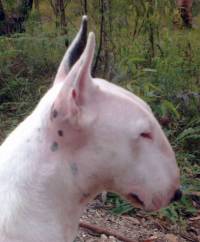 Here are two extreme examples of breeds whose skulls are relatively flat, but whose head planes differ dramatically:

The Bull Terrier has diverging head planes, so it is egg-shaped and completely filled with no hollows or indentations. Its Breed Standard requires the whole head to curve gently downwards from the top of the skull to the tip of the nose, giving the dog a down-faced appearance. Historically this head shape was developed in the belief that it gave the dog stronger jaws for fighting.

In contrast the Pointer has converging head planes. This chiselling of the foreface can cause the muzzle to curve gently upwards or be somewhat concave ending on a level with the nostrils, giving the dog a slightly dish-faced appearance. Historically this head shape was developed in the belief that it made it easier for the dog to detect air borne scent when hunting. 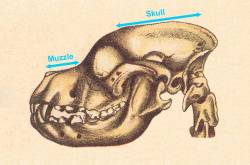 As many breed standards state skull to muzzle ratios, it is important to understand the exact areas of the head to which these measurements refer.

The term skull refers to the topline of the brain case only.

When accessing the skull measurement do not include the stop, the eyes nor the area of the occiput. 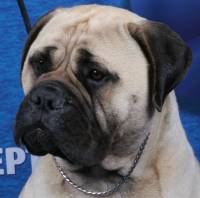 To illustrate the brachycephalic head, we have chosen to compare the proportions of the head of the Australian Terrier and the Deerhound to the head of a Bullmastiff.  The latter has a Breed Standard clearly states the exact measurements of the wide skull, which is two units long as well as wide, to the muzzle's one unit.

It is particularly important to appreciate that when a face is shortened, not only the nostrils but also the air passages they lead to, may also become reduced in size. If the openings of the nostrils are reduced, chances are the passages behind them may also be reduced. This can cause the dog to snore or even gasp for air, especially on a hot day or after exertion.

As there are so many variations in head proportions of various breeds of dogs, it is important to understand the correct balance of the head which is typical of each particular breed. The following definitions are of heads which are not Brachycephalic. 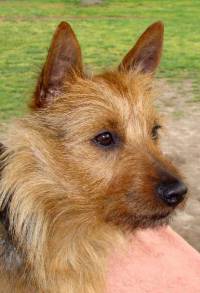 Mesoticephalic is the technical term for breeds like the Australian Terrier which has a medium width of skull and equal proportions of length of skull to muzzle length.

At the opposite end of the scale to brachycephalic, we have dolichocephic which is the technical term for a breeds like the Deerhound which has a narrow skull coupled with a head of great length.