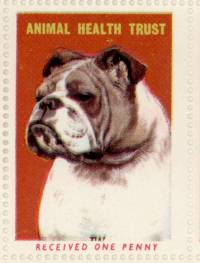 As the Bulldog was among the first British recognised pure breeds[3] , he is one of our most important. Britain's national dog, his somewhat exaggerated features are a product of the purpose for which this dog was originally created. For although this purpose was outlawed around two centuries ago, the Bulldog's external features combined with his outstanding temperament have become a symbol of British pluck and endurance.

History of the Bulldog 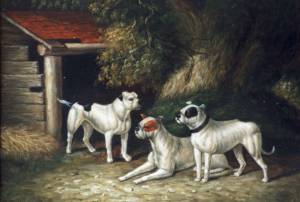 The British Bulldog was descended directly from the 'broad mouthed dog of Britain' or 'Pugnaces' described by Julius Caesar in 54 BC. He was later depicted in 'The Master of the Game' (1406 to 1413) as a dog with a short snout dog used to hang onto fierce bullocks so they could be slaughtered by the butcher. Writers of sport around 1400 AD called this dog the 'Alaunt' and also 'the Butchers Dog'. Classified as a type of Mastiff by Dr. Caius in 1570, the Bulldog was listed in the First English Stud Book (1859 - 1874) as among our earliest pure breeds.

The British Bulldog was that small type of Mastiff developed for use in the sport of bull baiting which was born in England in 1209 AD. The story goes that when Lord Warren, then the Lord of Stamford witnessed a pack of dogs tormenting a bull, he was impressed by their athleticism and courage. So the next year, he leased part of his land for local butchers to supply a bull to be baited by trained dogs. When this became an annual event, the sport of bull baiting was born! It received Royal patronage and for several centuries combats between bulls and dogs became popular as entertainment. It was even believed that the flesh of a bull that had exerted itself by being baited before it was slaughtered by the butcher, was more succulent[1]. This practice became so universally accepted at this time that in various boroughs butchers, who sold beef from animals that had not been baited before slaughter, were subject to considerable penalties[2] !

To bait a bull, the dog was expected to pin the bull to the ground by its nose and not lose its grip until the bull was slaughtered. As the dog had to crawl along the ground on its belly in order to get a grip on the bull's nose, a small lower-slung type of dog became popular[1]. By 1570, Dr.Caius had classified the small Mastiff that did this job efficiently as the Butcher's Dog.[6] 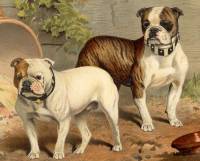 The historical purpose of bull baiting was outlawed in 1835. By 1875 his regular appearance at dog shows had captured the interest of the press. The 'New Bulldog Club' was formed as a means of encouraging all breeders to take part in drawing up a scale of points on which a Breed Standard could be based. So the exaggerated features that make up the modern British Bulldog's unique thuggish appearance became a symbol of British grit. 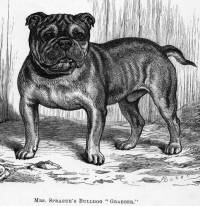 For this reason, the British Bulldog is considered to be Britain's National Dog

"... for no variety of canine species is so universally identified, both at home and abroad, with Great Britain as the subject of this present article. Bulldog pluck and endurance are qualifications eagerly cherished by Englishmen of all classes; and it would be manifestly unjust to deprive this dog (breed) of the title which has been so universally awarded him"[3]. 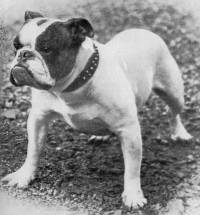 It would be equally unjust to fail to recognise his outstanding qualities as a loving companion as well as the unique physical features that have been preserved for almost 200 years by the Breed Standard and the advent of dog shows.

History of Bulldogs in Australia 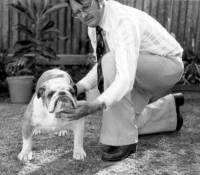 In Australia, 17 British Bulldogs were listed in the catalogue of the First Exhibition of Sporting and Other Dogs held at the Melbourne Exhibition Buildings in April 1864[4]. Another 3 were listed as having been imported before 1890 with an additional 45 by 1912. The Victorian Bulldog Club was founded in 1907 and was affiliated with the Victorian Poultry and Kennel Club holding an Annual Show and Parade. By 1912 some 159 Bulldogs were listed in Tyzack's Annual[5] demonstrating the immense popularity of Bulldogs in Australia from the earliest times of dog showing. Of particular note is Mr Wes Stacey who piloted Bulldogs in Australia for over 60 years. We feel privileged to have enjoyed his personal input into this page. 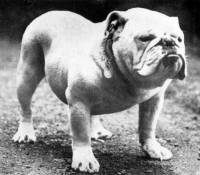 Like any other pure breed, the modern Bulldog's physical characteristics make him instantly recognizable. But although the purpose for which he was bred has been outlawed since 1835, a century later his physical characteristics were recognized by the icon of his time, Ch Pugalist (pictured). It is important that modern society understands the historical use of for each and every feature preserved by enthusiasts that make up our modern Bulldog. So these features, together with their historical purpose, are tabulated below. 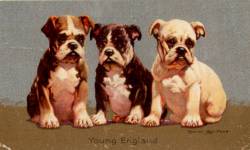 The British Bulldog is a smooth coated, thickset dog rather low in stature, but broad, powerful and compact. He should convey an impression of determination, strength and activity. He comes in any whole colour or smut (a whole colour with a black mask) or pied that is any whole colour with white. However dudley (pink), black or black and tan are undesirable. Although no actual height is given, his height should be consistent with a desirable weight of 25 kg (55 pounds) for a dog and 22.7 kg (50 pounds) for a bitch.

In the chart of the Bulldog below, each part of the dog's historical purpose is explained.

[4] Catalogue of the First Exhibition of Sporting & Other Dogs, Thursday & Friday April 7 & 8, 1864 promoted by the Council of the Acclimatisation Society, printed in Melbourne by Mason & Firth, Printers, Flinders Lane West Page 12 - 13

[6] Dr John Caius, "Of Englishe Dogges: The Diuersities, the Names, the Natures, and the Properties", London, 1576, translated into English by Abraham Fleming, Page 31. The work was originally published in Latin in 1570 as "Johannes Caius, De Canibus Britannicis".