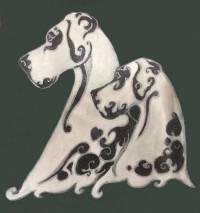 The Great Dane originated in Denmark, was named by a Frenchman, was used by the Germans for boar hunting, but was developed into the pure breed we know today by the British aristocracy. Such are the many facets of the Great Dane! With neither the lightness of a Greyhound nor the heaviness of a Mastiff, this majestic dog has a look of nobility which combines the beauty of an elegant outline with fluidity of movement. Despite his size, he is a gentle family pet.

History of the Great Dane 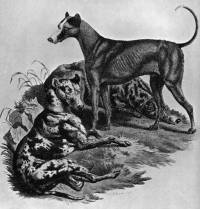 From 793 - 1066 AD, the Vikings of Denmark covered most of Europe. These people used a large Mastiff type of dog to hunt boar. In these early settlements a small farm dog also existed which is now known as the Danish-Swedish Farm Dog (FCI 356). To separate it from the smaller dog, the large dog that hunted boar became known as the Great Dane. Later, during the 16th, 17th and 18th centuries when a faster dog was required to hunt boar, this larger dog, the Great Dane, became lighter in build than his predecessors.

This type of dog spread into the area that is now Germany. There, this large German Boarhound also became known as the German Mastiff. The name Mastiff was a common name historically given to all large hunting dogs that were also used as fighting dogs throughout Germany, Denmark and France. 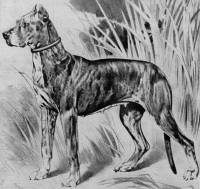 When a unified German Empire was created in 1870, the Germans needed a 'National dog' that looked noble and more like a thoroughbred. So they claimed the Great Dane as their own, calling him the 'Deutche Dogge'[1]. In 1878 a Committee was formed in Berlin to make the "Deutsche Doggen" a separate German breed with the Breed Standard being adopted in Germany (now FCI 235). From 1888, this breed standard is the responsibility of the German Doggen Club, which frequently revises it. This has effectively split the Deutche Dogge and the Great Dane into two separate pure breeds.

The Great Dane in Britain 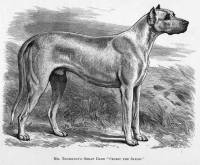 He first came to Britain around 1860. 'Stonehenge', an early writer of that time, described him as:

'Enormous in size, sensitive in nose, of great speed, unyielding in tenacity and courage, and full of intelligence, there is no dog that can so well sustain the part of the dog as a hunter of large game, the guardian of the camp, the keeper's night dog, the companion of long and lonely journeys on horse or foot; and when judiciously used as a cross the result for some of the purposes named is even more useful'[8]. 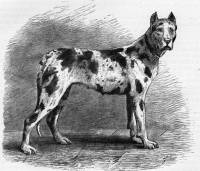 In Britain the Harlequin, (pictured) drawn in the 1870's was described as having

'admirable likeness to the Tiger German Mastiff known 50 years ago..   with a ground colour of white or silver grey with very irregular specks, as distinguished from the Dalmatian which has its spots quite regular'[2].

A written description from 1800 was that

'... his bold muscular action as he trots or gallops in fine style before the carriage added greatly to the pomp of the noble and wealthy. It was meet (essential*) for the Great Dane to accompany the highest, most exalted and important in the realm (kingdom*), whilst the coach dog or Dalmatian went with the carriages of less important, a humble attendant of the servants and horses. I certainly think no equipage (gear*) can have arrived at its acme (highest point*) of its grandeur until a couple of Great Danes precede the pomp'[3].(Note * denotes a more modern interpretation of a word) 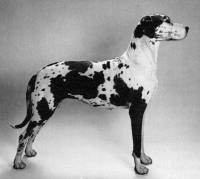 In Britain this large European boar-hunting dog became known as the 'Great Dane'. This name was an English translation from the French 'Grand Danois' described in Buffon's famous work first published in 1755. As such he was first exhibited in the 'Foreign breeds' section at the first British dog shows. But in 1895, the first specialist Great Dane Club had two major arguments with the Kennel Club (UK). The first was when a Law was passed to ban ear cropping and the second was the Kennel Club's decision to place the Great Dane in the Non-Sporting Group. These disputes caused the dissolution of the founding Great Dane Club[4]. 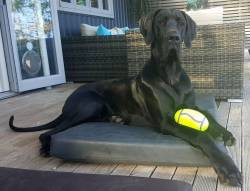 In 1896 Robert Leadbetter M.F.H formed another Club which flourished. By 1903 a third Club was formed which took the Great Dane to great heights. The first Breed Standard was written with the minimum height and weight being the same as it is today. But the only permissible colours were blue, black, brindle, fawn and harlequin[1].

The History of Great Danes in Australia 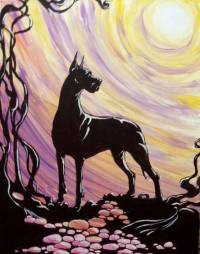 When dog shows began in Melbourne 1864, 4 'Danish Dogs' were entered[6]. The first attempt to co-ordinate formal pedigrees was Tyzacks Annual published in 1912. Here 10 Great Danes are listed as being imported here between 1890 and 1906, one whelping a litter of 9 in quarantine. A further 13 were listed in the Stud Book Section[5]. Interestingly, in Tyzacks Annual they were named Great Danes (German Boarhounds). From the first formal classifications, Australia followed the English Kennel Club placing the Great Dane the Non-Sporting Group[1]. But unlike Britain, here he has remained ever since! 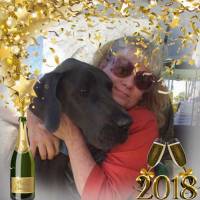 It is beyond the scope of this website to name all significant breeders and importers of Great Danes to Australia from 1864 until the present. But we would like to acknowledge Gayle Revill who not only took blue Great Danes to great heights within Australia and beyond, but also left an everlasting legacy to her breed with magnificent works of art. We are privileged that Gayle has given us permission to enrich this page by reproducing some of her paintings and cartoons for future generations to enjoy. 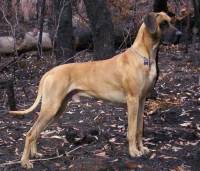 The Great Dane is a muscular, strongly built majestic dog whose elegance of outline is essential. He carries his head high and his tail in line with his back, or slightly upwards. Mature dogs should stand a minimum of 76 cms (30 ins) and the bitches 71 cms (28 ins) minimum. Mature dogs weigh a minimum of 54 kgs (120 lbs) and the bitches 46 kgs (100 lbs) minimum. He comes in fawn, brindle, blue, black and harlequin. 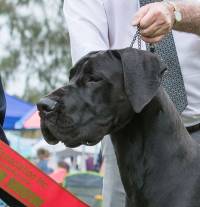 The head gives the impression of great length combined with strength of jaw. The length of head is in proportion to height of dog. Length from nose to point between eyes equal or preferably of greater length than from this point to back of occiput which should not be prominent. 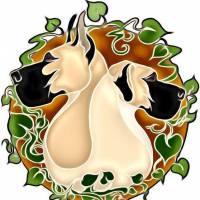 The skull is flat and proportionately narrow so that whole head when viewed from above and in front, has appearance of equal breadth throughout. The cheeks are flat but in profile, the brows cause the stop to look abrupt, with the indentation continuing to run up the centre of the skull. The muzzle is broad and well filled in below eyes. It is long and of equal depth to its length. The underline of head viewed in profile, runs almost in a straight line from corner of lip to corner of jawbone. 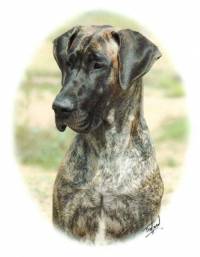 The bridge of nose is very wide, with slight ridge where cartilage joins bone (this is a characteristic of breed). The nostrils are large, wide and open, giving that blunt look to nose. The lips hang squarely in front, forming right angle with upper line of foreface. The medium sized eyes should not be round. Instead they are fairly deep set, and preferably dark. Wall, or odd eyes are only permissible in harlequins. In countries where ear cropping is banned, the medium sized ears are triangular in shape, set high on skull and folded forward. His mouth closes in a normal scissors bite. 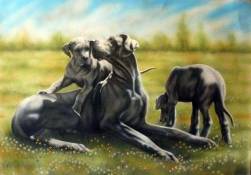 The neck should be long and well arched, without dewlap. The well laid shoulders are muscular but not loaded with the elbows well set under the body. The forelegs should be perfectly straight with big flat bone. The feet are cat-like, turning neither in nor out. The toes well arched and close, with strong dark nails in all coat colours, except harlequins, where light nails are permissible. The chest is very deep, with the ribs well sprung and the brisket reaching the elbow. The back and slightly arched loins are strong, with the underline or belly well drawn up. 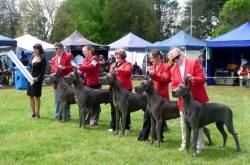 The hindquarters are extremely muscular, giving strength and galloping power. So the second thigh is long and well developed, creating a good turn of stifle. The hocks are low, turning neither in nor out. The tail is thick at the root, tapering towards end, reaching just below the hocks. When the dog is moving, it is carried in straight line level with back but curving slightly curved towards end, but never curling or carried over back. He moves with a lithe, springy but with a free, covering ground action, driving from the hocks. The short, sleek coat is dense but never inclined to roughness.

From the time the Great Dane was first recognised, he still only comes in just 5 main colours. These are 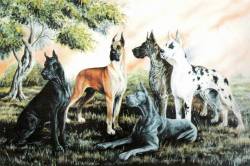 In above colours (except harlequin and black) white is only permissible on chest and feet, but it is not desirable even there. But a modern addition to these colours is the mantle or Boston colour pattern, this name derived because of its likeness to that of the Boston Terrier. These are black and white with a solid, black blanket extending over the body. Ideally they have a black skull with white muzzle with an optional white blaze. A complete white collar is preferred with a white chest, white on part or whole of the forelegs and hindlegs, and a white tipped black tail. The nose always black, and the eyes and nails are preferably dark.

[6] Catalogue of the First Exhibition of Sporting & Other Dogs, Thursday & Friday April 7 & 8, 1864 promoted by the Council of the Acclimatisation Society, printed in Melbourne by Mason & Firth, Printers, Flinders Lane West. Page 14