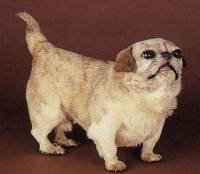 The Pug is one of the most popular breeds and quite unique in the Toy Group.This early dog pictured, a 'Chinese Happa Dog' named 'Hah-Bah', was exported from Peking in 1906 and preserved, mounted and on display at the British Museum of Natural History at Tring, UK[6].

History of the Pug 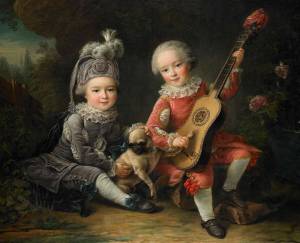 There is little doubt that Pug originated in China where it had existed for Centuries and was called the 'Lo-sze'[5].

Trade between China and the West began in earnest, firstly with Portugal in 1516, then with Spain and France in 1575. But when trade with the Dutch led to the founding of the East India Company, the Pug became known in England. 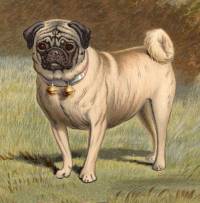 Meanwhile, Dutch born William III and his protestant wife Mary ascended the throne in 1688. As they opposed Catholic succession, members of the Royal household tied bows of orange ribbons with bells on them around the collars of their little Pugs. This expressed not only approval of their new protestant monarchs, their palace was called the "House of Orange', representing the colour of the Dutch Royal Family[7].

The Pug becomes a Pure Breed

Many early English paintings of portrayed Pugs with bells attached to their collars or orange coloured ribbons around their necks[4]. So, well before the Kennel Club began its records in 1864, and produced the First English Stud Book, the Pug had become a distinct type of dog and one of the few Toy breeds mentioned. 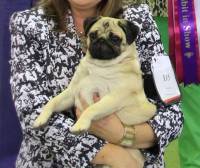 In addition to his shortness of coat, the Pug has elasticity of skin to a far greater degree than the Pekingese. This allows the Pug to be picked up by the scruff of the neck without pain[5]. But the point most sought after was the 'Prince' mark, formed by three wrinkles on the forehead with a vertical bar in imitation of the Chinese character for 'Prince'[5a]. This is the reason for the 'clearly defined thumb mark or diamond on forehead' demanded by today's Breed Standard.

History of Pugs in Australia 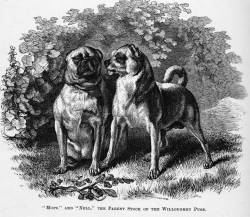 Pugs (except black) were among the earliest breeds to reach our shores. Two were entered at Melbourne's First Exhibition of Sporting and other dogs in 1864 - one being called a 'Japanese Pug'[1]. Some would have no doubt accompanied early immigrants and helped by masters of the vessels. Certainly Captain Wagstaff of 'La Hogue', a London registered migrant and cargo ship imported 'Romeo' and Juliet' for F Steven of Pitt Street. Sydney and later imported more Chinese Pugs', that were from the progeny of two of the Chinese Pugs taken from Peking in the 1860's. Another two were listed in the catalogue of a NSW Agricultural Show in 1870[2]. 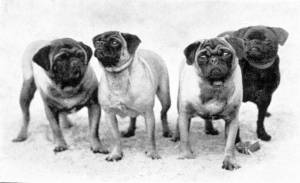 Several other imports followed across Australia so that in the first decade of the 1900's, there were several breeders with 24 individual dogs being listed in Australia's first Stud Book[3]. However, it should be noted that Pugs (Black) were not represented in Victoria as of 1911[3]. Pugs in Australia have been popular for over a century with many famous breeders having exhibited and bred them consistently. Grace Lord in NSW, Esme and Jack Stringer and Elaine and Jock McRae and their daughter Leonie in Victoria have all specialized in Pugs for over half a century leaving them one of Australia's most popular toy breeds. 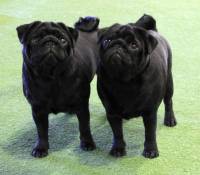 The Pug is a brachycephalic or short-faced Toy breed weighing just over 6-8 kg or 14-18 pounds. He should give the impression of the great charm and dignity of his aristocratic past. His fine, smooth, soft, short and glossy coat can be silver, apricot or fawn. If of any of these three colours, the Pug should have a clearly defined black mask and trace which is a black line extending from the occiput to the tail, making a complete contrast between the colour and the black. Unfortunately this is rarely seen in modern Pugs. Alternatively, he can be solid black. 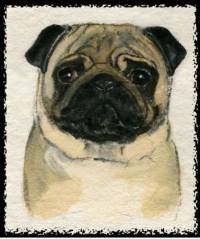 His wide muzzle is short and square with a slightly undershot mouth with the incisors preferably almost in a straight line. The Pugs' wonderful lustrous eyes are not too large, should always be dark in shape and round, but never protruding giving a soft, solicitous expression. His ears are small and thin and can be either rose-shaped or button ears. 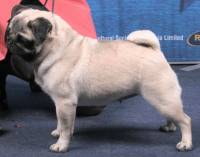 The strong neck should have a slight crest and sufficient length to carry the head proudly.  The body of the Pug is described in the Breed Standard as 'multum in parvo' which means it is decidedly square and cobby with compactness of form. The Pug's front and back legs are of moderate length and well set under the body. 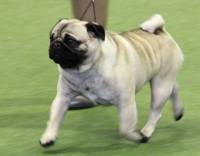 The back legs in particular are very strong with a good turn of stifle. The ribs are well sprung and carried well back giving a level topline which is neither roached nor dipping. So the tail is high set, curled tightly over hip with a double curl highly desirable. A slight but not exaggerated roll of hindquarters typifies the Pugs' gait.

[1] Catalogue of the First Exhibition of Sporting & Other Dogs, Thursday & Friday April 7 & 8, 1864 promoted by the Council of the Acclimatisation Society, printed in Melbourne by Mason & Firth, Printers, Flinders Lane West

[2] "The History of Purebred Dogs in Australia" published by OzDog Newspaper 1997 , Pug  by Jenny Jarvisto Page 250