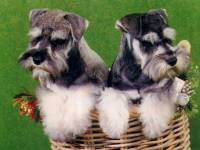 History of the Schnauzer 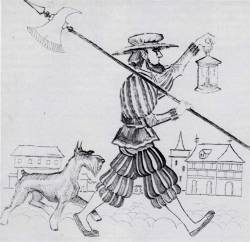 German in origin, Schnauzer history dates back to the late 1400s when it was the guard and family dog of the working class in Southern Germany. In the 1600s Schnauzers were commonly used by tradesmen to protect their wagons of merchandise as they travelled from hamlet to hamlet. These reliable, hardy dogs did not take up too much room but were sufficiently fierce to intimidate rogues and vagabonds. Schnauzer-like dogs appear in works of art of several artists of this period including a tapestry by Rembrandt and a statue in Stuttgart. By the 1700s some Schnauzers became known in England.

The name 'Schnauzer' in meaning moustache or whiskers, described the Wire-haired Pinscher that first appeared in dog literature in 1842. This name was first accepted to describe this breed when it became a pure breed.

The Schnauzer becomes a Pure Breed

The oldest German Kennel Club was founded in 1878 when the German Stud Books began. By 1880, the first Breed Standard of the Wire-haired German Pinscher, Ratter or Rat-catcher described an alert dog with a rough, hard coat. 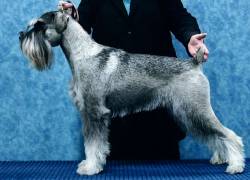 By the 1880s the status of the Schnauzer went from a farm dog to a pure breed. By 1885, the blacks were becoming known and by 1890 the occasional Schnauzer with true salt and pepper colour was produced by mating blacks to reddish-coated dogs. With the breed well established in Germany by 1914 when World War 1 began, both the Germans and the Americans began using Schnauzers for Police work. 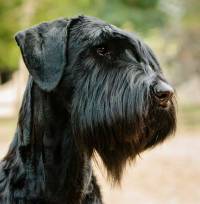 As outlined in the History of the Rottweiler, large dogs were known in Southern Germany since Roman times, and used for both for droving and carting and as herding dogs along the old trade routes. Indigenous hunting dogs like the German Boarhound and later, the Bullenbeisser were probably added to this mix. This large dog was likely to be mixed with the Schnauzer that was already known in this area, to create the Schnauzer (Giant).

History of the Schnauzer in Australia

Although a couple of Schnauzers were introduced here by Anthony Horden in 1934, interest in the breed did not continue. In 1948, after World War Two had ended, Anthea Cunningham in Victoria imported Delaborde Mampe and Rodelia Bishopsten. She followed these two up with more imports. For many years, Anthea not only bred beautiful Schnauzers under the Urangeline prefix, she was always ready to assist any person with an interest in the breed.

Also in 1948, Patrick White (a Nobel Prize winning novelist) imported Schnauzers into NSW. This is the interesting wartime story of how Patrick and his partner became so significant in introducing Schnauzers into Australia.

Patrick's lifetime partner was Manoly Lascaris, an Egyptian officer in the Greek Royal Army. In Palestine, he bought a Schnauzer pup 'Franz' from a Jewish refugee. 'Franz' became a mascot with Greek Sacred Regiment in the Middle East and went to Tobruk and back during World War Two. When Manoly's regiment moved to Europe, his partner Patrick White collected the pup and took it to the British occupied Egyptian port of Alexandria. 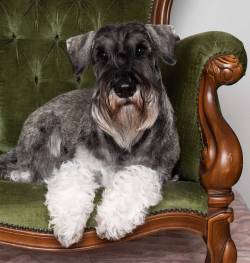 After the War, Patrick took Franz back to England where, on the recommendation of a judge, the Kennel Club (UK) gave him a pedigree and officially registered him. Patrick then bought a Schnauzer bitch, Blacknest Brevity to keep Franz company during the long months the pair sailed on board a ship to Australia. Once here, Patrick and Manoly bought a second bitch, Blacknest Charity to keep Franz and Lottie company during their mandatory six-months quarantine period. Then Partick and Manoly the established the Grauvolk prefix and had Franz registered as Ironsides of Erehwon ('nowhere' spelt backwards).

They then imported Karen of Knells. Together with Franz, they produced many champions under the Graufolk prefix. Partick and Manoly were very successful in the showring. This put Schnauzers on the map here in Australia[2]. 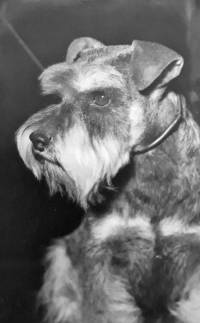 History of Schnauzer (Miniature) in Australia

Later that year, Sylvia Cerini imported a son of Wicket Keeper as a birthday present for her husband Clem. This was the Schnauzer (Miniature) Deltone Deldario (imp UK) pictured on the right, who they called 'David'. 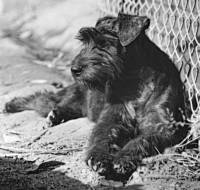 History of Schnauzer (Giant) in Australia

The first Schnauzer (Giant) to arrive here was in 1978 when Mavis Hawkins brought in the bitch, Ch Odivane Vyaren Velvet C.D followed by a dog Ch Paris Garden Diablio C.D also from UK. 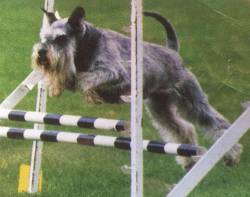 Mrs Hawkins then trained Schnauzers of all three sizes to the title of Australian Obedience Champion. This surely epitomises how passionate Mrs Hawkins was in striving to demonstrate not just the Schnauzer's beauty, but also its reliability and intelligence[3]. To attain this remarkable achievement, each dog had to gain titles separately in both Utility Obedience Trials and Tracking Dog Excellent Tests.

Her three Schnauzers that were awarded these titles were:

Despite the Schnauzer coming in 3 sizes, their heads have the following similarities:

[2] Andrew Kidd, "The History of Purebred Dogs in Australia" published by OzDog Newspaper 1997 The Schnauzer Page 264