Diagram of a dog's nail

Dogs' nails were originally developed to dig to make a bed or to assist in gripping uneven surfaces. But in modern society, soft beds and smooth surfaces can be insufficient to wear down the nails. So it is important that you trim them. When dogs' nails are long, they can also be sharp, especially the front nails. These can scratch human skin, even drawing blood. Additionally long nails can cause the dog discomfort, throwing its weight on the back pad rather than evenly spreading it over the dog's entire foot. Some dogs, especially our elderly pets may also need their back nails trimmed. Here we discuss different methods of trimming dogs' nails.

The Anatomy of the dog's Nail

Unlike our nails, the dog's nail is hollow like a tube, just like the horn of a ram. Within this horny 'tube' lies the 'quick' containing a mixture of blood supply and nerves. Trimming the nail removes the excess that grows too far beyond this quick. If you cut the quick you will cause the dog extreme pain which usually means he will not allow you to touch his feet again! So choose carefully which way you wish to trim your dog's nails. In extreme cases when a dog has been traumatised by painful nail trimming, he may have to undergo sedation by a vet every time the nails need to be trimmed. Alternatively trimming dogs nails can be a rewarding experience, even fun for both you and your dog! 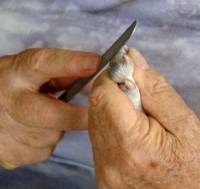 A file is the safest way to trim a dogs' nails. Put your dog in a comfortable position for both you and your dog. A grooming table with a noose is one practical way. Another is to lie the dog on your lap. Some dogs will let you file the nails whilst curled up in front of the fire or relaxed when lying on the couch! An old-fashioned human file like the 'Diamon Deb' or similar works well on small dogs, whilst a file designed as a metal working tool called a second cut is excellent for larger dogs.

To file, first steady the nail from behind with your index finger or thumb as shown from the top of the nail. Then file with the other hand from underneath nail in an upwards direction. It could take around 20 strokes until the quick underneath the nail feels a little soft when touched with your fingernail. This method gives perfect control as you can immediately stop when you get close to the quick, or the nail starts to get soft, or should a drop of blood occur. However this method takes time and is tedious. Praise and treats at the conclusion of this process can assist with dogs not being too worried about having his nails filed. 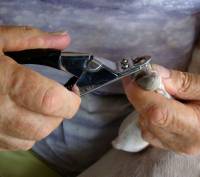 Nail Clippers are the quickest method to cut dog's nails but are also the most dangerous! There are several types dog nail clipper tools available. Those with a scissor action I believe cause the most stress to the dog as they squeeze the sensitive mix of nerves and blood vessels or 'quick' that runs up the centre of the nail. With the type of clipper shown with one fixed end and a moving blade, there is a more control and less trauma. Having said that, when nails are white and transparent and you can see where the quick finishes, you can safely remove sharp ends of the nails by this method. But with black or dark coloured nails, judging where the quick finishes is guess work and that's when problems usually occur. If you do use this method, you will need to file off the sharp edges that are left by the cutting action of this type of tool. 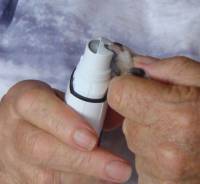 Electrically driven, these nail grinders have stone grinding wheels. However, the dog must be trained from a young age to cope with the noise (which is like having your dentist drilling your teeth). There is also the problem indicated above of going too far and damaging the quick. But if your dog is trained to cope with this, this method can be very successful. It is the preferred method used by many professional dog groomers and breeders. For the less experienced pet owner, there are purpose made dog nail grinders like the one pictured that do not spin so fast and the stone grinder is somewhat protected by a surrounding plastic case. 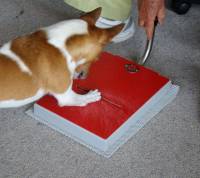 An Australian innovation, this is an entirely new approach to trimming dog's nails. Instead of touching your dog's feet, you shorten his nails by playing a game with him! The 'DiggerDog Nail File' is based on the dog's natural instinct to dig. The principle of this method is that the dog digs or scrapes his nails along an abrasive surface, so shortening his own nails. So either the dog himself or you can stop when the nails are sufficiently being worn down.

The device consists of a simple box covered with the abrasive surface, including its sliding drawer. It also has a handle which operates a sliding door to a concealed space. But you operate the drawer into which treats or the dog's favourite toy has been placed. In the beginning as soon as the dog starts digging for his treat or his toy, you open the lid immediately so the dog quickly receives his reward. This process is repeated several times until the dog learns that when he scratches on the abrasive surface, he is rewarded. It does not take too long for the nails to be worn down to the required length. I have personally found this method easy for me and fun for the dog. In my opinion, it is certainly preferable to any of the three above more conventional methods!

Each of these methods has its pros and cons, depending on your level of experience and the type of dog that is having its nails trimmed. Some of these may be used in combination and over time you may change the way you prefer.  For example, you may want to use the nail file just to even up the nails after one of the other methods above has been used.