History of Dogs as for Worship

In Africa around 3,000 BC early civilizations occurred along fertile valleys where south west Asia (the Middle East) joins north-east Africa (Egypt)[1]. In these early dwellings some of the hunting dogs were so valuable that they were worshipped and/or became idols. The villages that dogs protected were probably an early type of Gazehound. These are portrayed in some of Belzoni's sketches similar to the Talbot Hound pictured with long ears and a broad muzzle.

They were valuable because they assisted in finding and killing wild animals which provided meat to sustain the people. Such was the dog's value that Egyptian philosophers encouraged the family of a dog who died to shave themselves as their expression of mourning.[4]

Additionally in Egypt, burial sites dating back to around 2,500 BC contain skeletons of dog and humans entombed together. Although the significance of this burial ritual varied from country to country, it is clear that the bond between the two species, human and canine, was by this time firmly established. These burial sites also indicate some dogs were involved with ritual killings as a way of being worshipped.

In ancient Egypt in Northern Africa there were different types of idols more than 2,000 years ago. Some dogs were portrayed as a sacred animal appearing on the friezes of Temples as emblem of the Divine Being. This is substantiated by the following quotes: 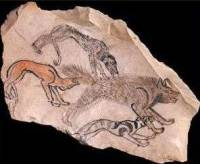 However, the Jewish belief at that time was somewhat different. Because dogs also cleaned the streets from offal that was thrown away, in both the New and the Old Testament the dog was spoken of singularly with abhorrence and was ranked among unclean beasts. Bearing in mind that the Jews had just escaped the tyranny of the Egyptians, idolatry was not established amongst the Jews[4]. Despite this, dogs were still used by the Jews to protect their flocks from wild beasts[2].

now that they are younger than I have me derision, whose fathers I have distained to set with the dogs of my flock[2].

Note: Derision = the feeling someone is laughing at you; distained = unworthy

Here are three examples of the dog being worshipped as an idol.

[4] Quoted in William Youatt 'The Dog" published 1848 London Charles Knight Fleet Street (under the Superintendence of the Society for the Diffusion of Useful Knowledge.) Chapter 1 Page 4 Herodotus, lib.ii.c.66