Some knowledge of the anatomy of a dog is essential for any person who is interested in studying dogs. This section explains in simple terms some of the anatomical terms used by dog professionals and Breed Standards when referring to a dog's basic structure.

Principal Bones of the Legs 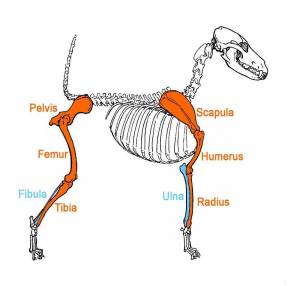 Principal Bones of the Legs

The forequarters, are in three sections:

The Front Angulation is the angle formed by the Scapula and Humerus.

The hindquarters, are in three sections:

The Hind Angulation is the angle formed by the Femur and Tibia (and Fibula). 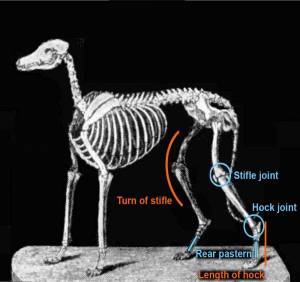 The Stifle is technically the dog's knee on the back leg. This is the joint forming the junction between the femur and the tibia and fibula, (above) plus the patella which slides over the joint as the dog moves (please click on picture to enlarge).

The term 'turn of stifle' is the angle made by these bones.

The Hock is a joint forming the junction between the adjacent bones, the tibia and fibula and several bones which make up the rear pastern.

The term 'length of hock' is the distance from the top of the hock joint to the ground. The length of hock encompasses the rear pastern. 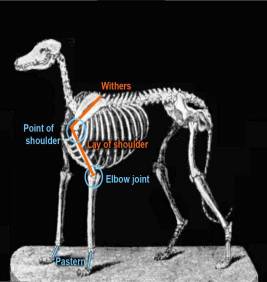 The withers is the highest point of the shoulder blade and from whence the height of a dog is assessed.

The shoulder blade and humerus are attached to the dog by muscle only so the shape of the ribcage affects their placement.

The knee on the front leg equates to the human wrist. But it is  sometimes incorrectly called a 'knee' when it means the joint where the foreleg joins the pastern. Technically the knee equates to the stifle joint on the hind leg which also has a patella.

What is commonly called the pastern is actually the front pastern. This is the dogs' main shock absorber, so its length is important in dogs such as the Borzoi and this Greyhound whose double suspension gallop requires great flexibility. 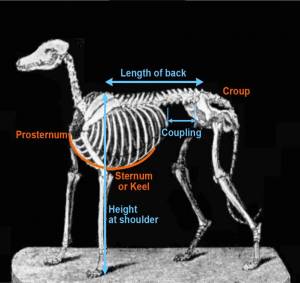 The height at shoulder is the distance from the withers to the ground.

The coupling is the distance from the last rib to the pelvis. Looking over the dog's back from above, this area is called the loin.

The croup is that muscular area on the rump or buttocks of the dog, forward of the set-on of tail. Where there is a sharp decline in angle of the croup, it is can be referred to as droop.

The prosternum is the most forward projection of the rib cage which forms the front of the forechest.

The keel, brisket or sternum is the lower curve outline of the chest or ribcage.

The spring of rib means the degree of curvature of the ribs which form the expandable cage that protects the heart and lungs. The articulation of the ribs with the backbone allows them to expand as the dog breathes.

Well ribbed back is a separate definition meaning the physical length of the ribcage from prosternum to coupling. Note the last rib is not joined to the sternum and is therefore commonly called a floating rib.

The back is that portion of the topline from the withers to the set-on of tail.