A relic from the past, the Irish Water Spaniel is not your conventional Gundog! Unique with his barrel shaped body giving him a characteristic roll when he trots, his large, spreading, hairy feet, his hairless 'rat tail', and his oily, curly, rich dark liver coat, he is the only remaining British Water Spaniel among today's pure breeds.

History of the Irish Water Spaniel 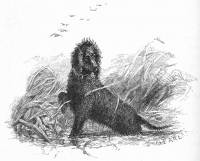 The first classifications of Spaniels were into Land (or Sporting) Spaniels and Water Spaniels. In 1570 AD, Dr. Johannes Caius described Water Spaniels as having 'long, rough, and curled hair' with the end of his tail is somewhat bare and naked, as if by shearing off such troublesome and needless hair.'[7] 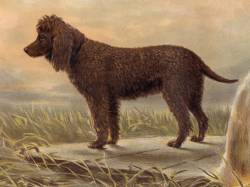 There were also Water Dogs or 'Canis Aquaticus' known along the European coast of France, Portugal and Spain described by Gervase Markham from in his book 'The Art of Fowling' (1655 AD) which had a similar coat shaved from the shoulders to the hind legs so the dog would be less hindered when swimming. These European Water Dogs shared a common origin with the Irish water dogs because Ireland traded regularly with the Spanish Empire during 1600's and 1700's. In Northern Ireland in 1607 AD, Dr Lombard, Bishop of Armargh describes 'water dogs with waterproof coats and a rat tail that pursue water fowl'[4].

The Irish Water Spaniel really came into his own in the 1800's. He worked differently from conventional Spaniels (Sporting) and Retrievers that were selected and trained to be 'soft mouthed'. In other words the choice of wealthy sportsmen were Spaniels that would flush and Retrievers that would retrieve without damaging the game. They hunted game mainly as a sport. But Mr Skidmore, an enthusiastic supporter of the Irish Water Spaniel and regarded as one of the greatest authorities on Gundogs around the 1880's, wrote: 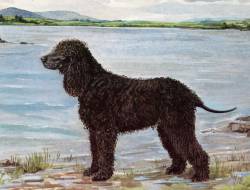 "... much has been said and more has been written about the Irish Water Spaniel. Some have called him hard-mouthed and headstrong, and consequently no use in the field; while others have said that when a person only keeps one dog, and expects him to be Jack of all trades, there is nothing like an Irish Water Spaniel... for wild-fowl retrieving I think it is admitted that they have no equal. Their coats being of an oily nature, are well adapted to resisting the cold and wet, while their courage is such that they fearlessly dash into water in the coldest weather.[5]" 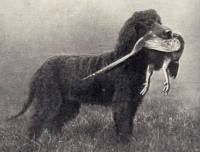 In the early decades of the 1800's, the potato famine left many of the poorer Irish people starving. So it appears feasible that game, wading birds and ducks from the marshes and bogs particularly in Southern Ireland, would have provided a staple diet for the poor people. This hard-mouthed hunting dog not only found game, it would kill as well as retrieve wounded birds and animals[1]. Maybe this is why the Irish Water Spaniel was selected for certain physical characteristics. 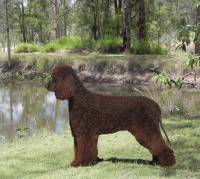 These poorer Irish people who could not afford guns, would have no doubt used primitive methods of hunting which often maimed birds or game. So in these times of extreme hardship, it was a definite asset to keep a type of dog like the Irish Water Spaniel. This dog with his waterproof oily, curly, coat so he could survive the cold, wet conditions also had large feet and a powerful body capable of working in the bogs and marshes. These physical characteristics, as well as the ability to make the unilateral decision to kill and retrieve wounded birds and animals rather than allowing them to escape, would have helped many Irish people survive when their potato crops failed. 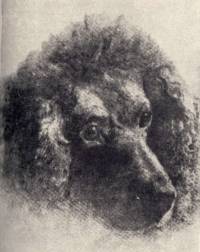 It is generally acknowledged that during the early 1800's, Justin McCarthy established the Irish Water Spaniel as a pure breed[2]. He kept a prominent kennel of excellent working water dogs that were not only somewhat hard-mouthed as described above, but also bred true with these unique external features. His kennel included a dog called 'Boatswain', born in 1834 whose descendants were first shown at the Birmingham Show in 1862. This is how the Irish Water Spaniel became listed in the First English Stud book and survived the transition from a working water dog to one of our oldest pure breeds. 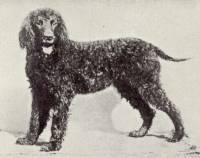 There is record of Irish Water Spaniels in the VP&KC catalogues from 1891 together with "Duck' being imported into Australia in 1892 and 'Liberator' in 1893 (pictured). But disappointingly, although being reported as handy in the marshes of early Gippsland in Victoria the breed seemed to die out[3]. Then, in the early1950's a noted sportsman, Mr 'Dick' Morten established his Irirangi in New Zealand. Several breeders in the various states of Australia obtained their foundation stock from this source which is behind many of our Irish Water Spaniels today[6]. 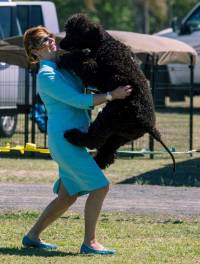 The Irish Water Spaniel is a rich dark liver water dog whose body is covered with dense, oily dark liver ringlets, a coat that should never be woolly. Standing 51 - 58 cms (20 - 23 inches) tall, he is a strongly built but compact Gundog with unusual barrel shaped ribs, large and spreading feet making him particularly suitable for shooting wildfowl. He has an aloof but stable disposition with an endearing sense of humour. 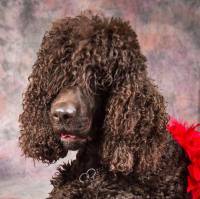 His skull is long and the dome high and of sufficient width to allow adequate brain capacity. The stop rises gradually towards the skull. The long, strong muzzle is somewhat square, housing a normal scissors bite and finishes with a large, well developed nose of a dark liver colour. The face has smooth hair. The eyes are small and almond shaped and the dropped low-set ears are long and oval shaped and hang close to the cheeks.

The neck is powerful and sufficiently long to carry the head well above level of back.The shoulders are powerful and the deep chest appears quite curved and wide when viewed from the front of the dog looking between the well boned, straight forelegs. But when viewed from over the top of the dog, the ribs are so well sprung behind the shoulder, they appear to have a barrel shape. However the dog is compact so the back should be short, broad and level. The loins are deep and wide and so powerful that the well angulated hindquarters are strongly coupled to the forequarters.

The feet of the Irish Water Spaniel are unusual for a Gundog dog in that this breed must be capable of swimming. So their feet must be large and spreading so they can act like paddles in the water. The abundance of hair over and between the toes enhances this ability. 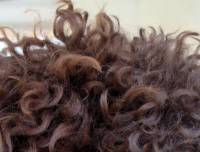 The coat of the Irish Water Spaniel is also unusual in that it is also designed for dog capable of swimming. The dog should be covered with a coat consisting of dense, tight, crisp ringlets, free from woolliness, with a natural oiliness. 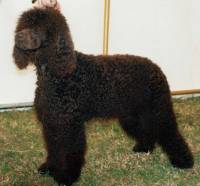 The low-set tail which is thick at the root and tapers to a point is also a feature of the breed and is unusual because it is only covered with curls for only the first three to four inches when the curls stop abruptly, leaving the remainder bare or covered with short, straight fine hair. That is why it is usually called a 'rat tail'. Although the Irish Water Spaniel should move freely and strongly and trots with balanced reach and drive, he has a characteristic roll caused by the unusual barrel shape of his ribs.