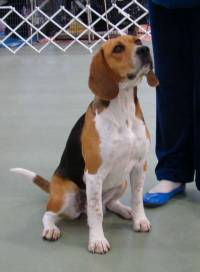 The Harrier is a Scent Hound developed specifically to hunt hare. To this end, he has been selectively bred to retain the intelligence and high scenting power to deal with the hare's cunning ways which are more varied than those of the fox. In size he fits between the Foxhound and the Beagle.

History of the Harrier

A physical description of the Harrier and the manner in which he worked was first described by the Greek philosopher Xenophen (430 - 354 BC), over two thousand years ago. He gets his name from the Old English word 'Harry' meaning to annoy. Over the centuries those who hunted hare on foot used smaller sized Harriers while packs of Harriers used by horsemen were usually taller[2]. 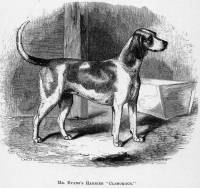 When a Harrier picks up the scent of a hare, he typically sits on his haunches and

'lifts up his voice'..  that our ancestors rather liked so long as the sitting was not too prolonged and was only exhibited when first owning the scent. The tongues of these old-fashioned Harriers were full and melodious, and I confess, until I once more hear the 'merry peal' which I can so well remember in my youthful days, I shall not believe in pure Harrier blood'[5]. 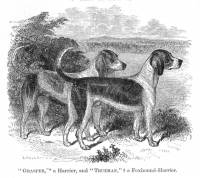 The Harrier becomes a Pure Breed

The American Kennel Club first recognised the Harrier as a pure breed in 1885. It was also listed in the First English Stud Book and subsequent editions until 1915. After that, for the last century the Harrier's pedigrees have been maintained by English Association of Masters of Harriers and Beagles. The FCI recognised the Harrier in 1974.

The History of the Harrier in Australia

Hunter with Pack of Harriers

In Australia, 3 Harriers plus one bitch with pups were entered by Dr Grant of Launceston in the First Exhibition of Sporting and other Dogs held at the Exhibition Building, Melbourne on April 7 and 8, 1864[4]. Then Tyzack's Annual records that 14 couples of Harriers were imported by Miller Brothers instituted by E Woods in 1877 and these founded the Findon Hunt Club. In 1892, a further 3 couples were imported by Lord Hopetoun, and in 1904 the Findon Hunt Club imported a further 3 couples[3]. Records of pedigrees have been kept by Findon Hunt Club ever since separately from our usual registration bodies. 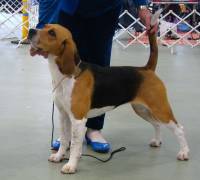 But in 1972, ANKC registered Harriers from English and New Zealand parents were exhibited at the Royal Melbourne Show. Today they are recognised as pure breed in Australia again.

Although the Harrier is smaller than the Foxhound but larger than the Beagle standing 19 - 21 inches tall (48 - 53 cms), his general build is somewhat racier. He is always short coated and comes in any recognised hound colour, with a white tip on his tail ('stern'). Essentially a pack hound, he is active and although he has a natural instinct to hunt, he should always be friendly but not aggressive. 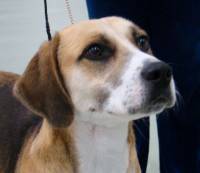 The head is of medium size with equal proportions of skull and muzzle, separated by a slight stop. The muzzle must not be snipey. Instead the flews just cover the underjaw which houses a normal scissors bite. The nose is large with wide open nostrils, the eyes are of medium size set well apart, and the dropped ears are set above the level of the eye and lie close to the cheek.

The neck is clean and of ample length. The body is slightly longer than height at withers with a deep chest, a broad level back with a slight arch over the loin. The shoulders are well laid and the forelegs straight and well boned with a slight slope or spring in the pastern. 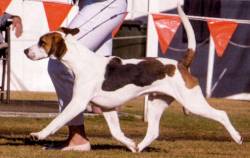 Modern Harrier on the move

The hindquarters are strong and muscular with a good turn of stifle and also well boned. The feet are neither too tight nor too round with strong nails. The tail is strong at the butt (root) and set on high tapering to a point. It is carried from between 1 o'clock and 3 o'clock but not curled over the back. He moves with free long strides and good drive from behind but with no tendency to roll.

In 1570, Dr. Johannes Caius used Harrier as a generic name describing a type of dog with a keen sense of smell in his classification that was written in Latin and translated into English by A Fleming in 1576[1]. The original translation of this important work is in my opinion too difficult to read to be printed in its original form. So it appears here as my interpretation in modern English:

Of the dog, called a Harrier 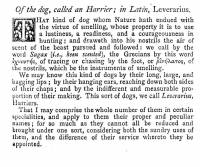 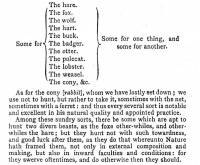 That kind of dog has a keen sense of smell. It draws into his nostrils the scent of the beast to be pursued and followed on foot. This dog does so with courage and lust. 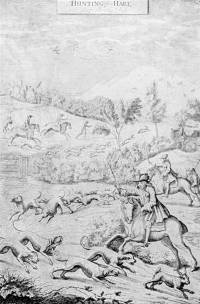 We may know this kind of dogs by their long, large, and bagging lips; by their hanging ears, reaching down both sides of their cheeks; and by the indifferent and measurable proportion of their making. This sort of dogs, we call Harriers.

These consist of a number of different hunting dogs, some of which have names applicable only to certain types of prey. But so they can all be brought under the same heading, here is a list of some of the prey on which this type of dog can be used:

We do not hunt the rabbit but rather to take it with the net or ferret, but there are several types of harrier that are excellent in their natural ability to do so. Among these, there are some which hunt the fox and the hare. However, they do not hunt as successfully as would have had they been built specifically for this work not only in external features, but also with the instinct, for they swerve and miss more often than they should.

[1] Dr John Caius, "Of Englishe Dogges: The Diuersities, the Names, the Natures, and the Properties", London, 1576, translated into English by Abraham Fleming, Pages 9-10. The work was originally published in Latin in 1570 as "Johannes Caius, De Canibus Britannicis".

[4] Catalogue of the First Exhibition of Sporting & Other Dogs, Thursday & Friday April 7 & 8, 1864 promoted by the Council of the Acclimatization Society, printed in Melbourne by Mason & Firth, Printers, Flinders Lane West Page 15

[5] J.H.Walsh, under the name 'Stonehenge', 'The Dogs of the British Islands' (Fifth Edition) Published by 'The Field' Office, 346 Strand, W.C.London 1886. Book ll, 'Hounds and their Allies' Chapter ll, Modern Hounds Hunting by Nose. The Harrier Pages 137-8