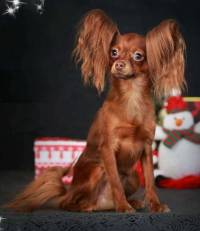 The Russian Toy (Smooth) and (Long) is one of the world's smallest dog breeds. It developed as a Pure Breed in isolation when Russian people were suffering political segregation under Communist rule. This required the skill and leadership of extremely skilled breeders. It is a tribute to the passion of these people that today the modern Russian Toy (Smooth) and (Long) are enjoyed and admired by dedicated enthusiasts world wide.

History of the Russian Toy (Smooth) and (Long) 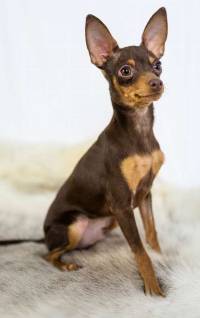 In the 1700's when pure-breed dogs were beginning to emerge, Russia was not isolated. Like other European countries, they had their share of English pure-breeds like Bulldogs, Setters and English Toy Terriers. In particular the Tzar, Peter the First had an English Toy Terrier 'Lizette' which is preserved by taxidermy and can be seen at the Saint Petersburg Zoological Museum.

By the beginning of the 1900's when pure breeds were emerging world-wide, small dog breeds like Toy Terriers and other 'Decorative' dogs accounted for one third of the dogs exhibited in Russia. But then came political turmoil which caused many people to migrate to 'the West'. So these early bloodlines became almost decimated.

History of the Russian Toy (Smooth) 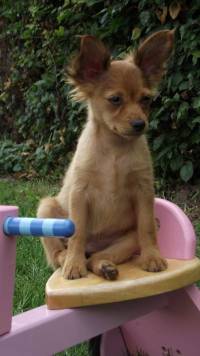 Immediately after the Second World War, a few Russian soldiers that returned home brought small dogs with them. Some were just crossed breeds. But those with pedigrees were mainly red (German) Miniature Pinschers and English Toy Terriers (Black and Tan). But because these were 'decorative dogs', they were considered useless under Stalin's rule which only allowed the breeding of 'dogs that could benefit the National Economy'. Although Stalin died in 1953, the political isolation of Communist rule remained. This precluded the importation of anything from the 'West', particularly small dogs. But this political isolation led to the development of a smooth coated Toy Russian Terrier, quite different from its English Toy Terrier counterpart. 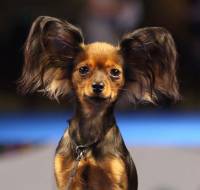 At that time, Russia and the other Eastern countries that were under Communist control were separated from the West by a physical barrier consisting of hundreds of thousands of miles of well patrolled wire fences, walls, wide rivers and seas. This was known as the 'Iron Curtain', a phrase first coined by Winston Churchill. The people who lived within this barrier were forced to obey Communist 'Rules' or suffer the consequences of being arrested for political or other 'crimes'. As a result, an estimated 20 million people died. 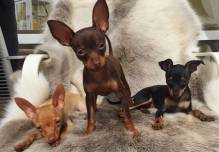 During these three decades of separation, the Moscow Society of Decorative Dog Owners was formed. Under its banner dog breeders tried to restore breeds from any available breeding material, with or without pedigrees. A new Breed Standard was drawn up for the Russian Toy Terrier (Smooth) that was formally called an English Toy Terrier. It was a little smaller (18 - 26 cm or 7 - 10 inches) than the English Toy's (25 - 30.5 cm or 10 - 12 inches) with a deeper stop, more dome in the skull and solid black and various shades of red allowable.

History of the Russian Toy (Long) 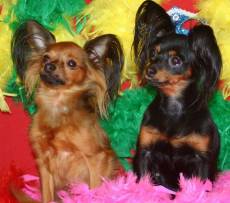 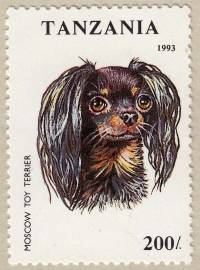 As developing a Toy breed was against the principles of Communist Rule, it must have been not only extremely difficult, but also extremely brave. Political punishment during this time often meant imprisonment or even death. As keeping or breeding pet dogs was effectively banned, it was written 'even though these dogs lived with Evgenia, they were registered under other people's names'.[2]  This confirms that the Moscow Toy Terrier was developed secretly as a pure breed. What a remarkable feat of dedication! 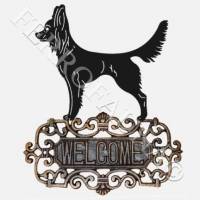 During the time of the Moscow Toy Terriers' development, the FCI did not recognise any Russian breeds. Because this was the first Russian breed to attempt to gain FCI recognition, the paperwork took around two years. One of the FCI's requirements was that the word 'Terrier' be dropped from its name. At their General Assembly in 2006 the Russian Toy in its two varieties finally became FCI recognized. 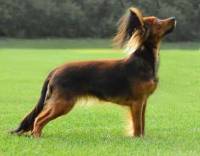 The Russian Toy is a very small, harmoniously built square dog standing just 22 - 27 cm 7 - 10.6 inches (25 cm preferred), and weighing up to just 3 kg or 6.5 pounds (2.3 kg preferred). He comes in black and tan, or red, fawn or cream or brown with or without black. He also may come in dilutes of these colours. In other words he may be blue and tan; lilac and tan or red with blue; red with brown or red with lilac. The colour of the nose should match the main coat colour. 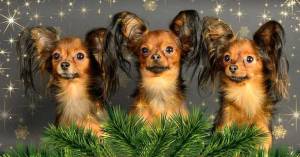 The wedge-shaped head should be small compared to the body. The round skull and foreface should be neither too wide nor too exaggerated. The stop is clearly pronounced. The muzzle is lean and pointed and perceptibly shorter than the skull, with tight fitting lips. The nose is well developed with open nostrils and, like the lips should be either black or match the colour of the lips. The round eyes are quite large, as dark as possible and should look straight ahead. The large, thin ears are high set and erect, shaped like an isosceles triangle. In the long-haired variety they may be slightly directed side-wards. The Russian Toy should have a normal scissors bite. However, a level bite containing only 2 or 3 pairs of incisors is permitted but not desired. The teeth should be white and of medium size. 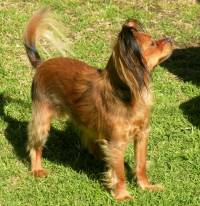 The length of the Russian Toys body is approximately equal to its height at shoulder. The neck is long and lean and carried high. Viewed front on, the lean legs should look straight and parallel and the pastern should be vertical. When viewed from the side, the front legs are set under the body and the pastern looks almost vertical. The legs are only slightly longer than than half the dog's total height at withers. The shoulder blades are moderately long and approximately equal to the length to the humerus or upper arm. The chest reaches the elbows and is oval in cross-section. The withers are slightly pronounced and the strong, straight topline gradually slopes from the withers to the tail set. The underline is nicely curved from the chest to the flanks. 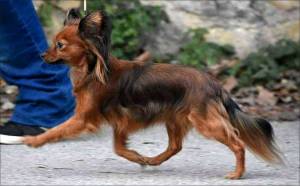 The croup slopes gently to the moderately high set tail that is carried level as an extension of the topline. The feet are small and oval and the nails and pads are black or matching the coat colour. Looking from the rear, the hind legs are straight and parallel, and stand a little bit wider than the forelegs. Viewed in profile, the turn of stifle is in balance with the foreleg angulation. The hindquarters are well developed and the hocks should be perpendicular to the ground and parallel to each other when the dog is standing. 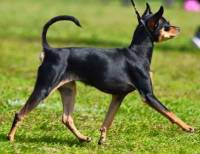 He moves with light, energetic, steps with moderate reach, a straight topline, high tail and proud head carriage. The high set tail has neither kinks nor curl. It is set on moderately high and should be carried higher than the back level. 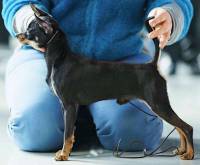 Russian Toys come in two varieties. The smooth-haired has short, close-lying, shiny hair, without undercoat. The long-haired is covered with close-lying moderately long (3-5 cm), straight or slightly wavy hair which should not hide the natural outline of the body.

Russian Toy and the Chihuahua Comparison

These two 'pocket sized' breeds, both coming in Smooth and Long Haired varieties, are arguably the world's smallest pure breeds. Developed independently on different continents, their comparison is presented here.

[1] Valery Novikov, 'Russkiy Toy', Self Published in Moscow in 2013. Translated into English by Yvonne Sandberg-Åberg /Kennel Toy Angels Sweden. Chapter 1 'The History of the Breed' Pages 4 - 11. The author P. 135