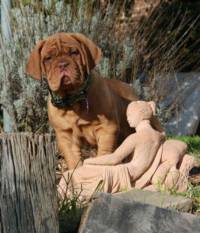 These two ancient breeds of Mastiffs with their loose skin may look somewhat similar. But their similarities and differences make an interesting study. Both breeds are very striking - the Neapolitan with his massive head and wrinkles and who could forget the Dogue de Bordeaux 'Hooch' who starred in the famous Tom Hanks film, 'Turner and Hooch'.

History of the Neapolitan Mastiff and Dogue de Bordeaux 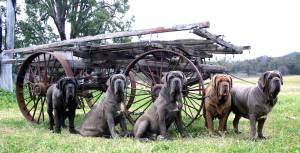 Both breeds probably had origins dating back to the earliest civilizations of Mesopotamia of around 2,000 BC. At that time wars and migrations spread settlements in several directions, together with their large Mastiff type hunting dogs. Those that went westwards travelled towards the eastern coasts of the Mediterranean basin which was then occupied by Phoenicians.

The Romans were very proud of their large Italian Mastiffs, with Julius Caesar referring to them as 'Pugnaces Brittanie'. Meanwhile different types of French Mastiff's (in the French language called "dogue') were developed in the various regions of France and writers of sport around 1400 AD called this type of dog an 'Alaunt'. The Neopolitan Mastiff was saved from extinction in the late 1900's by the Italian journalist Piero Scanziani[5] and with the advent of dog shows, the Neopolitan Mastiff was also resurrected in France to resemble those depicted by ancient drawings and engravings. 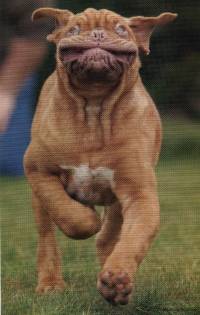 At  a glance these two breeds may look similar. After all, both breeds are massive Mastiffs with thick, loose skin, and both are a little longer than high. But these two breeds are immediately distinguishable by two factors, their colour and their size. The colour of the Neo is usually grey, leaden grey or black, but mahogany brown, tawny fawn and deep fawn are permissible and even light brown or fawn is tolerated. The Dogue however can only be fawn with or without a black or brown mask. Regarding the size, the Neo is slightly larger than the Dogue within the height range of 58 - 75 cm (23 - 29.5 inches) while the smallest Dogue bitch may weigh only 45 kilo (110 pounds) with the largest Neo dog weighing up to 70 kilos (154 pounds). 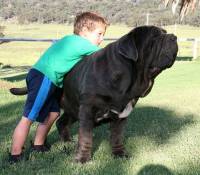 They also have the following major differences:

1. Wrinkles - the Neo must have significant wrinkles falling from the head to thick heavy lips which combine with the dewlap of the neck. But the Dogue's wrinkles are far less pronounced, somewhat like the Bulldog's.

2. Head - the Neo's skull is flat with parallel head planes. But the Dogue's head is far more angular with a slightly concave muzzle which curves gently upwards from the skull

3. Muzzle and Bite - the Neo's muzzle is practically square, with a normal scissors bite but because the muzzle of the Dogue is slightly concave and curves upwards, he has a distinct chin with an undershot bite.

The following table compares the main points of these two ancient Mastiff breeds: