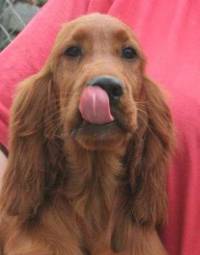 Although the Red and White Setter appears to be the older of these two breeds and an obvious descendant of 'setting spaniels', it is the Irish Setter that is better known today. The Irish Setter is a comparatively modern breed whose rise in popularity began around the 1860's with the advent of dog shows. Now almost two centuries later, his affectionate temperament, rich chestnut coat and sleek build have made him the glamorous dog we know today.

History of the Irish Red and White Setter

The 'Setting Spaniel' described by Dr Caius in 1570 AD was probably a direct ancestor of the Irish Red and White Setter. But the first documented description of an Irish Setter as such was when a variety of red spaniels (in Gaelic, Modder Rhu) was recorded in 1770 AD. 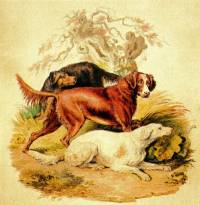 Then came the accompanying drawing by Sydenham Edwards in 1805 where the centre dog is clearly a Red Setter with a white blaze up its forehead. This is confirmed by the recollections of Mr W Bennett who wrote the following in the early 1800's:

"My inquiries relative to the above breed (Irish Setters) have tended to convince me that, so far at least the Midland and Western Counties of Ireland, Dublin, and its vicinity were concerned... the Red Setter was but seldom encountered, and that the Red and White Irish Setter (differing in many essential qualities and general appearance from the English variety) is well known and highly esteemed[1] " 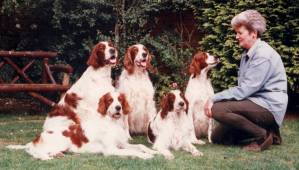 A Group of Red and White Setters

The Irish Red and White Setter becomes a Pure Breed

The Red and White Setter had almost disappeared when Irish Setters were first recognised as a pure breed. First exhibited in separate classes at Birmingham in 1860, by 1872 there were still separate classes for 'reds' and 'red and whites'. But the latter could not successfully compete in the show ring with the rich red or 'blood-red' specimens. So they effectively died out. 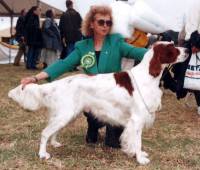 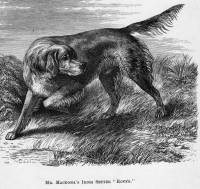 Although known to sportsmen throughout Britain before he became famous as a showdog, the Irish Setter had his beginnings as a separate pure breed when a class was set aside for him in Birmingham in 1860. Irish Setters then became a recognised pure breed by being listed in the First English Stud Book (1859-1874) with the Irish Red Setter Club of Ireland being formed in 1882.

First illustrated in 1865, the dog that worked well in the field was originally quite heavy in head and general build. Although Irish Setter's style of hunting is described as 'very beautiful, with his head up and feeling for the body scent', he proved to be 'unreliable in the field requiring work to keep him in a state of control fit for immediate use with the gun'[6].

History of Irish Setters In Australia

Three Irish Setters competed in Melbourne's first dog show conducted in 1864[3]. By 1882 when documenting registrations began, three more Irish Setters were registered as being imported. By 1909 another 10 were imported as well as an additional 60 registered as having been bred here[4]. Irish Setters have been extremely popular in Australia ever since.

Irish Setters really began making their mark on Australia's dog world when some wonderful English dogs were sent out here because of the difficulty of keeping and feeding them when World War Two broke out. English Ch Marksman of Ide (Imp UK) bred by the famous Joe Braddon was one of the beautiful dogs that only came here because of the War and he won Best in Show at Melbourne Royal in 1941.

Because of the bloodlines available after World War Two, some of our best known Irish Setter kennels were founded during the 1960's when they also competed in Field Trials. 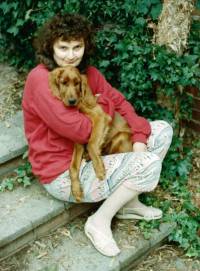 Then, after a century of imports from England, the 1970's saw the arrival of American imports which added bone and a more glamorous coat to our Australian dogs. This boosted the popularity of Irish Setters enormously and saw the breed entry at the Royal Melbourne Show grow steadily from 102 in 1970 to a whopping 325 in 1977 for the famous English Gundog Specialist judge Mr L.C.(Jimmy) James. 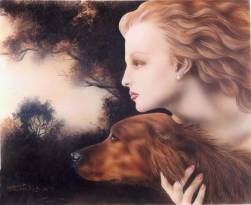 However by 1980 the entry had dropped back to 206 declining further to 108 by 1990[5]. But during this wave of popularity many dedicated breeders emerged. Since 1980 they have so far won 14 Best Gundog Exhibits and 2 Best Exhibit in Shows at Melbourne's prestigious Royal Show. So those who succeeded in using bloodlines cleverly, laid a solid foundation for the Australian Irish Setter enthusiasts who are still actively breeding and showing today. 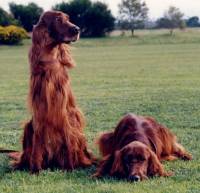 The Irish Setter is a racy, refined dog. Handsome, full of quality with untiring energy, he is also demonstratively affectionate. While there is no specified height or weight limits on this rich chestnut coloured breed, an extreme type with an exaggerated coat and general structure is seen more often than the classical type. 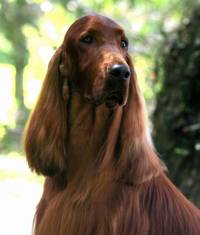 The head is long and lean, the skull oval in shape, a well defined occiput and a moderately sloping stop between the raised eyebrows. The head planes are parallel and the moderately deep muzzle is of the same length as the skull. The flews must not be heavy or pendulous and the nose can be dark walnut, dark mahogany or black. He has a normal scissors bite. Set under his brows are his almond shaped eyes which can be dark hazel to dark brown but always with a kind expression. Although the ears are set on low and well back, they must be of thin texture and never heavy like a hound's.

The neck is moderately long, muscular but clean without dewlap, in profile flowing into well laid shoulders. The high withers give the topline the appearance of sloping gently down towards the slightly arched loin, this gentle slope being made more obvious by the low-set tail which is carried level with or just below the level of the back. Viewed from the front, the forelegs are straight and sinewy with plenty of bone. The feet are small and firm with strong, well arched toes. Although the front pasterns are straight, they should have sufficient slope to enable them to act like shock absorbers.

The chest should be as deep as possible and although rather narrow, looking over the dog the well sprung ribs should be obvious. The powerful muscles of the hindquarters cover two bones which form a good turn of stifle. The strong, short hocks should propel the dog forwards with a free flowing trot with a coordinated, balanced reach and drive. The croup slopes more than other Setters, causing the tail to be lower set. The tail is thick at the root and tapers to a fine point, its mobility being the thermometer of the dog's mood. 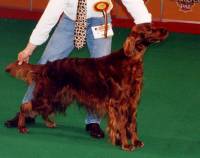 Except for short hair on the head and the front of the legs, the coat should be of moderate length and as flat as possible and free from curl. The feathering on the ears, backs of the fore and hind legs and between the toes, chest, belly and tail should also be straight but it should not be so exaggerated or profuse that it could become impractical should the dog be required to do field work. 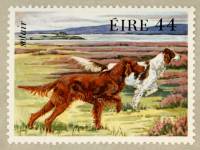 But the rich chestnut colour of the Irish Setter's coat is truly his crowning glory. It should be a clear colour with no trace of black, but a little white on the chest, throat, chin or toes or a small star on the head or a narrow streak on the nose or face should not disqualify. Perhaps they are a reminder of the dogs' 'Setting Spaniel' ancestry!

Comparison between Irish Red and White and Irish Setters

For comparison between the English, Gordon and Irish Setters please follow this link. But as the Irish Red and White Setter more modern than the other 3 Setters, the table below compares it with its closest relative, the Irish Setter.

We have now published a unique book called 'Gundogs Unveiled' Available at our sister site: https://rangeairevision.com/gundogs-unveiled/

[3] Catalogue of the First Exhibition of Sporting & Other Dogs, Thursday & Friday April 7 & 8, 1864 promoted by the Council of the Acclimatisation Society, printed in Melbourne by Mason & Firth, Printers, Flinders Lane West