While we all mourn the passing of the late Queen Elizabeth II, as dog enthusiasts we would no doubt be attracted to the many shots of the Queen with her Corgis. Both inside and outside the Palace, her dogs were obviously her constant companions.

However, as dog people we might also wonder what would happen to the Queen's companions after she passed. Certainly, the UK newspaper 'Our Dogs' reports that the Duke of York, Prince Andrew and his ex-wife Sarah Ferguson would look after 'Muick' and 'Sandy' who they originally gave the Queen as gifts. One can only speculate how her other dogs would live out their 'royal' retirements! 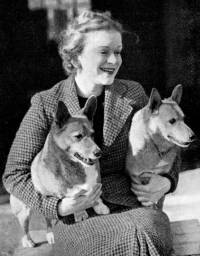 The late Queen Elizabeth II's connection with Corgis began with Mrs Thelma Gray who spent the final years of her life in the Adelaide Hills of South Australia. Although she owned other breeds later in her life, her Rozavel prefix is synonymous with Corgis. She not only lobbied the Kennel Club UK in the first instance to recognise the Corgi as the pure breed, she was singularly responsible for the Royal family's Corgi connection. A senior judge at the Kennel Club (UK), among her prestigious judging appointments was the selection of Best in Show at Crufts in 1975. Surely one of the most famous dog entities to become an Australian!

History of the Welsh Corgi

The name 'Corgi' comes from the Welsh word "Cor" meaning 'dwarf' and "ci" meaning 'dog. Putting these two words together, we have "Corgi" meaning a "dwarf dog". Reflecting its Welsh background, today Corgi's are generally referred to as Welsh Corgi's.

Welsh Herding dogs appeared in the Laws of Hywel Dda, or Howell the Good, King of South Wales. These Laws, written in 920 AD were based on unwritten Welsh legends which placed a value on the various types of dogs according to the job they were required to perform. These Laws stated that a herdsman's droving dog was the same value as an ox! Consequently, the Corgi became popular with Welsh farmers to herd cattle.

These Corgi's were particularly adapted to work the nimble stock which grazed on the short grass of the steep mountainsides and valleys of Wales. The Corgi's short legs also enable it to evade the retaliatory kick when the dog moves the cow along by nipping at its heels.

Today, the Cardigan Corgi with his Roman or Celtic background, is still somewhat influenced by other early Welsh Herding Dog breeds of the counties of the more northern parts of Wales. His Celtic ancestry is reflected by the blue merle colour still commonly seen.

Coinciding with the period when different types of dogs were first becoming classified, in 1536 AD a law was introduced which changed Wales forever. It split the Welsh County of Pembrokeshire from the other 12 Welsh counties, including the one that bore the original name of Wales. This Law demanded its people not only speak English, but also be of Christian Protestant belief answerable to the King of England. This created a civil war between the Roman Catholics and the Protestants, leaving the Southern County of Pembrokeshire isolated from the remainder of Wales. Consequently, this political separation gave us the two distinctly separate types of Corgi, the Cardigan and Pembroke we know today. 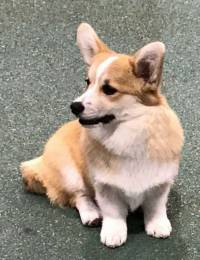 Unlike the Cardigan Corgi with its Celtic or Roman Catholic background, the Welsh County of Pembrokeshire has a protestant background and is answerable to the King of England. Consequently, the Pembroke Corgi also shares characteristics with other Northern Spitz breeds.  Certainly, both the Pembroke and the Cardigan Corgis were required to drove cattle for hundreds of miles as far as the Smithfield Markets in London. As the cattle were a valuable commodity, these versatile dogs were equally able to herd the cattle by day and protect them by night from highwaymen and robbers! Additionally, when owned by peasant farmers, these dogs made efficient rodent killers and guard dogs.

In 1925, the First Welsh Corgi Club was formed in England. However, the Welsh Corgi we know today did not become recognised as two separate pure breeds by the English Kennel Club in 1934. 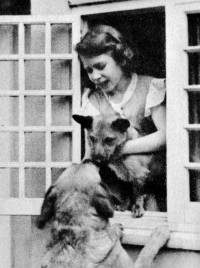 In 1933, the Duke of York, who later became King George VI, purchased Rozavel Golden Eagle as a pet for his two daughters, Elizabeth and Margaret. Twenty years later, by the time Elizabeth became Queen of England, the Pembroke Corgi had become entrenched in the Royal household and Pembroke Corgi's had become the Queen's favourites.

Because the Cardigans did not receive Royal patronage, they never reached the heights of popularity of their Pembroke cousins. Consequently, during the last century the Pembroke Corgi particularly has become extremely popular as a pet. But one thing is for certain, Pembroke Corgi's will always be defined by being the late Queen Elizabeth II's favourites!