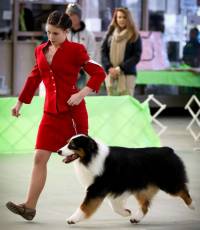 The first official 'Canine Turnout (Juvenile Handlers' Classes)' held anywhere in the world was masterminded for the Royal Melbourne Show 1948 when officials first adapted rules for allocating points for horse dressage classes to dog handling classes for juniors. This concept then appealed to overseas Kennel Club officials. Consequently, junior handling classes became an integral part of pure breed dog showing activities world-wide. Along with many other Melbournians, this pioneering event also played a major part in shaping my life.

How this Concept Evolved 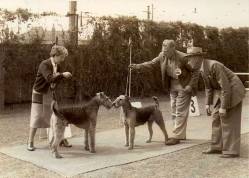 In 1948, Melbourne epitomised the prosperity of the post-World War Two economic boom. When unemployment at an all-time low, Melbourne won a bid to host the 1956 Olympic Games. This was the first time this event was to be held in the Southern Hemisphere. To attract world-wide notoriety, 1948 had to have a special Royal Melbourne Show.

Consequently, the dog section's panel of outstanding judges which included Mr J.W. Marples F.Z.S (Fellow of the Zoological Society) of England. He was the eldest son of Mr Theo Marples, whose books founded the famous publishing company, 'Our Dogs'. Because in 1948 travel to and from the UK was still sailing for months by sea around the Cape of Good Hope, seldom did Australia enjoy the attendance of such celebrities.

Part of this publicity was the first structured Juvenile Handlers' Competition held anywhere in the world. Named the Australian 'Canine Turnout', points were allotted based on the points for the already successful Garryowen (horse dressage) 'Turnout' as follows:

The first event was sponsored by 'Mantons', one of several Bourke Street Stores selling up-market clothing at that time. Because Mr Marples was regarded as a 'fashion expert', the title 'Turnout' was chosen because the rules included points for the colour, design, and appropriateness of the handler's costumes for the breed of dog each child handled[1]. 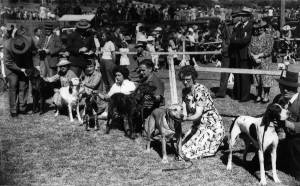 In post-war days, buses transported many of us together with our dogs, to and from the Shows. There were no gazebos, tents, or even grooming tables. We all stood or sat around on the grass beside the rings with our dogs. How we all looked forward to the Royal Melbourne Show where the dogs were displayed for two days on open benches!

Exhibitors who owned cars transported their dogs to the Royal Show and exhibited them. Other exhibitors travelled with their dogs by train. However, some dogs travelled unaccompanied. On arrival, stewards collected these dogs and benched, exercised, and exhibited them. Because all dogs had to be displayed on the benches for two days, stewards fed and exercised the unaccompanied dogs, and returned them to their owners by train. Other exhibitors, like me who were not comfortable leaving their dogs overnight, slept 'rough' in the dog Pavilion. In those days, facilities for dogs at the Royal Melbourne Show consisted of the Cockbill Pavilion for benching the dogs, sloping lawns outside the Government Pavilion for judging the dogs, and a small cottage used for administration. 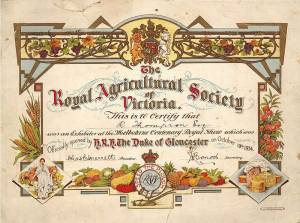 The highlight of these early Royal Melbourne Shows was the Grand Parade which included dogs together with the prize winners of most of the other competing farm animals. The horse events included the 'Garryowen Turnout', the dressage competition for female riders which formed the basis for the first 'Australian Canine Turnout (Juvenile Handlers' Classes).

Junior Showmanship in USA and England

Since 1887, USA ran its first large dog show, the Westminster Kennel Club. Since 1891, England had run its most famous Dog Shows, Crufts. But for Australia, our largest and most famous Dog Show in each State was tied to the Royal Agricultural Society. The National Agricultural Society which pre-dated the Royal Melbourne Show, included dogs in their second show held in 1872. In those days handling was not an integral part of dog showing. Some dogs were even judged on the benches. Dog handling became the skill we know today grew along with competition. 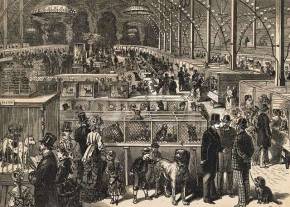 England commenced in 1977 when 'The Junior Handler of The Year' was held at Ascot Racecourse in conjunction with the Richmond Championship Show[3]. By then, the Royal Melbourne Show had been conducting Junior Handler's Classes under specific rules, for almost 30 years!

In the 1920's in USA, the first Child Handling competition was held at the Westbury Kennel Club Show. Then in 1932 in Long Island, New York a competition to introduce a new generation of fanciers to the sport was proposed. This was conducted by Professional Handlers Association and held every year. It was judged by members of the at the Westminster Kennel Club. The winners received silver cups and their names recorded. A perusal of these names is quite a revelation as many of these children became the 'who's who' in America's dog world. However, although the competition was called 'Junior Showmanship and conducted within the Westminster Kennel Club from 1951, it was not until 1971 that the American Kennel Club (AKC) recognised and structured it. Only then were Junior Handler competitions granted official recognition at AKC events[2].

In England in 1977 when 'The Junior Handler of The Year' was held at Ascot Racecourse, in conjunction with the Richmond Championship Show, the Kennel Club (UK) first recognised it as an official activity. By then, the Royal Melbourne Show had been conducting Junior Handler's Classes under specific rules, for almost 30 years![3] 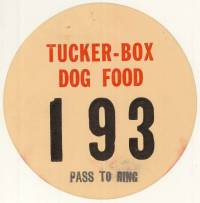 One of my Exhibit Numbers

By 1952, over 100 children were competing in our Junior Showmanship Classes at the Royal Melbourne Show. Then the first successful commercial Australian dog food 'Tucker Box' began manufacture in Australia. It sponsored the event naming it the 'Tuckerbox Canine Turnout (Juvenile Handlers' Classes)' which run annually under this name until 1981. We should be proud that this was a Melbourne initiative!