Quest for an Australian Stud Book 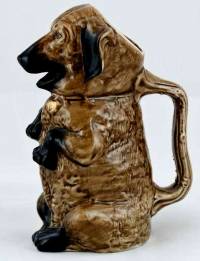 From 1862 when Australia's first dog shows was held, usually the breed, sex and age was listed. Dog enthusiasts could have never predicted how our modern dog world would develop. Today registrations, pedigree information and other data like breed characteristics defines our pure breed dogs. This is an outline of the growth from the scant information contained in those early catalogues, into the digital world we take for granted today.

What is a Stud Book?

A Stud Book collates the records of each individual dog that was usually catalogued at each individual Dog Show. Here is a page from the Bulldog Club of Victoria's Stud Book whose ledger of Bulldog registrations runs continuously from 1905 to 1945.The Queensland Bulldog Club also incorporated their stud records into in the Stud Books produced by the Kennel Association of Queensland. Consequently, Bulldogs are the only Australian breed that have enjoyed the benefits of Stud Books to keep records of dogs in the early days of pedigree registrations. This ledger, which today resides in the Dogs Victoria Library, demonstrates the amazing foresight of the Bulldog Club of Victoria.

This is an excellent example of what of a Stud Book should contain. Firstly each dog is given a Stud Book number. The next column lists the name and address of the owner, followed by the name and address of the breeder. The date of birth follows, then the sex (male or female) then the dog's  colour. The sire's (father's) name and dam's (mother's) name follows and the next column lists the four grandparents (if known). A 'Remarks' column follows which leaves room for other facts for example, the transfer of the dog to another owner or whether the dog had died when its entry was made in the Stud Book. What a pity that no other Breed Clubs, let alone Controlling body, has ever, to my knowledge produced a similar Stud Book in Australia.

Australia has never had a Dog Club or agricultural orientated publisher interested in producing a ledger containing the parentage of dogs entered in our early dog shows. However, from 1881, like England, the Victorian Poultry and Dog Society (VP&DS) demanded registration of every dog's name and it's parentage entered in our Shows. The catalogues that resulted gave Stud Book information. An example of one of these old catalogues is shown.

Here you can see that some entries, like 'Mac' number 109 and 'Floss' number 118 on the accompanying page did not state any parentage! This raises the question as to whether the breed assigned to them was merely guesswork as well, leaving our pure breed dog world wide open for unscrupulous dog traders to invent pedigrees that attracted big prices.

Consequently, although our structured compulsory registration system was in place, the permanent recording of these registrations in a Stud Book had to wait 145 years until the digital age!

In Pursuit of a Stud Book

1. In 1883 a £200 grant from the Government to produce a Stud Book with a further £200 from W Beilby to cover the cost of plant and expenses. Also, the question of who would compile a Kennel Club Stud Book was first discussed[1].

2. By 1888 around 1,500 dogs were registered and there was more agitation for a Stud Book. By Jan 5th 1889 the VP&DS again decided a Stud Book should be published at once financed by an overdraft. Because there was so much internal conflict within the VP&DS, some members were unaware of this[1].

3. By June, 1890 41 pedigree dogs had been imported. In 1892 the VP&DS produced a 'Code of Rules' for the Guidance of Dog Shows where dogs 'assumed and duly registered by the VP&DS with the owner, a distinguishing name and number' and the payment of one shilling[2].

4. In 1894 a unanimous decision was reached that the VP&DS must record pedigrees in an official Stud Book. But no Stud Book was produced[1].

5. In 1895, at a Kennel Conference in Sydney the issue of the Stud Book was again discussed but no decision was made[1].

6. In September 1895 that same year the VP&DS became the Victorian Poultry and Kennel Club (VP&KC), which still exists to this day. But because of the 1890's financial depression it was not until 1899 that the VP&KC became debt free and had a credit balance. Despite this, again no Stud Book was produced[1].

7. In 1904 NSW also attempted to produce a Stud Book but this was never published[1]. 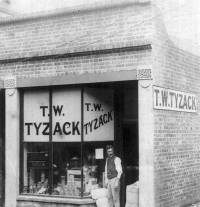 Mr Tyzack and his shop

In 1912 Mr Tyzack self-published the Annual which bears his name. Mr Tyzack, was basically a poultry man who, from 1890 also published the Australian Dog and Poultry Gazette fortnightly. He was a businessman who also owned a shop in central Melbourne distributing both dog and poultry supplies.

Tyzack's Annual was collated by a dog judge, Mr Clement Turner. He was assisted by a panel of 9 members, 6 from various affiliated Clubs and 3 from the VP&KC. 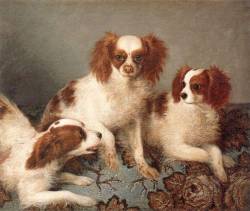 This panel oversaw this publication which supposedly sorted out the legitimate breeders from the rogues and vagabonds who faked pedigrees so their mongrel puppies could command higher prices!This first landmark Stud Book attempted to formalise registering dog (and poultry) pedigrees so accurate records could begin in Australia. Although this landmark publication was called Tyzack's Annual, because of World War One (1914-1918), there was never another one. 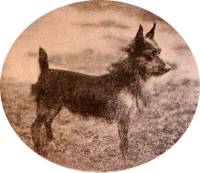 'The first Stud Book in Australia for dogs will mark a new era and will supply... under rigid registration the genealogical tree the boughs of which make what is called a pedigree.[2a]"

Within Tyzack's Annual, Mr Clement Turner also collated an amazing section called the 'Book of Chronicles' which charts the domestication of both poultry and dogs dating from 88 BC through more than the two millennia to 1911.

The Canine Stud Books of Australia 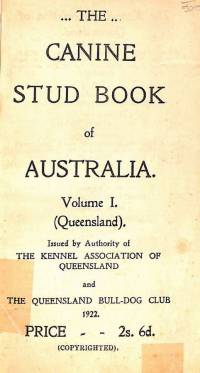 Production of the series, 'The Canine Stud Book of Australia' was our only attempt at an Australian Stud Book. Produced by the Kennel Association of Queensland from 1922 until 1945, it was published annually[2]. These books included the Queensland Bull-Dog Club's Stud Book. In 1945, 1946 and 1947 three more Year Books were then produced, with the registration numbers recommencing.

This series differed from its English counterpart in that registration was voluntary and not automatically taken from dog show catalogues. Additionally it appears that inclusion in these Stud Books was only available to Interstate dogs registered with the following bodies:

During this time, these and other the States were registering dogs' parentage under the different rules of two or three separate bodies. Although unclear whether registrations were accepted from bodies other than those stated, no other Australian Stud Book was ever attempted.