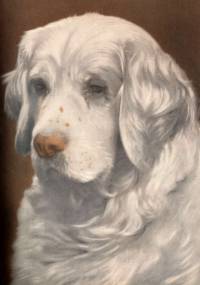 The Clumber and Sussex Spaniels are often considered together because both breeds are heavily built long, low Spaniels. Although both breeds worked by forcing their way through thick undergrowth, the Clumber worked silently while the Sussex sounds his voice when it finds game. At first glance, their most defining difference is their colour - the Clumber is always white while the Sussex is always a rich golden liver. Their other similarities and differences make an interesting comparison.

History of the Clumber Spaniel 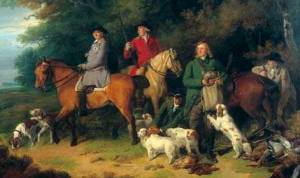 This large basically white Spaniel is descended from the Spaniels described in the History of Spaniels. He has been known since the late 1700's in Nottingham in Central England to find and retrieve game from heavy undergrowth in regenerated forests.

The Clumber Spaniel is confusingly not connected to the County of Cumberland which is much further north in England. Instead it was first developed in the centre of England by a family of gamekeepers for several Dukes of Newcastle, and named Clumber after the name of their property. Around the time two couples of Clumber Spaniels were featured in the rural hunting scene painting by Francis Wheatley in 1788, the breed began to receive acclaim[1].

Instead of using people to force their way through thick undergrowth to make the birds take flight or cause the rabbits or hare to run, the Clumber was kept for this purpose[5]. This low-set but sturdy spaniel with relatively short ears was unique because he worked silently or mute, with a steady, quiet style of hunting. Additionally, despite his short stature, his white coat could be easily seen through the undergrowth. So he began to be known throughout England long before the Spaniel Separation Saga began in the mid-1800's. His fame then spread through out England where they recognised this Spaniel for his specialised work in heavy undergrowth. Owned and bred by the Prince of Wales who then became King Edward VII became patron of the Kennel Club, the Clumber was the only Spaniel given a separate listing in the First English Stud book[6].

History of Clumber Spaniels in Australia 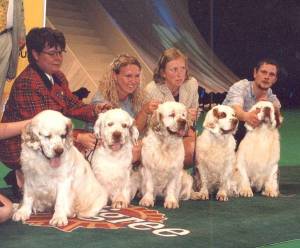 A Breeders' Group of Clumber Spaniels

In Australia there were seven imports between 1883 and 1904, two males 'Rattler' and 'Tricksey' bred by the Duke of Newcastle, Mr Connell followed in 1896 with a breeding pair and there was also an additional three. But only one progeny from all these dogs is recorded[2]. 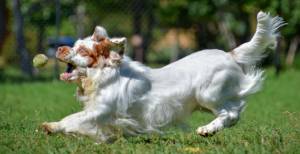 The Agility of a Clumber Spaniel

The breed then seemed to die out until 1954 when a working pair was imported. From this pair combined with a second import, the breed became re-established in Victoria. More imports arrived and some of the breed received top honours. Ever since, there has been a small but dedicated band of enthusiasts keeping the breed to the fore in Australia[1].

History of the Sussex Spaniel

In contrast the Sussex Spaniel was developed on the South coast of England to work the hedgerows of the open farmland. Said to have been kept pure for fifty years, in 1859 it was written:

"This (Sussex) Spaniel is much faster in his work than a Clumber, and more lasting, by which qualities he recommends himself to the general shooter....even a single dog will beat (force his way though) a great extent of covert, if he is a good one. He is gifted with a full bell-like tongue, which he varies according to the game before him; and by this means the experienced shooter can tell whether to expect "fur" or "feather" and can also distinguish a hot scent from a stale one"[5].

As the years rolled by, the Sussex became a victim of the Spaniel Separation Saga rather than remaining pure like the Clumber. This is confirmed by the First English Stud Book when he was included in the same category as the Cocker and Field Spaniels when all Spaniels that had the rich golden liver colour and long heavily feathered ears were called Sussex[4]. In these early days Sussex Spaniels had such short fore legs, they were allowed to have a slight bend[3] which some considered a defect. Today, the Breed Standard is silent on this point. The Sussex was not imported into Australia until 1985.

The Three Main Differences between the Sussex and the Field Spaniel 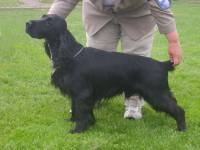 3. Head. In keeping with the above, the Sussex has a wide head with a moderate curve from ear to ear while the Field Spaniel has a much leaner head.

Comparison between the Clumber and Sussex Spaniels