Driver - A World War One Hero

Amongst the vast collection in the Australian War Memorial in Canberra is a small dog called 'Driver' whose hide is preserved by taxidermy. On his official dog tag he is inscribed as:

'Sydney Silky Terrier, mascot to the 7th Field Company, serving in Egypt and France in the 1st World War, smuggled back to Australia to be re-united with its master in Sydney'.

As their mascot, Driver became a member Australian Imperial Force (AIF), As their mascot, he is pictured wearing his official nickel-plated collar with two solid metal bands linked by double rows of chain link. The longer of the bands fastens with the metal peg. The shorter band bears a plate which is Driver's oval aluminium identity tag. Engraved, 'DRIVER 7 COY ENGRS AIF BORN 15/9/15', it is proof that Driver was an official of the 7th Field Company Engineer 7 COY and as such he was an official member of the Australian Imperial Force (AIF). It also shows Driver was born on 15 September 1915.

When Driver was just 12 weeks old, he was carried aboard the troop ship, 'Suffolk' in Fred Robert's pocket. Fred was one of four Australian Field Company Engineers who sailed for four months to France where they joined the transport section. There Fred gave the dog to Sergeant Leslie Ernest Ross and Driver became the mascot of the Australian Field Company. 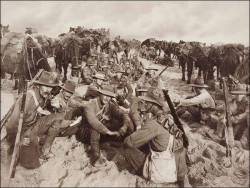 During the First World War, horses were an integral part of a complex horse supply line which provided the British forces on the Western Front with ammunition, food, and equipment. For the next couple of years, while the men were housed by the French villagers, Driver usually slept with the horses in the stables. The stables were whatever crude shelter the soldiers could provide. This was the safest option for this little World War One hero! Driver also liked to sit on his owner's feet, eating anything offered, but he particularly befriended the cook! Whenever the unit moved, Driver travelled in the officers' mess cart. He was often taken on ratting expeditions in the trenches, where he cleverly warned the Australian and allied troops when there were German Aircraft around.

In 1917 the Germans finally withdrew to the Hindenburg Line. Driver's unit was also moved there to fight. But during this dreadful battle, Driver went missing. He somehow found the unit and re-joined it two days later, footsore, and hungry. It is not known how he safely hid himself until the fighting ceased.

Driver Smuggled back to Australia

At the end of the war, against quarantine regulations, Driver was successfully smuggled back to England. Sergeant Ross then sneaked him onto the troop ship bound for Sydney. During the seven-week journey, when the ship's Captain and the officer commanding the troops (the CO) became aware of Driver's presence, they demanded that the dog be put down before the ship arrived in Australia. They even went as far as saying that the dog should be put into the ship's furnace! But the troops threatened to kill anyone who hurt Driver. With members of the ship's crew paid to hide him in their quarters, Driver somehow survived all inspections. 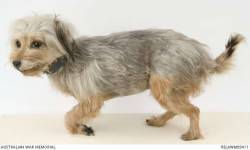 As the troops knew that that customs officials would be waiting for Sergeant Ross when the ship docked in Sydney, a volunteer was found to smuggle the dog off the ship in Melbourne. The volunteer was provided with a kit bag cut up to make a pocket to fit neatly inside his army greatcoat. When the volunteer disembarked, he carried the coat over his arm and laid it on the pier for the 20-minute kit inspection. During this time, Driver never moved a muscle. Driver was then then forwarded back to Sydney by rail where he lived the rest of his life with the Sergeant's father.

The material in this story was originally found on the Australian War Memorial website.

Additional material supplied by by Anthony Hill in his book entitled 'Animal Heroes'  'Mascots who went to War' Driver, the puppy who went to war Pages 32 - 36