An ancient Italian medium-sized water dog, the Lagotto is a very ancient breed. Developed in Italy in one of the earliest cradles of civilization, perhaps he was in the background of many ancient Water Dogs like those described by Gervase Markham in his book 'La Livre de Chasse' (published 1655 AD). By the mid-1800's the Lagotto was used almost exclusively for truffle hunting. The truffle is a type of fungus (or mushroom) found on the roots of some trees and is regarded by gourmet chefs as a delicacy.

History of the Lagotto

The Lagotto arguably the oldest water dog, first developed from an ancient type of shaggy haired Spaniel-type dog, possibly dating back as early 4 or 5 BC (Centuries Before Christ) when the Italian Peninsula was, together with Greece, one of the earliest cradles of civilisation.

The historical reasons are based on the assumption that the Italian Peninsula was, together with Greece, one of the earliest cradles of the Mediterranean and world-wide civilisation. Since very ancient times Italic peoples had flourishing trade relations with Eastern peoples. Said relations entailed ongoing contacts at every level that allowed each population to become familiar with extremely differing habits and mores (customs) that could be spread only in this way. Surely this also applied to dogs. This explains the many findings, (especially during archaeological excavation North Eastern Italy) concerning various breeds of dogs, and in particular a curly and shaggy-haired small-sized water dog.[2] 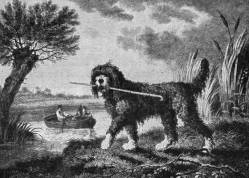 Before the 16th Century in Nothern Italy, there were the flat lowlands of Comacchio and marshlands of Ravenna. Later these marshlands spread over the hills and lowland plains of Romagna. This is an area which today is on the Adriatic Sea just South of Venice. Certainly there were shaggy-haired small-sized water dogs the colour of reeds called 'Canis Aquaticus' mentioned by Linneus, the great Swedish Naturalist of the 1700's, that had hunted in these marshland areas for hundreds of years. Even the British source Vero Shaw published in 1872 mentions the Lagotto as 'a bad sort of Poodle under the designation of Truffle-Dog'[1]. 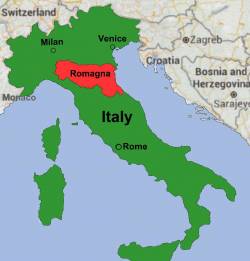 In the local dialect of the Romagna "Càn Lagòt" is synonymous with "water dog" or "wetland hunting dog with a crimped, curly coat". Because the people who hunted the area of Romagna when it was rich in game were called 'logotti' (inhabitants of flat marshland), this dog was named 'Lagotto'. The Lagotto would, often for hours on end, dive into the water whatever the season, even breaking through ice to swim under it and drag the fallen birds back onto the shore. This activity was made possible by the dogs' compactly crimped coat and thick undercoat which forms a water-repellent layer that keeps the water off the dogs' skin as well as making it easy for the dog to shake off any excess water.


By the mid-1800's reclamation work had reduced the huge marshes of Comacchio and Romagna. So the Lagotto's purpose as a water dog became redundant. But because he was so easily trained and had such a wonderful sense of smell, Lagottos were then famously used to hunt truffles. These are a fungus which have a distinctive taste and are considered to be a delicacy. But truffles live within the roots of certain trees like beech, poplar and oak, making them difficult to find.

The accompanying footage was shot in Milan, Italy at the World Dog Show 2000. This was after 30 years of dedicated resurrection by a passionate band of cynologists, breeders, judges and the Italian Lagotto Club. He became the FCI recognized breed we know today in 1999[2]. He is also newcomer to Australia, gaining recognition here in the year 2,000. 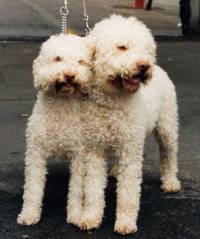 Although the skin is described as fine or thin without wrinkles, the unique waterproof coat is of woolly texture with curls forming the topcoat with a woolly undercoat. The curls should never be twisted to form thin cords. Instead it has tight, ring shaped curls evenly distributed over all the body and tail, with visible undercoat. But the curls on the head and cheeks are not as tight forming abundant eyebrows, whiskers and beard. 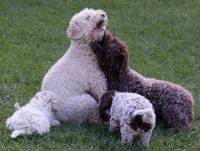 The coat is clipped to a maximum of 4 cms (1.5 inches), but on the head it can be longer. The coat should never be clipped short preventing it from curling or assessment of texture, nor may it be brushed up in the fashion of the Poodles and Bichon Frisé breeds. The correct clip is unpretentious and contributes to accentuate the natural, rustic appearance complimented by the coat colour. This may be be off-white as a solid colour, white with brown or orange patches, brown roan, brown (in different shades) with or without white or orange with or without white. Some dogs have a brown to dark brown mask. Tan markings (in different shades) are allowed. 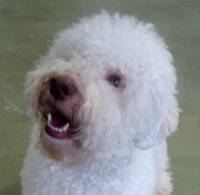 The skull is as broad is it is long, with flat cheeks and well defined eyebrows and a pronounced furrow running up the forehead from a slight but definite stop. The length of the skull is slightly longer than the muzzle which has a straight profile but diverges slightly from the plane of the skull. In other words, it is slightly 'down-faced'. However, the strong muzzle is as deep as it is long, is covered with a long and rather bristly moustache and houses a normal scissors bite. The nose has wide open mobile nostrils, lips, eyes and eyelids and can be light to dark brown, depending on the coat colour. The eyes are large and round and the ears are triangular with rounded tips, set in line with the eyes and covered with looser curls. 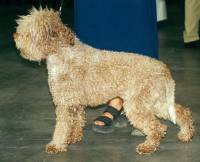 The neck is strong, muscular, and free from dewlap. The shoulder blades are well laid back, long and muscular and the same length as the upper arm. The elbow joint situated close to the chest wall. The forelegs have strong bone and are perfectly vertical, with resilient pasterns. The feet are slightly rounded, with webbing between the toes.

In profile the withers which at their highest point are not too close, rise above the level of the croup. The body is strong compact and the same length as the height at withers. The topline is straight and muscular from withers to croup and the loin is short coupled, as wide as it long, and very strong. The chest is well developed, reaching the elbows. Although the chest looks fairly narrow from the front, the ribcage it widens behind the elbows making the underline fairly straight with only a slight tuck-up.

From the rear, the hindquarters should look powerful and in proportion to the size of the dog, with long thighs and clearly defined muscles. The lower thigh should be slightly longer than the upper thigh with the stifle well turned and the hocks perpendicular to the ground with no dewclaws. The tail is set on line with the topline and when at rest, should barely reach the hocks. At rest it is carried in scimitar like curve, but when attentive it should be decidedly raised. When working or excited can be carried over the back, but never curled. He moves with a regular, energetic and brisk trot but can gallop for short periods.