The Airedale Terrier Club's (ATC) first fixture was a member's parade at Towart Lodge, Toorak on the 15th March 1930, with about 30 entries for judge Mr. J S Rowles. There were three controlling bodies in Victoria at that time, and the Airedale Club opted to affiliate with the CCC, the forerunner of the KCC and that affiliation continues to this day.

In 1931 the Club combined with The Alsatian League and the Sporting Dog Club to hold its Championship Show, but by 1932 it held its own, catering for all breeds of Terriers, with the secretary being offered free entries for his own dogs at this Show!

Veterinary Surgeon, Mr. Norman Meyers was the inaugural President of the Club, succeeded by Mr. Neville Whiting. Both these gentlemen were well-known in the breed, and both imported dogs.

Along with its inauguration, the Airedale Terrier Club of Victoria published the breed standard below. The Club at first was huge. One report states around 100 people came to their Annual Dinner Dance with a live orchestra playing, held at the Victoria Coffee Palace on 19th December 1934. Toasts were proposed to, among others, the health of the Championship Show judge Mr Frank Rowles. The dinner menu appears below: 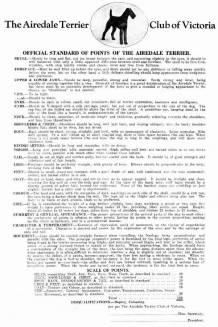 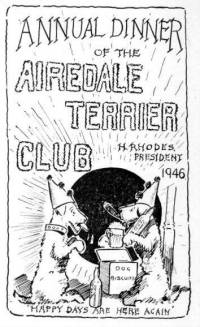 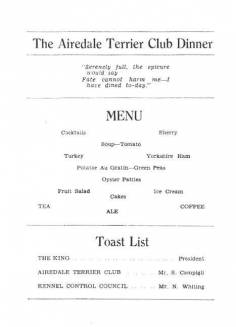 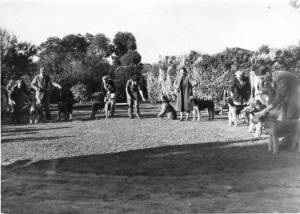 I do not have any information about this photo but I would think it may be post World War 2. I recognize Mrs Greta Krejci (Sirius Kennels) 5th from the left standing next to May Platts. Next to May Platts was probably Betty Platts and the partially obscured gentleman next to her in the hat most likely would have been Maurie Platts, May's husband. The gentleman leaning over his dog 3rd from the left could be Snowy Rhodes with his first wife, Ruby holding the next dog that is sitting.

The gentleman standing with the dog 2nd from the left looks remarkably like how I remember the famous Fox Terrier man Cam Milward at that time. Although I do not recall Cam having any direct connection with Airedales in these early times or with the ATC, in his own book[1] Cam documents a friendship with Neville Whiting. Perhaps he attended this particular function and posed for this photo. We would appreciate any information anyone else can provide about this photo and the people it contains.

Below are the three most significant perpetual trophies that were competed for an an annual basis held by the Airedale Terrier Club of Victoria. There were all initiated in the 1930's.

This was for the most successful Australian bred Airedale Terrier. The original shield, dating back to 1931 remained (and still does) the property of the Airedale Terrier Club of Victoria and was competed for until the year 2,000. The winner was presented with a small individual plaque to keep at its Annual General Meeting. Decided by the highest number of points in a Club year at Championship Shows held under the Rules of the KCC of Victoria within the Melbourne Metropolitan area, the winner had his or her name engraved on a small silver plaque on the shield itself. As there was insufficient room left on the original shield for the number of years for which it was completed, a second replica shield was made. 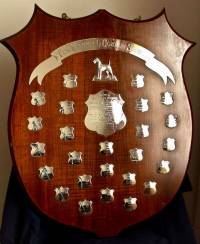 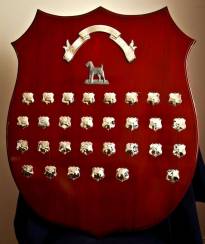 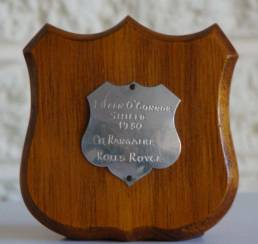 The FM Mitchell Cup and the Renown Marquis Memorial Tray 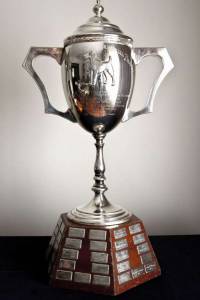 The Cup was probably donated by Judge Mitchell from the Mitchell family, this magnificent cup standing around two feet high, was awarded for the most successful exhibitor of Airedale Terriers in puppy classes. It was first competed for from 1933 to the year 2,000 and remains the property of the Airedale Terrier Club of Victoria. 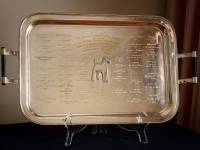 The Tray was named after Neville Whiting's famous imported dog, this tray was awarded to the most successful exhibitor of Airedale Terriers at Championship Shows held under the Rules of the KCC within the Melbourne Metropolitan area. This was competed for from 1936 until the year 2,000 and remains the property of the Airedale Terrier Club of Victoria.