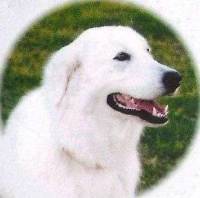 The Maremma Sheepdog is a traditional Livestock Guardian Dog currently being adapted to protect Australia's native wildlife species in a world-first programme. He originates in the more southern part of Italian Peninsula than the other Italian Livestock Guardian breed, the Bergamasco. Additionally he only comes in white and his coat at around 8 cm or 3 inches, is relatively short.

History of the Maremma

Italian Shepherds have long used Livestock Guardian Dogs, and still do today. Around 2,000 years ago, the Romans had sheepdogs which could have first arrived in Europe following the migration of peoples from Asia or were introduced into Europe during the Roman conquests[1]. When the people settled, the practice of transhumance began and the flocks grazed in the mountains in the summer and travelled to the plains of the Adriatic coast for the winter.

Sheep farming is the main income for the people of Naples in the Southern part of the Italian Peninsula where the Shepherd Dog of Abruzzi is indispensable. So the forerunners of Maremma Sheepdogs passed through the centuries retaining the image of 'white sheepdogs' described by Marco Terenzio Varrone (116 - 27 BC) and glorified by Lucio Guinio Columella (4 - 70 AD) as trustworthy guardians of flocks and effective adversaries of bears and wolves[2].

The Maremma Sheepdog occupied two separate locations in Italy, the Abruzzi region of the Apennine Mountains in the summer and the plains of Maremma in the winter. So the two names Maremmano and Abruzzese which could well have been the same breed are still known in Italy today as the Cane da Pastore Maremmano-Abruzzese. But to the rest of the world it is known simply as the Maremma Sheepdog. The modern Maremma was promoted as a pure breed by Donna Anna Corsini who, together with Francesco Guintini established the breed we know today so that, at a dog show in Brescia in 1952 the breed was first displayed[2].

His temperament is typical of a courageous Livestock Guardian Dog and must always be respected despite his outwardly dignified deportment. The Breed Standard describes his courage and suspicious nature in defence of his herds as well as the property and home of his master. Typical of a Livestock Guardian Dog, he attacks silently if necessary, regarding his territory as his own property and will not tolerate any other living creature in it. During the day, he likes to keep a lying position enabling him to control his area. At night, he is always on the move.

History of Maremmas in Australia 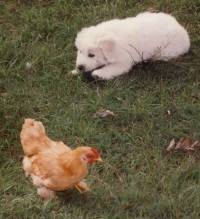 The Maremma Sheepdog was first introduced into Australia in 1982 and has become quite popular, not only for its traditional use as a Livestock Guardian when bonded with domestic animals like sheep, goats, horses and alpacas, but also when bonded with domestic birds, particularly chooks (chickens) and turkeys. This bonding takes place from a very young age, with pups as young as 8 weeks being put with the species they will be required to protect when they become adults. 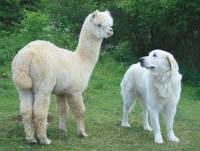 Maremma with an alpaca

As a Maremma matures, its reasoning capability becomes evident. It instinctively develops the ability to size up a situation without interference or direction from its owner. But at the same time, it expects its owner to come should it signal something is wrong. Correspondence with one Maremma owner revealed that her dog would stay with the sheep while they were lambing but reliably bark to warn the owner if a ewe needed help. When 'on duty' it seemed to sleep with its eyes half open - like a 'cat nap'. After the lambing season was over, this particular Maremma would revert to being a house dog for a long deep sleep.

So if you wish Maremma to work in their traditional role, it is important to either have more than one Maremma and rotate them, or take them away from their charges for 'respite' as is done in the programme outlined below.

Its prowess with domestic birds provided the ground breaking initiative for a world-first Australian programme where these wonderful dogs could be bonded with the naturally occurring birds that make up Australia's unique indigenous bird species. Our story 'Big Dogs Save Little Penguins' highlights Australia's pioneering programme that uses Maremma Sheepdogs to keep particular species of bird wildlife safe from predators. 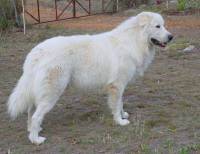 The large head has a wide flat skull with rounded sides which gives it a conical shape when viewed from the front. From the side the head planes are slightly divergent rather than parallel. When considering this side view of the skull using a theoretical anatomical diagram, the strong muzzle is only slightly shorter in length than the skull. The outline of this conical shaped head is completed by eyebrows which are moderately arched with a slight stop or medial furrow between them. The foreface or muzzle has black nose that must not protrude beyond the front margin of the tight black lips which barely cover the teeth which meet in a normal scissors bite. The eyes and ears should balance the head. The eyes are almond shaped and also have tight black rims. The ears are set high are of medium width and hang to form a narrow 'V'.

The neck is shorter in length than the head, but is strong and muscular, without dewlap and covered with long, dense hair which is particularly obvious in males.

Like many breeds of European origin, there are several measurements given in the breed standard of the forequarters, hindquarters and body of the Maremma. But the following basic description is purposely in a similar format to that of other breeds on this website and serious students of the Maremma should also refer to the measurements within the actual breed standard.

The shoulder blades are visible a little above the topline and set wide apart to accommodate the body between them. They are well laid forming a normal angle with the humerus or upper arm. This upper arm is of sufficient length to allow the elbows to work free of the ribcage and to place the forelegs directly underneath the withers or top of the shoulder blades when the dog is standing. The forelegs are straight, vertical and strongly boned without being mastiff like. The pasterns are strong and slope to give sufficient resilience to act as the dog's shock absorbers. The feet are large and round and covered with tight skin and thick hair, the pads and nails being preferably black.

Maremma on the move

The body is slightly longer than high with the topline straight but the croup slopes towards the low set tail. The underline of the chest comes at least to the elbows with some forechest in front of the forelegs and a slight tuck up behind them, the ribcage giving the dog's body a well-rounded appearance throughout.

The hindquarters are strong and muscular with normal angulation. Again all the required measurements are stated in the breed standard in explicit detail. It is interesting to note that in contrast to the requirement of hind dewclaws of the Pyrenean Mountain Dog and other Livestock Guardian Dogs, the Maremma's Breed Standard states that if dewclaws if present, they must be removed.

The low set tail is covered with thick dense hair but no fringes. When the dog is standing the tail hangs down. But when the dog walks or moves, its extended trot with balanced reach and drive, the true carriage of the tail becomes evident. On the move, the tail becomes an extension of the topline and that strongly hooked tip typical of so many of the Livestock Guardian Dogs should be then clearly seen.

His rather thick skin should be tight especially on the head and neck. The basically white coat is around 8 cms or 3 inches long and lies preferably flat with undercoat present in winter. Typically the coat is short on the head, ears and front of the limbs but there is usually an abundant collar around the neck and some feathering on the hindquarters.