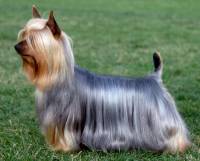 Originally developed from a mixture between the Rough Coated Terrier, the Dandie Dinmont and Yorkshire Terrier, the Australian Silky Terrier began to evolve a century and a half ago. Later it became split again into two separate breeds and then split again, developing in two separate cities situated some 900 km apart. Such were the mix-ups that produced the only toy breed indigenous to Australia.

History of the Australian Silky Terrier 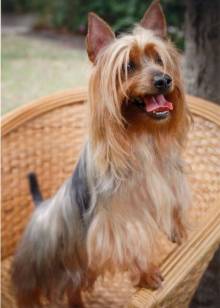 There is always some difficulty in deciding the awards for the popular small terrier which some people call the Australian Terrier which is, in reality neither Scotch, Skye or Yorkie but a well regulated mixture of these breeds eminently suitable for Australian climates and work.

Of these there are two distinct kinds, one more suitable for country and field work, while the other is specially adapted to become the pet of the children of the household.

These are differentiated particularly by their coats, which the former is required to be wire-haired, or broken haired i.e very coarse and thick, while in the case of the household pet, it is better to be silky and soft to touch, and above all, easy to be thoroughly washed and dried'[10].

One Breed Splits into Two 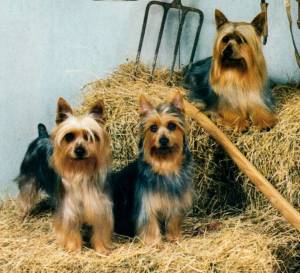 In other words, by 1896 it had become evident that, in Australia two distinctly different types of coat had evolved on Rough Coated Terriers. As stated above, it seemed logical that these two breeds would become differentiated by their coat texture.

By the beginning of the 1900s with no Breed Standards to guide them, it was reported:

'... there seems to be no settled practice in making awards, for some judges disregarded the texture of the coat while others seem to consider it of the utmost importance, and send from the ring, as the case may be, either the rough or the silky contestants. The same dogs have met in the past under different judges, and with ludicrously varied results'.[10]

The two different breeds were to become:

The Australian Terrier which was produced when the rough haired coat of the Scotch was mixed with the coat of the Dandie Dinmont, a soft, silky topknot was produced on a rough coated terrier. The rough coat protected the terrier from the vermin it was required to hunt while the topknot and the associated ruff around his neck, protected the terrier by acting as a decoy for vermin, particularly snakes. This became the a breed that was particularly useful for field work. We still know it today as the Australian Terrier.

'A Tale of Two Cities' 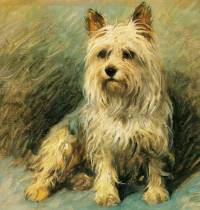 However confusingly, the Australian Silky Terrier we know today also evolved separately again in Sydney and Melbourne. These two cities are the capitals of two separately governed Australian States situated some 900 kilometres apart connected at that time, only by a rough gravel road. Hence, with two different Breed Standards, its development could well be called "A Tale of Two Cities".

One excellent description in 1912 was:

"Its sire was Australian; component parts were many -
Yorkshire, black and tan, and Scotch - it proved much worse than any.
Another dash of Yorkshire; the result was far more pretty;
They called it 'Sydney' Silky but quarrelled o'er the city"[4a] 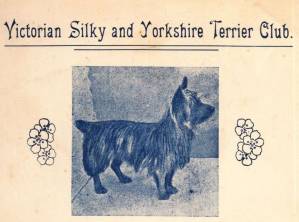 In Melbourne, The first Breed Standard of 'the Silky Terrier' was approved by the Victorian Poultry and Kennel Club in 1904. Written by the Victorian Silky and Yorkshire Club, it followed the example set by the English Yorkshire Terrier Club. There were two weight divisions, those under 6 pounds and those from 6 and up to 12 pounds. Both pricked and dropped ears were allowable.

In 1909 the Victorian Silky and Yorkshire Club held its first Show. In 1912, when Tyzack's Annual was published by the Victorian Poultry and Kennel Club, it listed 22 Silky Terriers (Victorian) without designating the weight of any of them[4a]. These were simply called 'Silky Terriers' in Victorian Shows until 1958. 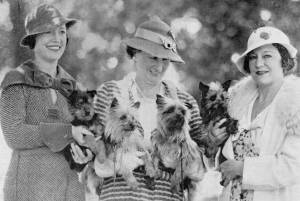 Simultaneously in Sydney, New South Wales (NSW), in 1891 the Royal Agricultural Show had classes for 'Terrier, any other Variety'.  From 1901-1906 the name of these classes was 'Terrier Soft and Silky'. When the NSW Breed Standard was set up by the  Kennel Association around 1907, the breed was named 'Terrier, Sydney Silky'.

In contrast to Victoria's 'Silky Terrier', the Sydney Silky had only one allowable weight - from 6 to under 12 pounds. They also only allowed pricked ears[9]. In the 1930's the 'Sydney Silky' also made its identity known overseas, particularly in India where it resided with British diplomats[7]. 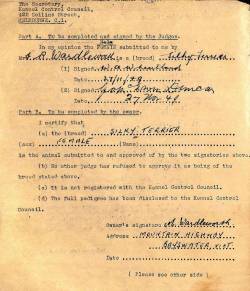 In Victoria until 1934, Silky Terriers was a bi-product of crossing Australian and Yorkshire Terriers. When this became prohibited, litters produced by this cross could still be registered if the pups were physically examined by two qualified judges. However, registration required a Certificate like accompanying one, to be presented to the Victorian Kennel Control Council (KCC).

In 1950 the Victorian Kennel Control Council (KCC) produced a Breed Standard for the Australian Silky Terrier encompassing all the salient features of both the NSW and Victorian Breed Standards. In March 1959 after the ANKC was formed, this revised Breed Standard was adopted and the breed name adopted. In every State, a panel of judges physically examined every pup from any crossed breed litters before registration as an Australian Silky Terrier could be accepted[2].

By 1972 the Australian Silky Terrier was taking its rightful place alongside other recognised ANKC breeds. This was demonstrated when Ch Dulcannina Kansas owned and bred by Mrs Sybil Camac of South Australia and handled by her son James, won Best Exhibit in Show at the Royal Melbourne Show, Australia's largest dog show at that time. Please click on the accompanying video clip.