Named after the Canadian Island of Newfoundland where he was first developed, this giant breed is capable of swimming strongly in the sea, hauling loads on land as well as being a gentle companion. Immortalised in numerous works of art by famous painters, in literature by poets and writers especially through the 1800's, today's Newfoundland is essentially unchanged.

Logistics of Newfoundland and Labrador 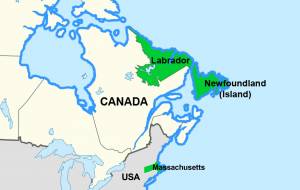 The Island of Newfoundland is situated off the east coast of Canada. But the Province is called Newfoundland and Labrador, the latter being the nearby coastal district to the north-west of the island. From these two areas, today we have the names of the two breeds of dog which were not indigenous to either of these areas. Instead both the Labrador Retriever and the Newfoundland are products of European settlement.

Historically this Province had no indigenous dogs. The Maritime Archaic Indians who occupied these lands some 9,000 years ago relied on fish and seals to provide them with the food and shelter they needed. Over the next few centuries, these early Indians were replaced by two separate tribes of people, the Inuits who occupied what is now the Province of Labrador and Beothuks who occupied Newfoundland. 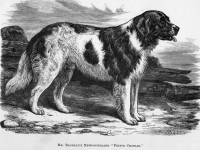 Archaeological evidence proves they lived in a traditional way on a diet of fish and harp seal which provided fur, meat, and bones utilised for food, clothing, and shelter without the need for dogs to assist them with with hunting or sledding or any other purpose[2]. 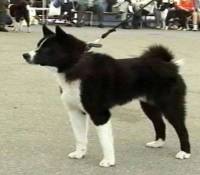 But in 1001 AD when the Vikings explored this east coast of the North American continent, they settled in the USA State of Massachusetts. It appears most likely that they would have brought hunting dogs with them, similar to today's Karalien Bear Dog (FCI 48 pictured).

Over the next few centuries English dogs were also brought into Canada because of the development of the fishing trade. By that time the Vikings would have explored the coastline further. So it seems likely that not only would these large black dogs have already been bred in America, this type of dog and its descendants would have influenced the size and coat type we see in today's Newfoundland[1].

History of the Newfoundland

In 1497 John Cabot discovered what is now called Newfoundland and claimed it for Henry V11 of England, bringing back stories about the amazing abundance of fish. Over the next century, a British colony was established, relying on the fishing industry. The dogs they brought with them became well known because they had learned to swim, negotiating the rough seas to catch fish that got away often delivering them to hand. They also assisted sailors that fell overboard and towed ropes from boats to the anchoring points. Together with hauling cart loads of fish and other goods from one place to another, these dogs became vital to the flourishing fishing industry that was developing in Canada's Province of Newfoundland and Labrador.

The Newfoundland becomes a Pure Breed

So this Province is responsible for the origin of developing two distinctly different dog breeds from dogs originally brought to North America by the Vikings and early British settlers. At first both breeds were known as Newfoundlands, still the name of this heavier breed today. But the smaller dog became known by three different names, the lesser Newfoundland, the St John's dog and the Labrador Retriever.

After areas of Canada were cleared for sheep farming, in 1885 a law was introduced in the Province which saw the destruction of many dogs. Simultaneously, quarantine laws came into force in England. This ended the random trade in dogs between Canada and England. But by this time the Newfoundland had become well established on both sides of the Atlantic Ocean. He was one of the breeds to be listed in the first Kennel Club (UK) Stud Book.

Development of the Newfoundland and Landseer

In 1639 AD a large, predominately black woolly dog was first described in America[1d]. About 1775 AD this dog was named Newfoundland by George Cartwright after the Island where he had become popular[1e]. Many stories of heroism and intelligence followed for which this dog then became renowned in America and in the destinations of sailing ships.

In England he became the subject of many works of art and various writings about prowess in rescue, hunting, carting and as well as being a faithful companion. For example in 1808 AD the famous verse below was penned by English poet Lord Byron[1b]. Then in 1838 AD the artist Sir Edwin Landseer in his famous painting also reproduced below, named him as "Distinguished Member of the Humane Society"[3].

The Newfoundland becomes a Pure Breed

As Landseer's paintings always depicted black and white Newfoundlands, those specimens with white markings became known as Landseers, a name which they are still called today[1c]. As the Newfoundland appeared in Birmingham Show of 1860, he appeared in the First English Stud Book. 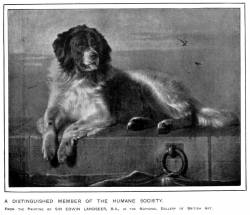 Near this spot
Are deposited the remains of one
Who possessed beauty without vanity
Strength without insolence
Courage without ferocity
And all the virtues of man without his vices.

This praise which would be
Unmeaning flattery if inscribed over human ashes
Is just a tribute to the memory of
Boatswain, a dog
Who was born at Newfoundland, May 1803,
And died at Newstead Abbey
November 18, 1808 [1b]

History of Newfoundlands in Australia 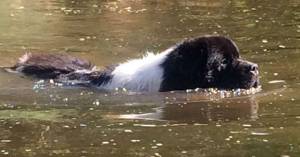 "Hector", the first Newfoundland to land in Australia belonged to John Marshall, the captain of the "Scarborough" one of the eleven ships that made up the First Fleet that arrived here from England in 1788[4]. As it was the usual practice for ships to carry a giant sea rescue dog like a Newfoundland on these long voyagers, we can only assume this was the reason so many Newfoundlands were found here in the early 1800's. Unfortunately there were no formal registration records kept until the early 1900's. 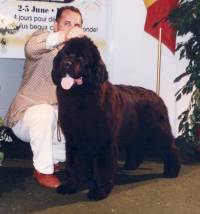 At the First Dog Show held in Melbourne in 1864 listed 22 Newfoundlands, large breed[5] and entries were also recorded at another Show held in 1871[7]. A further 11 are listed as being imported from 1869 to 1893[6] but despite the St Bernard, Mastiff and Newfoundland Club being formed in 1891, none appeared in this first Stud Book[7].

None then seemed to be bred Maybe until 1938 when Dr Murray of Melbourne advertised the West Felton Kennel as "The only Kennel of Newfoundlands in Australia"[8]. But in the mid-1960's John Hughes from Bourke NSW brought 3 imports into Australia and these founded the Majesty Kennels. In Victoria Don and Mary McCaul imported a bitch and bred under the Marydon prefix and was instrumental in encouraging others like Meg and Roy Simpson to re-establish the breed in Victoria[4]. From the 1970's Newfoundlands grew from strength to strength with barely a major Show being held here ever since without representation of these magnificent dogs. 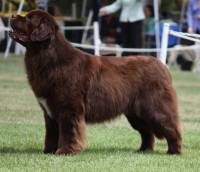 The gentle Newfoundland is a giant breed with massive bone, a deep body but well muscled and coordinated. He stands 71 cms (28 ins) for a dog, 66 cms (26 ins) for a bitch and weighs 63.5-68 kgs (140-150 lbs) for a dog and 50-54.5 kgs (110-120 lbs) for a bitch. His oily double coat comes in dull jet black with a tinge of bronze, brown which is chocolate both with or without a splash of white on the chest and toes, or evenly marked black and white which is called a Landseer. 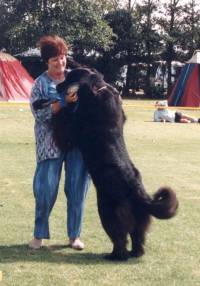 The head should be broad and massive with a slightly arched skull with prominent brows over the eyes giving the impression that the sloping stop looks steeper when viewed in profile than a closer examination reveals. The muzzle should be no longer than the skull and should be very strong with square flews which should never be excessive. The mouth has a normal scissors bite but a level bite is also acceptable. The eyes should be small considering the size of the head and as dark as possible with tight fitting eyelids showing no haw. The ears and small blending into and lying close to the head so they protect the orifice of the ear when the dog is swimming. 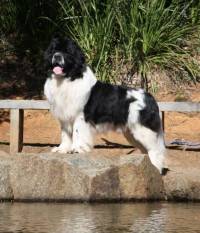 The neck must be strong so the dog can carry large objects but of sufficient length for a proud head carriage. The shoulder blades should be well muscled and broad and of approximately the same length as the humerus or forearms. The forelegs should be perfectly straight with plenty of bone but have some resilience in the pasterns. The feet are large but the toes are firm and compact with webbing between them. The chest should be deep, well covered with hair but not forming a frill, and the ribcage oval in shape. The back is broad with the topline as straight possible to the slightly sloping croup. The tail should hang downwards with just a slight curve at the end but on the move the dog may elevate the tail to slightly above the horizontal. He moves freely with his body swung between his legs which could give the impression of a slight roll, especially at slower speeds.

[1b] Ibid., Chapter 3 The Newfoundland in Art, Literature, Lore, and Legend Page 88

[4] Frances Wilson, "The History of Purebred Dogs in Australia" The Newfoundland published by OzDog Newspaper 1997 Page 229

[5] Catalogue of the First Exhibition of Sporting & Other Dogs, Thursday & Friday April 7 & 8, 1864 promoted by the Council of the Acclimatisation Society, printed in Melbourne by Mason & Firth, Printers, Flinders Lane West Pages 11-12

[7] W. Beilby 'The Dog in Australasia' published George Robertson & Company in 1897 Chapter on The Newfoundland Page 200

[8] The 1938 Annual "Dogs on the Bench and in the Field" published by the Kennel Control Council Temple Court Collins Street, Melbourne Page 45