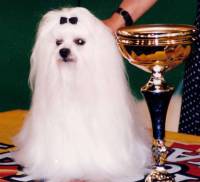 Many toy breeds descend from the forerunners of the Maltese which have been adored continuously as a small companion dog since the earliest civilizations. Their development demonstrates the effect of trading small dogs between the East and the West. Maltese history is summarized here, together with documentation from many respected sources.

History of the Maltese 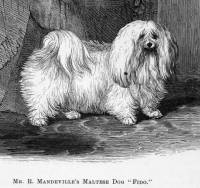 Below is some of the documentation that supports the theory that the type of dog known today as a Maltese, dates continuously back to Aristotle's time (384 BC -322 BC) making it one of the the oldest of the 'Toy' breeds. Without DNA and the pedigree authentication available today, here is some early documentation[1]:

The Maltese becomes a Pure Breed 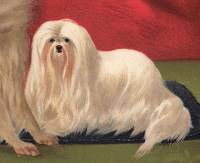 As Maltese were entered in the first dog Show held in England in 1859, 24 are listed in the First English Stud Book, including Lady Giffard's "Hugh" (pictured). It is interesting to note that from 1859 to 1951, 2,769 Maltese had been registered in these English Stud Books[1a]. As this period spanned both World Wars when records of so many breeds were destroyed or otherwise lost, the Maltese is one of the very few of today's pure breeds whose records are continuous.

History of Maltese in Australia

Two 'Maltese Spaniels', an unnamed bitch was imported in 1893 followed by a dog in 1907[2]. No further reliable records of Maltese arriving here could be found until 1949 when Mrs De Pellette arrived in Western Australia with five Maltese. Three of these were Eng Ch Invicta Accius, Invicta Puffin and Whiteinch Tom-Tit who was from parents carrying the 'Invicta' prefix, plus two other Maltese. These founded the Maltese breed as we know it across Australia and New Zealand today[3]. The attached footage was shot in the early 1970's by Bill Dalzeil, husband of the former Trudy Pamment who was very successful in Maltese during this period. It is interesting to note not only how the dogs have changed, the Royal Melbourne Showgrounds has long gone, and card tables have been replaced by secure judging tables! 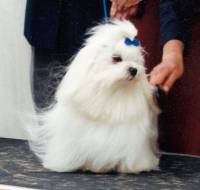 The Maltese is a pure white dog standing around 10 inches (25 centimetres) high. It's crowning glory has always been its white long, perfectly straight coat which should never be woolly. Nor should it be so long that it impedes the dog's straight and free-flowing movement.

The head should impart a sweet tempered and intelligent expression. When looking at the head from the front, a line drawn from the back of the skull to the stop should be double the length of the muzzle. The stop should be well defined and the nose and eye-rims should be pure black.The dark brown eyes should be oval and not bulging. The ears should be long and well feathered and hang close to the side of the head. The hair on the ears should mingle with the coat on the shoulders. The Maltese should have a normal scissors bite or a level bite with even teeth.

The neck is of medium length, the shoulders are well sloped and the legs should be short and straight. The short, cobby body should be well balanced with a good spring of rib, creating a straight topline from the tip of the shoulders to the well feathered tail which is arched over the back. The feet should be round with black pads. The gait should be straight and free-flowing without weaving in the front but when viewed from the rear the legs should be neither too close nor too wide apart.

With an origin closely connected to the Maltese, the Bolognese was only recognized by the FCI in late 2015[4]. He can stand almost 12 inches (30 cms) high so he is generally a taller dog than the Maltese and more squarely built. The head is also proportionately a little longer. But the major difference is the coat which forms long flocks that should have the same texture all over the body. This is a  rather off-standing coat which does not not fall flat and tight.