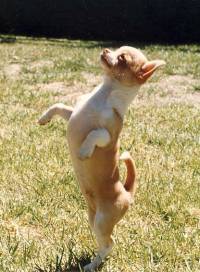 The Chihuahua is famous as one of the smallest dog breeds in the world. Typified by not only his diminutive size, but also his rounded skull with the molera or hole in the skull like the fontanelle in human babies. His large round eye, curious bird-like feet with long curving nails, and flat tail all contribute to the unique look of the Chihuahua.

History of the Chihuahua

The Chihuahua, the 'Royal Miniature of Dogdom' derives its name from the Northernmost State in Mexico, bordering on the USA. It is commonly believed his immediate ancestor was the Techichi which, for many centuries was the beloved pet and companion of the Toltecs of Mexico and an essential part of their religious rites. These Chihuahua-like Techichis were buried with people believing this little dog would carry its masters' souls across the nine dangerous rivers to the underworld[2a]. The Toltecs preceded the Aztecs who were in turn overthrown by the Spanish Conquistadors who conquered Mexico in 1521 and brought the first Chihuahuas to Europe[2]. 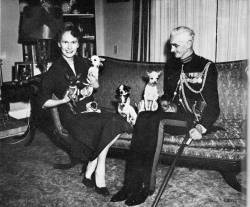 Hilary Harmar and husband with their Chihuahuas in Mexico pre-1955

Englishwoman, Hilary Harmar spent several years in Mexico when her husband was working there as a Military Attaché for the two decades after World War Two. She personally researched the history of the Chihuahua. After visiting various Central American countries, she came to the conclusion that the most creditable theory is that Chihuahuas came from a small ancient Indian village in the State of Chihuahua, called Valle de Allende. In the absence of any concrete proof, apart from a few carvings and figurines, she relied on the oldest Indians remembering their ancestors keeping these small dogs in this village for hundreds of years[2c]. 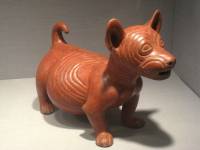 This above information came to hand and was taken into account when considering the statues of the ancient famous 'Colima Pottery Dogs' dating back to the pre-Columbian Mesoamerica era of 250 BC - 450 A.D. But these are ancient hairless dogs and Mrs Harmer believed there was no connection between the Chihuahua and the Xoloitzcuintle, the hairless dog of Mexico. This theory was also supported by the Governor of Chihuahua's public statement made in 1950[2d].

The Chihuahua becomes a Pure Breed 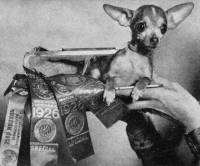 The first registered Chihuahuas were documented in the American Stud Book in 1890. By 1901 'El Capitan' was shown with 'Carita' shown the following year. By 1904 Chihuahuas were first recognized by the American Kennel Club (AKC), their numbers growing to 30 by 1915. But on August 1st 1952, Smooth and Long Coated varieties were judged separately at Shows but in the Stud book, they remained registered together and allowed to interbreed. By 1958 there was a total of 45,843 Chihuahuas registered by the AKC, the second highest number of registrations of all pure breeds at that time[1]! 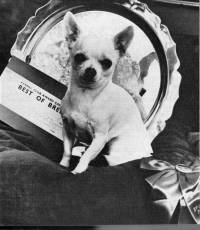 But the Chihuahua did not enjoy such early popularity in England. Although a couple of Chihuahuas from the 1880's have been preserved by taxidermy and one was exhibited at the Ladies Kennel Association Show in 1897, the first to be registered by the Kennel Club was 'Topsey' in 1907 and the next in 1924. Only 59 were registered by 1940. But after World War Two, their popularity somewhat increased in the UK with 530 being registered by 1957. But the Long and Smooth Coats are not only judged separately, they are not allowed to interbreed.

It was interesting to note that it was reported that the pure Mexican imported dogs had a natural immunity to distemper that plagued all other breeds of dogs in those early days[2e].

History of Chihuahuas in Australia 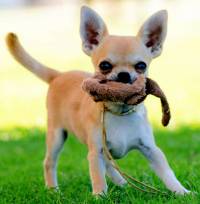 Because Australia had allegiances to Britain rather than America when Chihuahuas were first imported into Australia, dogs from the sparse British stock were selected rather than from the hugely popular American lines. In 1954, 'Nelli star Mario (Imp UK)' belonging to Mrs Fairbairn was the first Chihuahua registered in Australia. Then in 1955, Mrs Eva McMahon imported 'Denger's Dona Barbara', a Smooth Coat who whelped 3 puppies during the 3 months she sailed to Australia from UK. She founded Chihuahua's here. That same ship then sailed on to Sydney carrying the first of several Chihuahuas Mrs Rena Gerardy imported into NSW. Mrs Gerardy then imported more from Lady Margaret Drummond-Hay's English line 'Seggieden'[3]. 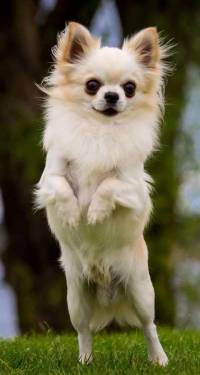 In 1963, the Chihuahua Club of Victoria became the first Specialist Club to be formed with NSW, Qld, SA and WA all having Clubs by 1970. But they had no control over inter-variety matings and the awarding of Challenge Certificates.

Because each State had its own registration system, the breeding and showing of Chihuahuas across Australia presented problems. At first Chihuahuas competed for one set of Challenge Certificates, regardless of coat type. According to the Royal Show catalogues, this was the case until 1966 when the two coat types began to be judged separately. In 1967 pairs of Challenges were awarded in Qld, WA, and Vic but not in NSW or SA although in the latter Smooth and Long Coats were numbered separately. It took until 1968 before awarding of two pairs of Challenge Certificates became uniform across Australia - one set for Smooth coats and another set for Long Coats.

But registrations of Chihuahua (Smooth) and Chihuahua (Long) had more far reaching consequences! In 1978 in line with Britain, cross-coat matings were banned with NSW, Qld and WA following, together with New Zealand[5]. But there was no ban in Victoria, SA and Tasmania. This limited stud possibilities and gene pools[6]. For example, in 1980, Thelma Gray who resided in SA, won the 1980 Brisbane (Qld) Royal Show Toy Group with her famous Ch Rozavel Tommy Ruff (Imp UK). But because he was the result of a Smooth/Long coat mating, he was unable to be registered or used for stud whilst in Qld. This was a great pity because the distance from Adelaide to Brisbane is 1,000 miles (1,600 km) and air or road travel back in 1980 was expensive and rudimentary. 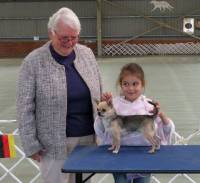 Eventually Chihuahua breeders' protests were heard and each State won their cases with Queensland being the last to lift the ban in 1986[6]. Since the rules were changed, matings between Smooth and Long Coated varieties have been allowed across Australia[4]. Today, although in New Zealand in line with Britain, inter-variety matings are still banned[5], like Australia the two coat types are judged separately.

The Chihuahua (Smooth) and (Long) Today 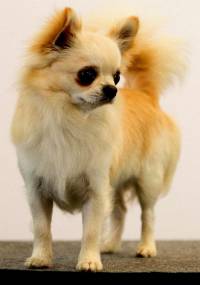 The Chihuahua is the smallest of all dog breeds, weighing just up to 2.7 kg (6 lbs), with 1.8-2.7 kgs (4-6 lbs) preferred. He is an alert little dog with saucy expression, compact and with brisk movement and terrier-like characteristics. He comes in two coat types. The smooth coat has a soft, close and glossy texture, with undercoat and a ruff permissible. The long coat with its flat or slightly wavy, but never curly texture should never be coarse or harsh to touch. It has feathering on the ears, feet and legs, pants on hindquarters, a large ruff on neck and a long fully plumed tail. 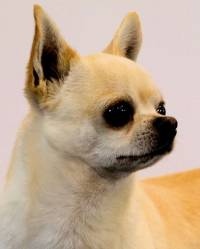 The Chihuahua's head is unique. It has a well rounded 'Apple Dome' skull, which means it is shaped more like a cooking apple than tennis ball. There usually is a 'molera' in the centre of its skull which is a membrane-covered opening in the skull because of the failure of the bones of the skull to completely close. There may be more than one which usually persists throughout the life of the dog.

The jaws and cheeks are lean. The moderately short, slightly pointed muzzle comes out at an angle of about 110° from the inclination of the definite stop.

The eyes should be large and round, but never protruding. Set well apart, the centre of the eye should be on a plane with lowest point of the ear and bottom of the stop. Although dark coloured or ruby is preferable, light eyes in light coloured dogs are permissible. The ears should be large and flaring, set on at an angle of approximately 45° giving breadth between ears. The Chihuahua has a normal scissors bite.

The neck should be of medium length and slightly arched. The body is slightly longer than square. In other words, from point of shoulder to rear point of croup should be greater than his height at withers. The back is level, the ribs well sprung, and the brisket deep. 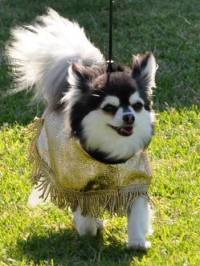 The lean shoulders should be well laid. The forelegs are straight with strong, flexible pasterns so the feet turn neither in nor out. The forelegs are set well under chest allowing them to move freely, without looseness. The feet are small and dainty with the toes well divided but not spread. The pads should be well cushioned and the nails moderately short. The hindquarters are muscular, with a good turn of stifle and hocks set well apart, so that when moving away, they turn neither in nor out. The high-set tail and carried tail is of medium length. It is furry, but flattish in  appearance. It is slightly broader in the centre and then tapers to a point.

In carriage, this tail is a called a 'sickle tail' which means when moving, it is carried up and over back. But it should never be tucked under or curled below the firm and level topline. The Chihuahua moves with a brisk, forceful action with good reach and drive in hindquarters. Whether viewed from the front or from behind, the legs should move neither too close nor too wide. He comes in any colour or mixture of colours but never Merle (dapple).

Russian Toy and the Chihuahua Comparison

These two 'pocket sized' breeds, both coming in Smooth and Long Haired varieties, are arguably the world's smallest pure breeds. Developed independently on different continents, their comparison is presented here.

[1] Russell E Kauffman, 'The Chihuahua' Published by the Judy Publishing Company, Chicago USA 1959 Section A 'The Origin, History and Development of the Chihuahua Club of America, Chapter One "Probable History of the Chihuahua in America before 1900 Page 11.