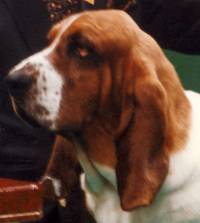 This section contains short legged Scent Hound breeds not yet dealt with in detail. These were bred for two different purposes. Some short legged Scent Hounds that were bred to follow their prey beneath the ground are of similar construction to short Legged Terriers with deep chests. Others were developed on short legs so they could be more easily followed by a hunter on foot, rather than the huntsman mounted on a horse. Hence the name of members of this family being called 'Basset' from the French word 'Basse or 'Bas' meaning low.

In Europe, it seems that every separate country has its own Scent Hound. The French Hounds are particularly interesting boasting some 76 breeds and/or varieties which were derived from the packs on the old pre-French Revolution estates. Within the various breeds of Scent Hounds, the Basett Hounds alone include the Basset Fauve de Bretagne, the Grand Basset Griffon Vendéen and the Petit Basset Griffon Vendeen. But to confuse the issue of French origin, the breed actually named the Basset Hound was developed in England and popularized there with cartoon characters such as 'Fred Basset'.

Dachshunds belong to this category that, like Terriers were bred to work underground but were developed in Germany. Similar to Terriers, their legs have been shortened in order to dog through tunnels.