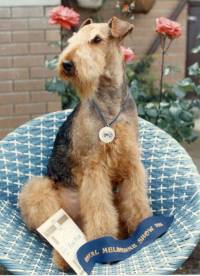 One day my mother and I (Ken Campbell) decided to buy a dog to replace our old Labrador which had just died. Mum wanted an Airedale, so we looked in the newspaper and answered advertisements to look at both. My mother, Irene "Rene" Campbell's choice fortuitously came first and we arrived at a house to see a litter of ten puppies. I wanted THAT one but the owner was reluctant to sell it because she was 'under instructions' from the owner of the father of the pups (Jane Harvey) to keep it. The pup was without a doubt the 'pick of the litter'! He soon became Aust Ch Rangeaire Rocka Billy.

Ken with his mother and aunt

Shortly after Billy was was purchased as a pup, the foundation of my lifetime in the dog world began. As Jane was technically Billy's technical breeder, a series of visits to her home followed to learn the art of grooming and later to learn the basics of dog showing. Jane always encouraged me, saying that I had a demonstrated a natural 'eye for a dog' because I insisted on buying Billy in the first instance. Billy won several Best Exhibit in Group awards as he quickly progressed to become not only my first Australian Champion, but also 'Airedale of the Year'. So we became hooked on dog showing and ultimately began breeding our own Airedales. 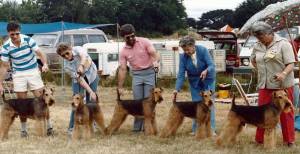 Billy on left with his first 4 Champions

In partnership with my mother whose sister my Aunt Lucie often accompanied us to shows, we registered the Belltirna prefix and went on to produce several lovely Airedales. Our foundation was the two bitches we kept from a mating between Billy and Ch Windview Sweet Alice, CD who had a strong Tjuringa background which complemented Billy's bloodlines. From this mating came the four Champions pictured here with their father, Billy. 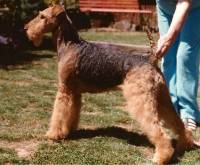 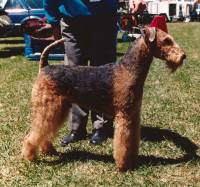 Ch Belltirna Talk of the Town 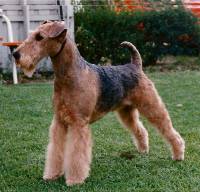 Ch Windview Illara due to ill health only had one litter which produced multi champions and also a wonderful producer in Belltirna Constellation for Fay and Malcolm Peden's Lufftal Kennels in Goulburn, New South Wales. A son from this litter was the multi BIG winner Ch Belltirna Cirarthah and the very successful bitch we kept Ch Belltirna Cutenpretty, a Melbourne Royal Challenge winner.

After a break of some years we obtained the lovely Ch Tjuringa Kentucky Woman from Keith And Trish Lovell. This bitch was twice reserve CC at Airedale Terrier Club of Victoria Championship Shows and a multi puppy in show winner. We bred her to Ron and Anne Sorraghan's Gr Ch Oldiron Just Awesome and this produced a dog, Sue Jolly's BIS, BISS Supreme Champion Belltirna Believeitornot. 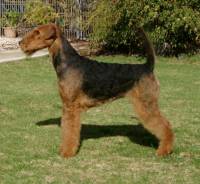 We kept one of the bitches from this litter, BISS Ch Belltirna High Society who in her short show career in one year 2006, was BIS at the Airedale Specialty in NSW (under renowned Airedale breeder Alessandra Sommi Picenardi "Cuca" of Ginger Airedales fame, RUIS at the Victorian Airedale Specialty, and best bitch at both the Sporting Terrier Club of Victoria and Royal Melbourne Show. Her litter sister was Ch Belltirna Myfair Lady from this breeding was a foundation bitch for Bob and Nessie Brooks Clydebrook Kennels. 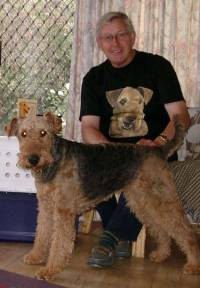 Meanwhile, I had married Jan Braithwaite who already was well entrenched in the dog world with her Smooth Fox Terriers. I gained my Terrier judging licence and today Jan and I actively enjoy our full time 'hobby' in the pedigreed dog world exhibiting and judging together both locally and internationally. I am now also Jan's partner breeding and showing our Smooth Fox Terriers under her Optimo prefix.

Due to the wonderful profile Sue Jolly has had with Sup Ch Belltirna Believeitornot over many years and our increasing involvement with our Optimo Smooth Fox Terriers, we transferred the Belltirna prefix to Sue in late 2012 and we wish her continued success.