Bull Terriers to the Rescue

For centuries, people have used dogs' magical scenting ability for many purposes. Search and Rescue work and patrolling is not usually associated with the Bull Terrier breeds. But as this article demonstrates, with skill and lots of patience, Bullies can be trained to focus on conservation and community work as well as taking part in a fun sport with humanitarian implications.

'Pepper' is a Bull Terrier who has become an integral part of a conservation scheme in the Balule Game Reserve on the western boundary of South Africa's famous Kruger National Park. This project is aimed at protecting South Africa's Rhinos from poachers. When Pepper was a small puppy, her owner Adrian, trained her to assist the Anti-Rhino poaching team. Always on duty, Pepper and Adrian patrol the Reserve, tracking down armed poachers. This is dangerous work, exacerbated by having to camp out regularly in the wilderness for several days and nights on end. 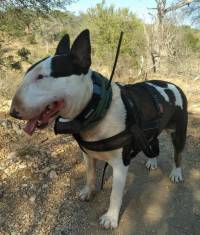 But Pepper can be relied upon to warn Adrian should their camp be threatened by prey animals like lions or leopards during the night. Worse the camp could be trampled upon by a herd of wild elephants! While working, Pepper's harness includes a GPS within her collar. So, at the push of a button, Adrian can ascertain where Pepper is and can give her muted commands. This is critical when loud voices could reveal her position to poachers or panic dangerous game to charge[1].

Search and Rescue and Cadaver dogs in USA

Although not yet called upon to assist in Search and Rescue in real life situations, 'Saki', the conformation Champion pictured on the left, was probably the first Bull Terrier to gain her Search and Tracking Dog Excellent title under the American Kennel Club rules.

In 2011, 'Sage', another Bull Terrier who was a specialist cadaver dog, searched for human remains in the rubble of the 9/11 terrorist attacks on the twin towers in New York. On a separate occasion, Sage found a drowned 14-year-old boy's body underneath the water. She had spotted it from the bow of a boat. What closure this gave the boy's family! 'Sage', who was bred from conformation Champion parents, was featured on the popular TV series, 'Animal Planet'.

Track and Search in Australia 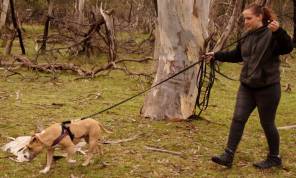 In Australia, Tracking as well as Track and Search are Sporting disciplines where dogs can earn titles. Unlike Agility or Obedience where your dog obeys you like a robot, in Tracking the dog follows its nose and leads its handler potentially, for hours. All dogs enjoy walking through bushland, paddocks, and/or along urban streets! Putting trust in the dog's nose and following it, creates a special bond between dog and handler. With skill and patience, terriers enjoy using their initiative to play what they seem to regard as a great game!

Tracking and Search as a Sport 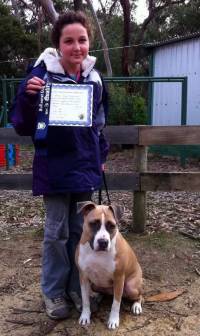 At first the dog is trained to recognise a scented article belonging to the person it will be required to track. Soiled socks previously worn by that person make wonderful, scented articles. A hidden treat inside the sock makes an even better training tool! Once the dog gets that idea, a straight line consisting of several soiled socks stimulates the dog to begin serious tracking in a forward direction.

The American Staffordshire Terrier pictured with her 11 year old owner, is proudly showing off her dog's first qualifying certificate. But they needed to pass many more tests of increasing difficulty before they qualified as Australia's first American Staffordshire Terrier to become a Track and Search Grand Champion. By that time her young owner, Tamika Staszek, was 13½ years of age.

In Australia, Tracking activities are mainly held in paddocks and bushland, with distractions of the scent of other animals like rabbits, foxes, and kangaroos. As the tests become more complicated and difficult, a second title, Track and Search has the eventual implications of finding people missing or lost in the wider community. With the track laid some 5 hours before the test begins, the dog may have to cross small streams or shallow bodies of water, negotiate pedestrian traffic including other dogs walking on leads, and roads with light traffic. Tracks may also cross bridges, pass through shelters or parking areas or go up and down stairs and ramps.

Track and Search both Ground and Airborne Scent 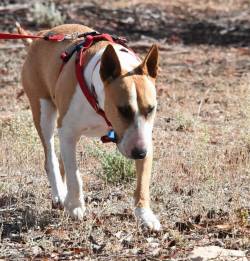 To ensure the dog can follow both air-borne scent and ground scent, at some point during the test, the track layer travels in a motor vehicle with the windows open, for about 300 metres. Having followed the airborne scent, the dog must pick up the ground scent where the track layer left the vehicle and follow it to its destination.

Pictured is 'Pele', our first Bull Terrier to become a Track and Search Grand Champion. Also, an Australian conformation Champion, this bitch qualified to become a Search and Rescue Grand Champion at 13½ years of age.

It is wonderful that breeds not usually associated with Search and Rescue, have become so successful!

[1] Material and photos supplied by 'Rhino Watch' which is Adrian's initiative conducted in the Balule part of the Greater Kruger Park. This is entirely self-funded, relying on personal investment and support from the local community as well as the generosity of Pepper's supporters, and other Bull Terrier enthusiasts.