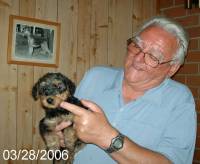 This section combines information I have so far on a few kennels whose beginnings were closely connected to 'Rangeaire'. Published here is my memories from some people plus the material I have so far to hand. 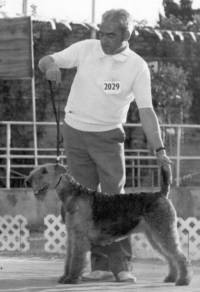 Walter (usually called Wally) and Myra Brown were Scottish with a very broad accent which they never lost. They first met me with Ch Brentleigh Ben Nevis CD at a demonstration of dog obedience held within the gardens of Melbourne during a 'Moomba' Festival. They fell in love with Ben and decided to purchase an Airedale. As we did not have puppies at that time, they went to Keith and Trish Lovell and purchased their beloved 'Mandy' Ch Tjuringa Cactus Flower. As Ben Nevis died before Mandy was ready to mate, they used his son Ch Rangeaire Ringo Starr to produce their first Champion Glenfailte Filigree and went on to produce at least another eight Champions.

After Ch Glenfailte Filigree they produced: 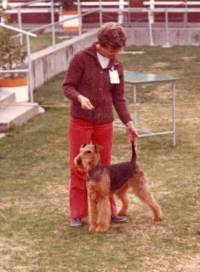 Wally and Myra were dedicated Airedale people and great contributors to the breed. Unfortunately Myra died as a result of knocking her head during an unfortunate fall within their home which caused a fatal head injury. Afterwards, Wally never really picked up his life despite continuing his involvement breeding and showing airedales. But being a Scotsman he turned to whiskey, and the effects of his drinking sadly killed him. But Wally and Myra Brown were certainly characters who adored all their airedales. They are sadly missed by many of us who have outlived them. 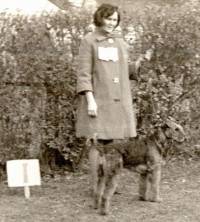 Lily Howlett bought her first Airedale, Ch Rangeaire Sheba from us. She was from our first litter. Like Alan Bardoe, Lily and Fred were also 'ten pound' immigrants from UK and Fred was in the army. Sheba was shown through to her title in Victoria and then they moved to Brisbane first, finally settling down in Adelaide. There Fred died preceding Lily by some years. But Lily continued breeding under the prefix of 'Clesha' until her demise, her breeding spanning a couple of decades. 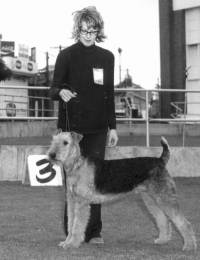 Jan and Peter Hatton arrived on my doorstep answering an advertisement for the last puppy I had left in a Ben Boli litter. They were also going to look at another breed, but we got talking and they left with their first Airedale who became Ch Rangeaire Rani. They spent many hours with us, learning the in's and out's of not only showing but also grooming. They enjoyed some success with Rani and were hooked. They bred their first litter with Rani and so Bushvelt was established! As it grew, they sold their suburban home and moved onto a much larger property in a country area and established quite a large concern where they also had boarding kennels. Bushvelt are still actively breeding and showing despite Jan passing away in 2018.