Types of Sheepdogs c 1803The evolution of the herding dogs we know today evolved many centuries after the Livestock Guardian Dogs. By then flocks of domestic animals did not freely roam from place to place to find more fertile land. Instead, good pastures became fenced places. Then predators like the wolf became less of a threat. So instead of Livestock Guardian Dogs living within flocks of roaming sheep and goats and not disrupting them, herding dogs did disrupt the behaviour of flocks of domestic animals. This was because the herding dog had to shepherd the livestock on command from place to place. 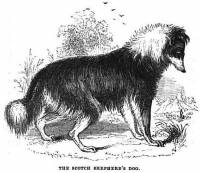 The 'Peat Dog', was the first dog that appeared to live in some type of relationship with people who were called 'pile dwellers'. The Peat Dog was a medium sized Spitz-type dog, a little larger than a fox.

Evidence of the Peat Dog exists in the piles of rubbish and debris communities left when they moved. This rubbish and debris consisted not only of discarded bones of deer, wild boar and oxen, but also shells of molluscs and crustaceans. Through these discarded debris, evidence of dog's earliest domestication is found. The skulls of dogs themselves, as well as teeth marks on discarded bones of animals that were killed for food, provide proof of these dogs living in a dog-man relationship. Additionally domestication of sheep and goats at this time, indicate these Peat Dogs could have been the earliest of the pastoral dogs. 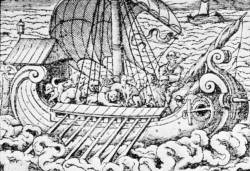 Around 2,500 B.C. nomads invaded Britain from France and the Low Countries, bringing with them a generally Mediterranean Neolithic culture. As the Greeks had ships similar to the one illustrated, it is reasonable to speculate this is how these early settlers reached Britain, bringing domesticated sheep, goats and Peat dogs with them.

In Britain there are several causeway-ed camp sites which have been carefully excavated by archaeologists. These sites did not appear to be permanent settlements. Rather, they appear to be market or trading places where pristine pottery and tools have been found. By the numbers of cattle and sheep bones also excavated, it appears these were also traded here or alternatively, were some sort of ritual burial sites. 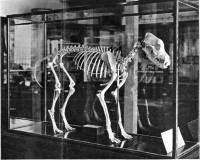 In the Morven Museum in Avebury, which is close to a causeway-ed camp site called Windmill Hill in Whiltshire in the South of England, a perfectly preserved dog skeleton, over 4,000 years old has been retrieved[1]. This dog measures around 16 inches high, its smallish teeth signifying it was a domesticated dog which did not have to survive by killing its own food. As these sites also contained bones of domesticated cattle and sheep, this dog undoubtedly lived on the scraps of these animals the humans left behind. In other words it must have been domesticated probably because it assisted with the rounding up and the droving of this livestock. 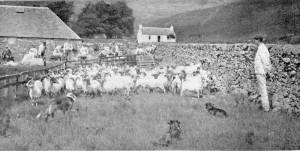 As the centuries rolled by, the dog's natural prey instinct of chasing has been modified to herd domesticated farm animals under the direction of a person who is called the Shepherd. Herding Breeds have been recorded in Iceland (yes, Iceland!) as far back as the 13th Century. By the 17th Century herding dogs were known throughout Europe, especially in northern France[2] and in Britain.

In 1570, Dr. Johannes Caius named this dog a Shepherd's Dog in his classification that was written in Latin and translated into English by A Fleming in 1576[3]. The original translation of this important work is in my opinion too difficult to read to be printed in its original form. So it appears here as my interpretation in modern English: 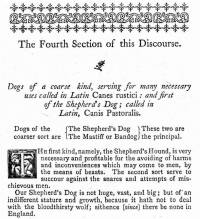 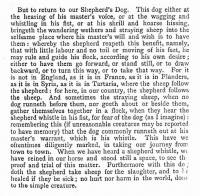 Dogs of a coarse kind, serving for many necessary uses the first being the Shepherd's Dog

The first kind, namely, the Shepherd's Hound (the Mastiff or Bandog), is very necessary and profitable for the avoiding harms and inconveniences which may come to men, by the means of beasts (for example wolves). The second sort (The Shepherd's Dog) protects against the snares and attempts of mischievous men.

Our Shepherd's Dog (the second kind) is not huge, vast, and big; but of a moderate stature and growth, because it does not deal with the bloodthirsty wolf because there are none in England.

But to return to the Shepherd's Dog. This dog either at the hearing of his master's voice, or at the wagging and whistling in his fist, or at his shrill and hoarse hissing, brings the wandering wethers [castrated male ram] and straying sheep into the selfsame place where his master's will and wish is to have them: whereby the shepherd reaps this benefit, namely, that with little labour and no toil or moving of his feet, he may rule and guide his flock, according to his own desire; either to have them go forward, or to stand still, or to draw backward, or to turn this way, or to take that way. For it is not in England, as it is in France, as it is in Flanders, as it is in Syria, as it is in Eastern Asia where the sheep follow the shepherd. For here, in our country, the shepherd follows the sheep. And sometimes the straying sheep, when no dog runs before them, nor goes about or beside them, gather themselves together in a flock, when they hear the shepherd whistle in his fist, for fear of the dog (as I imagine): remembering this (if unreasonable creatures may be reported to have memory) that the dog commonly runs out at his master's whistle. This have we often times diligently marked, in taking our journey from town to town. When we have heard a shepherd whistle, we have reined in our horse and stood still a space, to see the proof and trial of this matter. Furthermore with this done, the shepherd takes the sheep to be slaughtered, and to be healed if they are sick; ensuring no hurt nor harm in the world would be done to the simple creature.

[3] Dr John Caius, "Of Englishe Dogges: The Diuersities, the Names, the Natures, and the Properties", London, 1576, translated into English by Abraham Fleming, Pages 26-27. The work was originally published in Latin in 1570 as "Johannes Caius, De Canibus Britannicis".