The Tibetan Spaniel is a small toy dog developed by eunuchs who ran the day-to-day affairs of the Emperors' Palaces in Tibet. They became constant companions of the Dalai Lama. The exchange of these small dogs as gifts between the Emperors of Lhasa, the capital of Tibet and Peking, the capital of China meant they played an important part in the development of the Pekingese.

History of the Tibetan Spaniel 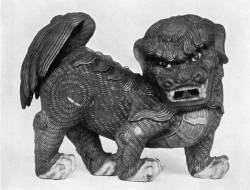 The precursor of the Tibetan Spaniel was first developed by the monks in the monasteries of Tibet around 600 A.D and called 'sleeve dogs'. Lamaism in Tibet is very similar to the Buddhism of China, together with grave statues like the ones shown here. There was also exchange of small 'lion-dogs' as gifts between the Emperors of Lhasa and Peking. As this journey took ten months traveling around 2,000 miles over steep mountains covered in ice and snow, these little 'lion-dogs' had to be extremely robust to survive[6]. 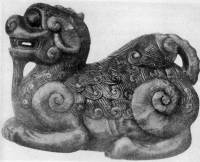 From around 500 A.D, small dogs became the earthly representation of the 'lion-dog' associated with Lamaism. Although this 'lion-dog' was not worshiped or used in sacrificial ceremonies, it appeared in religious ceremonials which secured its place among the superstitious. 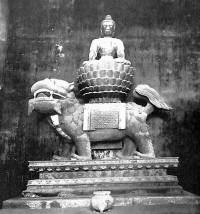 " The lion is the King of Beasts. It's power of increase is without limits. Similarly it may diminish and become like a dog. So is the anger of man"

This gospel then goes on to explain that a person who keeps his anger under control shall be free of disaster and distress. But if this person's fury fails to be bridled it will increase to the size of the lion. But when diminished, would turn back into a small 'spirit lion-dog'. So it is through this lion's form that the nature of anger became known to man[4] 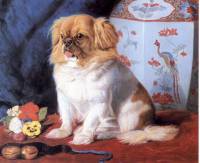 During the conflict of the Second Opium War of 1860, five Asian Spaniels were plundered from the Summer Palace when the British invaded Peking (now Beijing, China). One was appropriately named "Lootie"(pictured) was presented to Queen Victoria of England. "Lootie" became famous because of her charm and aristocratic manner and lived until she was 16 years of age. Of Tibetan Spaniel type, she and the other four dogs which came from the Summer Palace are considered to be the foundation of the Pekingese breed in England. 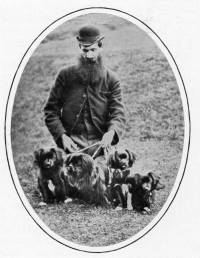 Tibetan Spaniels never worked as Land Spaniels as described in the History of Spaniels. Instead they were watchdogs, warning the large Tibetan Mastiffs of impending danger. This gave them some appeal to English where they were first introduced into England around 1900 and campaigned by the Hon. Mrs McLaren Morrison who believed the 'Thibet' Spaniel was the true ancestor of the Pekingese and Japanese Chin[5]. 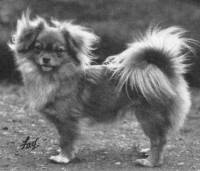 By 1930, the dog pictured was considered to be a remarkable bitch of ideal type. She was the property Mrs Greig of the Rozel Kennels in Royden Essex in England[3]. It is believed that these Tibetan Spaniels of this type were the ones from which the Pekingese in the Summer Palace developed[3a]. 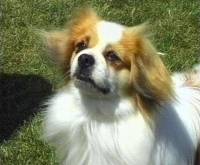 Today, the Tibetan Spaniel has a body longer than its height at shoulder. He has a smallish head with a slight dome. His relatively high set ears may have a slight lift from the skull. His medium sized oval shaped eyes, and cushioning on his medium length of muzzle gives it a soft expression. His jaw should be wide housing a reverse scissors or undershot bite but a level bite is also acceptable. 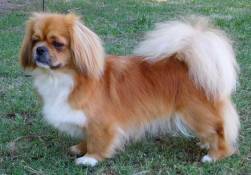 His medium length neck is covered by a beautiful mane, more so in males. The Tibbie's chest should come down to its elbows and his body should have a good spring of rib so his front legs are slightly bowed. His high set gaily carried tail is furnished with a beautiful plume. The Tibetan Spaniels' silky coat which can be any colour or mixture of colours, lies rather flat. Although double coated, it is smooth on the face and fronts of the legs. The Tibetan Spaniel stands around 10 inches (25 cms) high and weighs between 9 and 15 pounds (4.1 - 6.8 kg).

[3a] Ibid., Chapter 1X 'The Pekingese and its Relatives' The Thibetan Spaniels Page 171