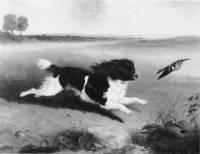 The Spaniel was a type of dog used for catching birds and small game. In the first Century BC. when the marshes and banks of the Nile abounded with water fowl, small birds and migratory quail were hunted with spears and by throwing sticks[1].Then small dogs were used to flush these birds out of the undergrowth into nets. Today these small dogs are called Spaniels and many different Land Spaniel and Water Spaniel breeds recognized. 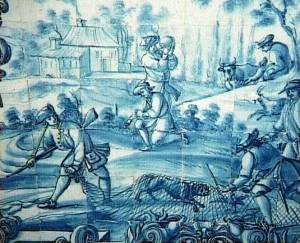 Fowling is the practice of capturing of game birds including geese and ducks, which could be used for food and clothing. Before the invention of guns, wild birds were captured by large birds or falcons in conjunction with Spaniels.

'The Master of the Game' was a work written by Edward, the Second Duke of York based on Gaston Phoebus's 'Livre de Chasse' written in 1387 AD. He was the first to suggest that 'Spaniels come from Spain but not withstanding this, there are many in other countries'. He went on to describe how the sportsmen hunted with nets, Spaniels and trained hawks up in the air. The game would not dare to move lest the hawk should see them. The Setting Spaniels, on scenting the game, would turn in the direction in which the game was hiding. So with the hawks keeping the game stationary on the ground, the Setting Spaniel could get very close to it. With the Setting Spaniel trained to then lie down or crouch perfectly still, the sportsmen could place the net over both the game and the dog. If the dog was moving or standing, it would make throwing the net over them more difficult[4]. 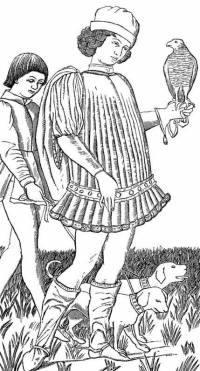 Falconry was the sport developed from the fowling which was the more traditional use of Spaniels with nets. More often used by the aristocracy, falconry involves the use of a trained bird of prey like an eagle or a hawk, to snatch up smaller birds which were often in flight, and retrieve them to the handler who was called a falconer. Training birds of prey was similar to training a dog - the bird of prey was given a reward when it returned. Falconry is still practised to this day more as a sport than as a necessity as it was in days gone by.

But fowling was the necessity which created of two types of Spaniels, Land Spaniels and Water Spaniels. By the 1500's the Setting Spaniel had also been developed in Britain. All these Spaniels could be used in conjunction with either a trained hawk or falcon as illustrated with falconry, or for the historically earlier use for fowling with the net as described above.

Or were I sprung from Spaniel line,
Was his sagacious nostril mine,
By me, their never-erring guide,
From wood and plain their feasts supplied,
Knights, squires, attendant on my pace,
Had shared the pleasures of the chase.[3]

The Origin of the Spaniel

In 1570, Dr. Johannes Caius gave the name Spaniel to the type of dog that was used for the type of hunting called Fowling. Dr. Caius' classification was originally written in Latin and translated into English by A Fleming in 1576[1]. The original translation of this important work is in my opinion too difficult to read to be printed in its original form. So it appears here as my interpretation in modern English. 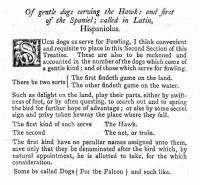 Of gentle dogs serving the hawk; and first the Spaniel ; called in Latin, Hispaniolus.

Such dogs are used for Fowling are Spaniels of the gentle kind (meaning what is known today as 'soft mouthed' or those dogs which would not puncture the skin of the game with their teeth). There is also the Spaniel Gentle which is purely a companion dog. But here we shall consider those which are used for Fowling of which there are two kinds 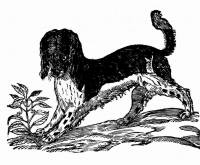 There were also Setting Spaniels which worked on land, but found their game in open land doing so by questing (galloping ahead of his master in search of game) to search out or spring the bird so his master, the huntsman could trap it. Alternatively these Spaniels would stand and somehow mesmerise the bird, betraying or showing the huntsman where it had settled. These were the Setting Spaniels (which today are known simply as Setters). These would either be used in conjunction with the net, or with a bird of prey as explained above.

Neither the Setting Spaniels nor the Land Spaniels had particular names assigned to them. However Caius suggested calling the dogs was after the trained bird of prey they most commonly used to assist the huntsmen in catching for example 'The Falcon Spaniel'. 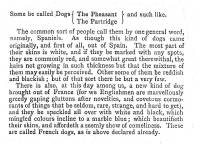 Most people call these dogs by one general word Spaniels, because this kind of dog came originally out of Spain. Some Spaniels which work on the land do so to be used with the hawk. By swiftness of foot, they cause the bird to take flight, so the hawk can swoop down on them and take them to their master. Alternatively, they quest backwards and forwards, searching out and springing the bird so betraying the place where they hide, so a net can be thrown over them. 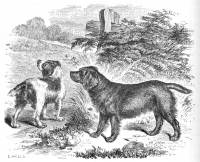 The major part of their coat is white, and if they are marked with patches, these are commonly red and you can easily see the separate colours. Alternatively some are completely red or black and tan but these are rare.

There is also at this day among us, a new kind of dog brought out of France for we Englishmen are marvellously greedy gaping gluttons for novelties, and desire things that are rare, strange, and hard to get. These Spaniels are speckled all over with white and black individual hairs, which mingled together look like a marbled blue; which beautifies their coats and affords a showy look.

The ability of this kind of dog which hunts birds upon water is partly a natural instinct, and partly diligent teaching. This sort is somewhat big and heavy, having long, rough, and curled hair not obtained by extraordinary trades, but given by Nature's appointment. Yet nevertheless, I have described and set him out in this manner, namely knotted from the shoulders to the hind legs. The end of his tail is somewhat bare and naked, as if by shearing off such troublesome and needless hair, they might achieve more lightness and swiftness, and be less hindered in swimming.

This kind of dog is properly called a "Water Spaniel" because he frequents and has an affinity for water, where his game, principally ducks and drakes live. Hence he is often called " a Dog for the Duck." These dogs fetch fowl out of the water as if they were stung to death by a venomous worm. These dogs also bring the hunters their arrows out of the water that have missed their mark and otherwise would not be recovered. Often they will also bring lost shafts, which the hunters thought they would never see, touch or handle again. Under these circumstances they are called "Searchers," and " Finders".

Although the duck and other water birds try to deceive both the dog and its master by diving under the water, these birds can also act subtlety in another way. If a man approaches the place where they build, breed, or sit on a nest, the hens offer themselves voluntarily to the hunter's hands by pretending they have a certain weakness of their wings or an infirmity of their feet. 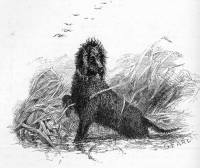 So these water birds go so slowly and leisurely, enticing and alluring the men to follow them until they are long distance from their nests. By this provident cunning, or cunning providence, they avoid betraying the place, where the young ducklings are. Great therefore is their desire not only to protect their brood, but also to protect themselves. For when they have an inkling that they are seen, they hide under water weeds, whereby they cover themselves so closely and so craftily, that only the Water Spaniel, by quick smelling, may discover their deceit.

Caius extract on The Fisher Dog

There has been a report of a dog called a Fisher, which seeks fish by smelling among the rock and stone; I know of none in England but I have been diligent and busy in demanding the question of fishermen and huntsmen, being careful and earnest to learn and understand of them if there are any such dog. When fishermen and huntsmen have been diligently questioned, some believe that the Beaver or Otter as well as the Puffin bird act like some species of fish.

But there is a kind of dog which follows the fish to apprehend and take it; whether they do this for the game of hunting or for hunger like other dogs (which when they are famished for want of food, covert the carcasses of carrion and rotting flesh). I know that when fish are scarce, both the Beaver and Otter leave the water and range up and down the land; slaughtering a lamb until they have fed themselves with flesh; then return to the water from whence they came. The seal also hunts fish between rocks and banks. So it is logical to include a Fisher Dog which acts in this way is included in this classification and when I am fully convinced of this, I will send you a certificate in writing.

We have now published a unique book called 'Gundogs Unveiled' Available at our sister site: https://rangeairevision.com/gundogs-unveiled/

See also DVD 'The History of Spaniels' by Jane Harvey

[2] Dr John Caius, "Of Englishe Dogges: The Diuersities, the Names, the Natures, and the Properties", London, 1576, translated into English by Abraham Fleming, Pages 18-22. The work was originally published in Latin in 1570 as "Johannes Caius, De Canibus Britannicis".