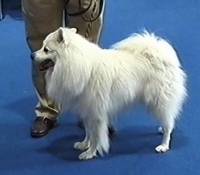 This section contains breeds which are closely connected to our Non-sporting Spitz breeds. For example, pictured is the FCI recognized Giant Spitz (FCI 97), the largest of the German Spitz family, which is 49 cm (plus or minus 6 cm) tall but not yet recognized in Australia.

Italy has its own medium sized usually white dog similar to but not related to the German Spitz. Called the 'Volpino Italiano' (FCI 195) Volpino is an Italian word meaning fox-like. He stands 25-30 cm high with champagne or red colouring tolerated but considered to be an imperfection.

It is believed that the history of the Vopino goes back to when they lived alongside man in lake dwellings, evidenced by a terracotta image dating back to the Mycenean civilization of 1200 BC and portrayals found on Pharaonic tombs. Centuries later, it occupied 'royal palaces and lordly palaces'. The Volpino then re-emerged in the lives of ordinary people and found favour with the people of the Italian district of Maremma. After World War Two, there were only a few reliably left which gathered together. By 1970 sufficient numbers had been collected to resurrect the breed we know today[2]. 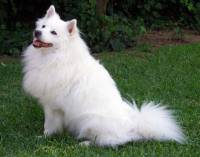 From the German Spitz, America developed the American Eskimo Dog as a pure breed. In the early 1800's, when German immigrant farmers arrived and settled in the Mid-West part of America, they brought their culture with them. They also brought their medium sized German Spitz to be used as farm dogs. After World War One, these small white dogs became the ancestors of the 'American Eskimo Dog'. These famously performed in the popular travelling circuses, one of which was 'Barnum and Bailey'. The AKC also only recently recognised the American Eskimo Dog as a pure breed[1]. 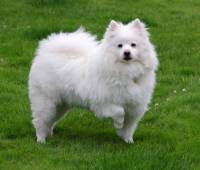