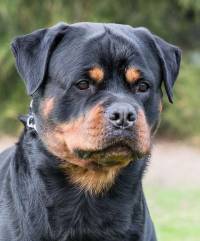 The Rottweiler is a self-assured, steady and fearless medium to large sized dog, neither heavy nor light, and neither leggy nor weedy. Good-natured and placid, he is obedient, biddable and eager to work. His appearance is natural and rustic and his behaviour self-assured, steady and fearless. He reacts to his surroundings with great alertness but at the same time is always even tempered.

History of the Rottweiler 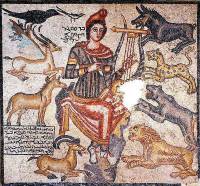 Rottweiler history can be traced back to Rottweil, a settlement founded in AD 73 at the junction of several ancient Roman military trading routes. Rottweil was the first town to be established in the Province of Germania which is now in Southern Germany. Evidence of Rottweil's antiquity are Roman baths and a mosaic dated 194 AD, similar to the one pictured of Orpheus playing his lyre, attracting birds and animals of many species[1].

One of these trading routes was north over the Alps via the St Gotthard Pass. The Romans took cattle with them, together with their experienced driving and herding dogs. These dogs were mixed with purpose bred dogs met along the way, including those from the North and the forerunners of the Bernese Mountain Dog. Then indigenous hunting dogs like the German Boarhound and later, the Bullenbeisser were added to this mix. Meanwhile the village called Rottweil had grown into a Roman municipality which gave its citizens the privileges of Roman citizenship and the right to live according to their own laws and customs[1a].

With the fall of the Roman Empire, Rottweil became one of the largest centers of trade in cattle in Europe. Driving herds of cattle and sometimes also sheep to and from this famous market needed a quiet reliable dog with considerable physical strength. So the purpose-bred dog of Rottweil became famous beyond the borders of his homeland. He was then used not only as a herding dog, but also as a guard and draft dog. At that time, strong dogs were commonly used for delivering products such as milk. This occupation ensured the preservation of the Rottweilers' physical strength until its development as a pure breed. Rotteil remains proud of being the birthplace of the Rottweiler, erecting the statue photographed below in its streets[1b]. 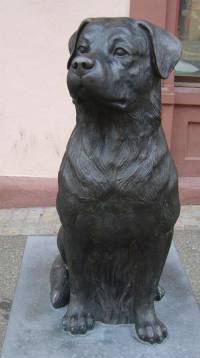 The Rottweiler becomes a Pure Breed

The first Rottweiler Breed Standard was written in 1901 with the breed making its debut at the Heidelberg Show in 1905. Billed as 'a fine dog of unusual breed and irreproachable character', his excellent qualities encouraged other enthusiastic admirers to found the German Rottweiler Club in 1907. The breed progressed so much that the Club became affiliated to the German Police Dog Association.

By 1926, around 40 regional Rottweiler Clubs were formed across Germany as well as some in Europe. So a General German Rottweiler Club, the ADRK was created to oversee the future development of the breed. Amazingly, the unity of the ADRK and the reputation of the Rottweiler himself survived all the political turmoil of the Second World War[1c]. It was written: 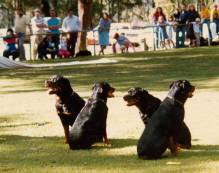 'During the war, there was an inevitable recess in the breeding and keeping of Rottweilers.... many Rottweilers of value for breeding had to be handed over for active service.... wherever Rottweilers, well-trained and handled were assigned to duties appropriate to their abilities, they acquitted themselves well and gained credit for the breed'[2].

After the Second World War, the ADRK revised the original Breed Standard and submitted it to FCI which first approved it in 1967[3].

History of Rottweilers in Australia 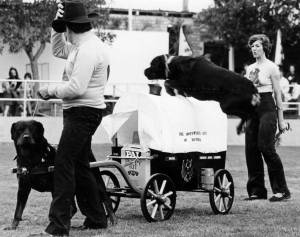 The credit of introducing and initially promoting the Rottweiler in Australia lies with Mr Doug Mummery. Already involved in police training, in 1958 he first selected a dog from UK with the conformation and temperament he was aiming to introduce here. But sadly, this dog died from heat exhaustion en route by ship to Australia. Fortunately, in 1962 Captain Roy Smith emigrated from England bringing with him a Rottweiler dog and bitch. Mr Mummery purchased a bitch from Roy Smith's first litter and later imported a dog[4].

The Rottweiler Club of Victoria was founded in 1971. During their early years, in addition to holding Championship and other Shows, they were committed to promoting the Rottweiler's working ability. In the days before Agility, carting and other active disciplines became popular here, Obedience was the only formal training activity. To this end, the Rottweiler Club conducted not only its own Restricted Obedience Trial, but uniquely another open to all breeds. 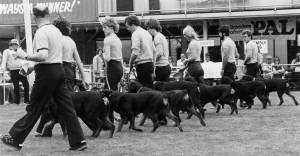 Comparison between the Rottweiler and the Bernese Mountain Dog

These two modern breeds are considered here together because they have a common origin and purpose. In Roman times their ancestors drove cattle along ancient trading routes north from Italy over the Alps via the St Gotthard Pass to Switzerland and Southern Germany. Centuries later, both breeds were used for carting.

[1a] Ibid., Chapter 1 - Origin, Decent and History of the Rottweiler Page 2

[1b] Ibid., Chapter 1- Origin, Decent and History of the Rottweiler Page 4

[4] Pat Hall - "The History of Purebred Dogs in Australia" The Rottweiler. Published by OzDog Newspaper 1997 Page 225