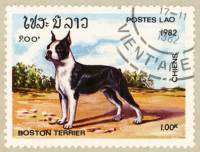 Boston Terrier Stamp The French Bulldog and Boston Terrier could appear similar as they are both smooth coated brachycephalic or short-faced breeds of approximately the same height with naturally short tails. Additionally these two breeds have the common origin of the now extinct Toy Bulldog. They began to develop a century after the original purpose of the Bulldog had been outlawed. During the following century these two breeds developed remarkably differently. So with their evolution into separate breeds taking well over a hundred years, a comparison of these two breeds is interesting. 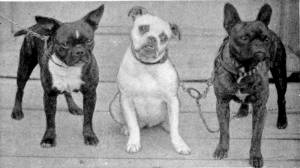 The Toy Bulldog first appeared in England in the late 1850's when the Bulldog was taking centre stage as a show dog. A Toy Bulldog Club was formed to cater for Bulldogs weighing only 15 - 16 pounds with bat shaped ears and a shorter underjaw than his Bulldog ancestor. Before the days of caesarean births, it was very difficult to raise Toy Bulldogs. So the allowable weight was increased to 20 pounds. 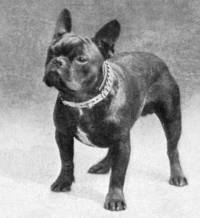 Then arguments began not only because it was considered that 20 pounds did not constitute a Toy, but also because a small Bulldog with bat shaped ears was developing in France, probably with a bit of Spanish influence derived from the dogs which took part in bull fighting. This happened when the Industrial Revolution of England was causing English workers to become redundant. So English lace makers were emigrating to Northern France as well as America, accompanied by their Toy Bulldogs.

Despite it being written in 1909 that:

Toy Bulldogs have come to stay, and although the bat-eared French Bulldog is much liked, yet a miniature of the large dog (Bulldog) is what is required'[6].

Once it was proposed that the English variety should allow only rose shaped ears and crosses with the small Bulldogs from France became prohibited in England, the Toy Bulldog's popularity began to fade[2]. This breed is now extinct.

History of the French Bulldog 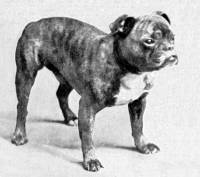 The Toy Bulldog of England's fate was further sealed because the small Bulldog of France had become known as the Bouledogue Francais. Also those who remained in England had imported French Bulldogs to improve their Toy strains. So in 1902, a Meeting was called to form the French Bulldog Club of England and draw up a Breed Standard to combine all the 'good' points of small Bulldogs. The next year this Club held a Show for pure breed French specimens either imported or bred from French imports. This led to the Kennel Club's recognition of the French Bulldog under the name Bouledogue Francais and a Breed Standard being set up to settle the disputed points[1a]. As this occurred three years after the first French Bulldog Show was held in the USA in 1898 allowing only bat shaped ears[1], controversy continues to this day as to whether country of development of the French Bulldog is France, England or even America!

History of French Bulldogs in Australia 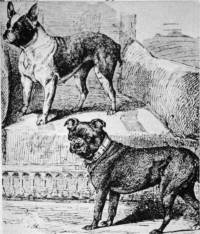 In Australia, one 'Bouledouge Francais' is recorded as being imported in 1908[3] with a number of others making their way here prior to World War 2. But it appears that no litters were registered. By the late 1940's a few more dogs were imported making a name for themselves, the first being Morebees Bunny (Imp UK) to NSW and Chassewood Rhea (Imp UK) to Victoria but there was still no record of litters from any of these dogs. By the early 1950's some serious breeding stock was imported into Australia notably by Mrs Portwine (Reserview) and others which formed the background for the breeders of the 1960's and beyond. Of these, it is fair to say Dulcie Partridge (Kama) and Kath Bartlett (Sanstache) piloted Frenchies over the next few decades, laying the sound foundation for the popular breed he is in this country today[4].

History of the Boston Terrier

Meanwhile a separate breed, the Boston Terrier was developing in Boston, America in the State of Massachusetts from a cross between a small Bulldog and the Old English White Terrier. The American Kennel Club first admitted this Boston Terrier to the Stud Book in 1893 making it the first American Kennel Club recognised breed. Interestingly, his background is visually demonstrated by the picture on the right which was accompanied by the following:

This picture of two French bulldogs, one with bat ears and one with rose ears, appeared in the 'Stockkeeper" in 1892. Their owner was identified simply as Mr Thomas of England. These dogs, bred in Paris, show at this time, the Frenchie possessed many qualities for crossing into the Boston - size, black coat, and lower station. It has been fairly reliably established that the Frenchie was crossed in around 1890[5].

History of Boston Terriers in Australia 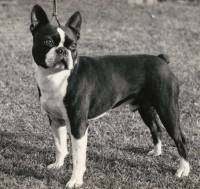 Because information on the beginnings of Bostons in Australia is particularly space, the material published below is dealt with in some detail because of the difficulty of finding it elsewhere. The Boston Terrier was unknown here until the 1950's when Mrs Scott-Findlay imported the first breeding pair into Canberra and Mr Michael Lee brought a pair into Victoria from the famous Courtbarton Kennels in UK.

Mrs Light who was already well-known with her Strathdene team of Cairn and other small terriers also brought in Courtbarton Showboat, Courtbarton Skiffle and Rusthardy Alice. Around this time Mrs Riley imported Delcinnatta Of Solarno from UK and this dog, personally selected by Mr Harry Spira had quite an impact on the breed in those early days, one notable son being Ch Herbrand Peter Pan. Also Mr Rex Summers established the Vonrefel prefix in Tasmania and imported Tailtean Mighty Wee from Mr and Mrs Fottrel who was then President of the Irish Kennel Club. 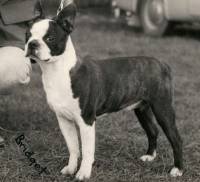 In the early 1960's Mrs Betty O'Sullivan founded her 'Perfection' Kennels in Bonnyrigg NSW. With thanks to her family[7] , photos of her dogs are reproduced here. The first is her very successful Australian bred dark brindle dog Ch Joyanders Dandy Kim was sired by Tiger Tim of Torlu out of Courtbarton Flary Mary. He won 3 all-breeds Best Exhibit in Show and 2 runners up which was quite some feat considering these were very early days for Bostons in Australia. She also owned Bostonvale Fine-n-Dandy by Ch Gaystock Charlie Chuckles out of Greenway Kute Kate. The third Boston of Mrs O'Sullivan's pictured is the bitch Ch Anisor Short and Sweet, who won at Puppy level in 1964. The History of Bostons from the late 1960's is continued below. 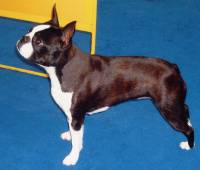 Although both breeds are brachycephalic, smooth coated and have naturally short tails, they have three important distinguishing features separating them. These are

Comparison between the French Bulldog and Boston Terrier 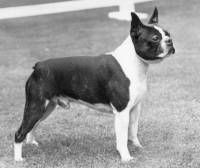 Later, Mrs Joyce Hedley imported Gaystocks Whiskey Moll, Gaystocks Vera Vodka, Parkraine Solitare and Ch Folly Frolic Gay Boy from UK into New Zealand and in the late 1960's brought all her Bostons across to Australia. Also in the late 1960's Mrs Hedley brought Anjas Wards Black Prince from Texas to UK and when he was living there he sired Balleris Bunny Whitefoot and Ch. Anjas Afterthought which all finished up back in Australia! Then Josie Everson of the famous Beau Jenn Boxer Kennels in Victoria brought out the first English Champion Boston, Ch Courtbarton Navylark (imp UK) which mated to the New Zealand bitches, established Bostons in Victoria. After 1970 Elaine Bond (nee Hrobat) established the Bostonway Kennels in NSW and Sue Sutherland concentrated her already established Baronrath Kennels on Bostons in Victoria. These two ladies have piloted the breed in Australia ever since.

Thanks to Sue Sutherland for the above information on the History of Boston Terriers in Australia.